Let’s just collectively agree to call this one “The Doomsday That Wasn’t.” 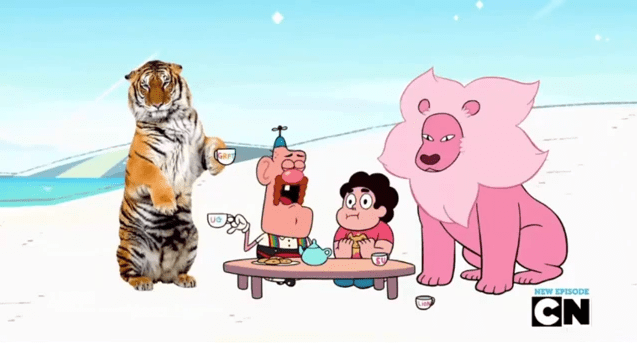 The Recap: Frustrated at his inability to call his shield (this episode is non-canon, by the by, but if it were canon it would take place before the events of “The Return”/”Jailbreak”), Steven ends up accidentally summoning Uncle Grandpa to Beach City. Hijinks ensue (literally the only version of the recap that didn’t involve a long string of “and then this weird thing happened and then” ending with Steven successfully summoning his shield in defense of Uncle Grandpa.

Some background information on your author in relation to today’s crossover: prior to this week, my experience with Uncle Grandpa was more or less limited to “those two minute intervals when you haven’t been able to successfully find the remote or stop the autoplay.” But in the interest of fairness, I spent a few hours over the last few days reviewing what bits of the show I could lay hands on. And I was pleasantly surprised to find that, when the jokes are in top form, the show has a really gutsy, bombastic visual style drug out of the weirdest corners of Cartoon Network’s ’90s lineup. One that is hypnotic to watch and would no doubt be deeply terrifying to the herbally-addled. Still not really my bag (even in two minute chunks it started to get a bit exhausting), but I can appreciate its strengths. Here we have a board-based show that has thrown caution to the wind and let the visual run mad.

Which brings us to “Say Uncle.” It… kind of works, given what it is. Large chunks of it do, anyway, which is a great deal more than I came in expecting. Setting it up as one giant joke straight off the bat certainly puts things on strong footing, and nearly everything on the beach feels like jokes that are semi-natural to Steven Universe’s tonal mentality and joke style with the addition of being turned up to eleven: the bees and cartoonified floating heads are out of the slightly goofier imagination spots Steven’s had in the past, say, and the added crossover tweak comes in having those image spots act as “real” occurrences for the Gems to react to. Similarly, Pearl’s emotional theatrics now have deforming animations to match. Moments like that make it feel not like the show is throwing itself out the window but letting off a bit of steam at its own expense without making things unrecognizable, a balance much easier said than struck.

The meta humor, I imagine, will be more hit and miss from viewer to viewer – it’s all fairly simple fandom awareness stuff (they know about Gemsonas! They know people were worried about this episode! Look at this list of nostalgic CN characters!), though I confess I found myself chuckling at the somewhat bafflingly placed but appropriately histrionic literal ship-sinking (is that a thing? Are people feeling in dire straits about Lars and Sadie? Really?) Then again, it goes along with the gentle self-deprecation this episode seems to be aiming for.

Things get a little more touch and go when the episode crosses over into the Uncle Grandpa universe (and not just because one begins to miss the beautiful pastel shades of the SU verse almost immediately), a move that gets more characters from the latter show in without invading Beach City but suffers somewhat in the way of balance. Almost all crossovers are destined to be weighted one way or the other, and this one was very much “a Steven Universe episode with Uncle Grandpa in it,” making it something of a stretch to ask for much investment in Pizza Steve (though in fairness, that did lead to Amethyst stealing the very best line of the episode) or Mr. Gus, never mind Giant Realistic Flying Tiger. Had I not done the aforementioned research I’d have been utterly baffled, and it almost runs the risk of killing the episode’s very necessary madcap pace (though I’ll be snookered if Mr. Gus’ legitimate pride in his Gemsona wasn’t just a little bit heartwarming).

The episode seems to know this too, ultimately, and it’s a relief to have Garnet bring us back to the relatively grounded scenario on the beach. The script even pulls out a win with Steven’s shield – while Uncle Grandpa is a generator of pure slapstick surrealism, Steven’s protective feelings feel earnest by the end of those eleven minutes, and it rings true alongside the “real” shield revelation in “The Return.” The Stating of the Message feels a bit more comfortable here than it did in “Joy Ride” as well, put as it is into the mouth of our visiting literal guru (the writers generally seem more comfortable going a bit on the nose with this episode – see also the spelling out of Steven’s “maternal instincts” powering the shield, or Fandom Beginner’s Discussion #72). At the very least, I can forgive it as a message that kids can never hear enough of, put into the mouth of a literal man-child riding a flying tiger. There’s something strangely respectable about that.

I’ve been told that the Crewniverse and the UG team are on extremely good, friendly terms, which I think explains the entirety of the elements that work in this little experiment: both teams clearly love the other show because it’s a Cool Thing their friends made, and that cuts down a lot in the usual fights over tone and joke style and character screen time; it’s why the character jokes and surrealism blend better if not seamlessly, and the episode is ultimately flavored by its visitors without losing the core of what the viewing audience has been tuning in for all along. It’s pretty close to a perfect example of what a harmonious fusion of creative teams might look like.

Well, close anyway. I think we can all agree that the position of “must have modern cartoon crossover” has already been filled. 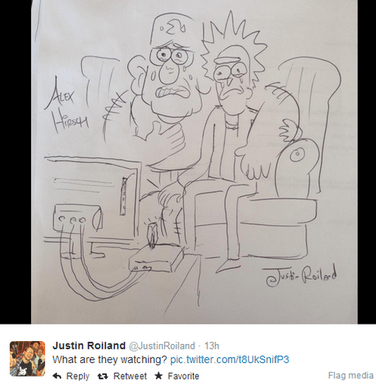 Seriously, internet, get on that fanfic. I’m counting on you.

Next week’s episode is the already legendary “Story for Steven,” so start stockpiling your tissues now. See you there, readers!

Vrai is a queer author and pop culture blogger; they in no way spends their free time stockpiling the shattered half-remembered dreams of thwarted enemies, though they do want to thank you for letting them use your basement. You can read more essays and find out about their fiction at Fashionable Tinfoil Accessories, or remind them of the existence of Tweets.