Some things can't be kissed better. 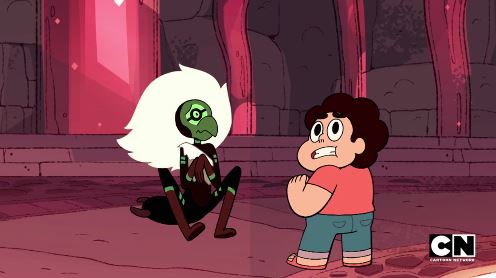 The Recap: Steven’s healing powers have returned, and he’s determined to use them to heal Centipeetle. But while he’s able to restore her partially to her former self, memories of her past keep threatening to revert Centipeetle back to her monstrous form. Corruption is harder to fix than cracking–maybe impossible.

Good news, everyone! The plot is back! Which means that so is the slow flaying of all my emotions! This is a barn-burner of an episode (oh God I hope I didn’t give them any ideas) with a lot of strengths going for it, so give me just a few more seconds for ugly sobs and then we’ll dive in.

Centipeetle has been a dangling thread for a while now, one of the first indications in the show’s early run, Madoka style, that the monsters of the week were actually corrupted Gems. Since then, her bond with Steven has become something of a running C-plot for the show, smartly building up our investment in this specific Gem even before Steven pours his heart and soul into the healing effort. And the visuals in this episode are very smart at playing on that hope and fondness: we’ve seen Steven save the day before, so it seems entirely plausible that the sight of healed hands and feet and hair might be the end of it…until it isn’t. Horrifically so.

The design for the half-healed Centipeetle is utterly gorgeous in its Cronenbergian uncanniness, sitting firmly in the uncanny valley of what we know of Gem designs but flexible enough to be almost-cute and grotesquely tragic when the scene calls for it. The sight of her face dripping both tears and acidic bile is a simple few frames, but it is a perfect summation of the character’s internal struggle. Molisee and Villeco seem a natural pick in hindsight, as they’ve helmed most of the body horror-heavy episodes in the past, but this feels like a masterclass of their previous work (even if I am a little disconcerted by the relative squat squareness of their Steven).

Even above that emotive design, the crown jewel of this episode is the sound design. Not just the instrumental compositions by Aivi and Surasshu, who lay a fine driving bed particularly for the rush to the ship, but the mixing itself. Centipeetle’s voice has depth and clarity, denoting when she’s moving toward or away from an uncorrupted state, and the pitch of her cries as she becomes distressed by her memories and begins reverting back to her monstrous form dominates the audio, becoming piercing and consuming alongside that building piano until the ship’s door finally opens and, finally, there’s a moment of silence. An auditory breath for us just as she reaches her goal. It might be the show’s best instance of instilling emotion in the audience through completely nonverbal clues, fitting perfectly into the theme of communication without words.

The use of simple drawings is not only a clever way to abstract the gory horrors of war while maintaining the emotional distress, it also calls back to Garnet’s descriptions of wartime Pearl in “Sworn to the Sword.” There’s a sense that memory itself is sketchy when going that far back, conveyed in the shape of its trauma rather than in concrete details (which then becomes part of Pearl’s own PTSD, with her apparently perfect projectionist memory).

And that subject of mental trauma looms large over the episode. Our heroes are almost all war veterans in some way, after all, and the episode takes time to show them grappling with this reminder of the past around the edges of Steven’s efforts. Pearl’s constant scolding of the comparatively young Amethyst speaks to her deep understanding of what it means to carry the aftermath of war, while Garnet’s initial willingness to re-poof Centipeetle until she could be fully healed recalls her initial pragmatic hardness in the earliest days of the series, apparently her own way of compartmentalizing and coping.

The idea of trauma as a corruption makes an effective metaphor, particularly with the finale of Centipeetle’s story (at least for now). While some people carry their scars internally, like Pearl and Garnet, others can be so reshaped by what they’ve suffered that it completely alters the course of their lives and how they interact with the world…but that doesn’t mean their lives are necessarily over. They’re inevitably different people, but they’re not worthless. Centipeetle is happy with her crew, who can support her and understand what she went through: another purpose for family, and something that Steven may have to come to terms with not being able to fix. This also clarifies another linking thread of the past week of episodes, that Steven’s accidental intrusions into people’s minds will eventually be crucial to healing corruptions (I would guess the first test drive involves Lapis or Jasper and the aftermath of being Malachite, given that the first appearance of this power was in “Chille Tid”).

To take a step back and look at pure plot details, it would seem that Centipeetle served in Yellow Diamond’s army (given the coloring of her commander), but was caught in the same wave that Lapis witnessed from the safety of her mirror–a “song” that was part of a “raze the earth” style tactic, presumably keeping any more Gems from turning to the Rebellion and presenting a credible threat to the remaining Diamond Authority (I’m deeply interested to see what musical culture is like on Homeworld, since song is so crucial to communication within the show). It also seems that Pink Diamond was fully cast out by the time of the Gem War and not after–though whether Rose somehow IS Pink Diamond or was carrying on her mission or killed her and usurped her authority or what remains unclear.

Finally, Garnet being won over by Steven’s puppy eyes was real cute. I haven’t mentioned how adorable their relationship is in a while, and it felt important to end on a good note. Because tomorrow’s episode involves Lapis, and was co-written by Rebecca Sugar herself. Prepare for devastation, is what I’m saying.

Vrai is a queer author and pop culture blogger; they are most emphatically not prepared. You can read more essays and find out about their fiction at Fashionable Tinfoil Accessories, support their work via Patreon or PayPal, or remind them of the existence of Tweets.