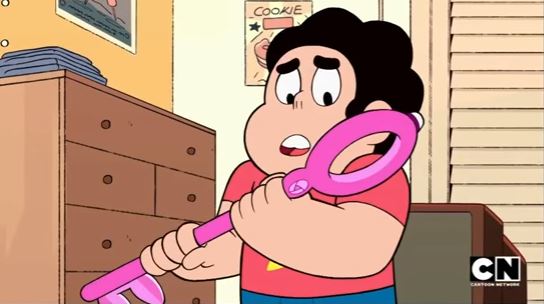 The Recap: After Lion coughs up a mysterious key, Steven travels around the world searching for the lock that fits it, hoping to find his destiny.

Welcome back, readers! Before we begin, please allow me to gently cradle my head in my hands for just a second. Cartoon Network’s airing schedule remains well beyond the ken of mere mortals like myself. This time around, the entire Steven Bomb’s been posted for legal consumption ahead of the air date–but only if you access it through CN’s mobile app (though this first episode was initially releaked following “Room for Ruby”). Which … is one way to deal with a company’s shoddy security protocols, I suppose. It also means that most of you will likely have seen the entire bomb ahead of me by now, but I hope you’ll indulge me in carrying on with the ostensible airdates just for the sake of convenience, as well as anyone who didn’t get the incredibly circuitous memo. As always, if you have watched ahead please be mindful of spoilers in the comments.

So, Lion. It’s kind of the episode to open with a reminder of the tape Rose left, because “Lion 3” aired back in December of 2014, even before the first Steven Bomb. Like the rest of us, Steven has is trying to wring out the little information he has from Rose herself for clues, and he’s run his nerves ragged as a result. The stress of this season’s events are weighing on him, and Callison sounds painfully exhausted in a way that extends far beyond his years, carrying the majority of the episode on his own with ease.

This is an episode about re-contextualizing old sights, and each old location is tinged with increasingly frantic anxiety. We see in quick succession just how ubiquitous Rose really was, and the intimidation of her legacy is hammered home by seeing those gardens, armories, and temples strung together. The other Gems had places they affected as a unit, but Rose had statues built in her honor. All of that has been around Steven from the beginning, but there are far greater stakes now than Steven’s personal sense of loss at having never met his mother. Things that preserved her memory are now monuments of her leadership successes and failures.

Fortunately, the end of the episode is a release valve on the tension that’s been building with the season’s arc. While Steven’s relationships with the other Gems has been complicated by invasions, kidnappings, and other resurgences from the past, Greg remains a pretty solid presence: he knows who he is, he’s addressed his biggest interpersonal conflict in “Mr. Greg,” and for our purposes here, he was the closest to Rose in her final years without the additional baggage of who she was as a rebel leader. He’s a great pillar for Steven right now, both as a good (best) dad and as his own sort of authority on Rose.

The idea that Rose just wanted Steven to be himself isn’t a revolutionary one, exactly. That was the content of the first tape, after all, and the second take isn’t that much different. But like the imagery in the episode, the repetition has value in this new context. Whatever ripple effects and fallout resulted from Rose’s actions will still have to be dealt with, because Steven’s decided to protect the Earth. But he needed a reminder that he isn’t beholden to who his mother might’ve wanted him to be. What matters is his ability to choose who he wants to be, and the freedom to chase that with the support of his loved ones–that’s all any parent wants for their kid, even former rock stars, and even former rebels.

It’s a great message given without fanfare (even if the name fakeout is obvious pretty much immediately), and the cool colors used during Greg and Steven’s talk are a nice talk on a pure design level, flipping the usual approach where bright colors and lighting are usually hopeful and positive (here it’s the desert, which poor Steven doesn’t take well) and dark colors and nighttime are more likely to be melancholy or ominous (whereas here the dark is less harsh, and the purples have a calming hue). It’s not the first time the show’s done this, but it fits with the season’s interest in experimentation and, particularly given that it’s the fairly new Florido-Villeco team, I wanted to point it out.

Speaking of plots the show hasn’t touched on in a little while, does anyone else miss Connie? Particularly Connie and Steven spending time together? The next new episode involves not just that, but finally shining a focusing light on Connie’s father. I know I’m looking forward to it. Hope to see you there!

Vrai is a queer author and pop culture blogger; they’re their own self-sufficient salt mine. You can read more essays and find out about their fiction at Fashionable Tinfoil Accessories, listen to them podcasting on Soundcloud, support their work via Patreon or PayPal, or remind them of the existence of Tweets.