Steven Universe Recap: “Last One Out of Beach City” 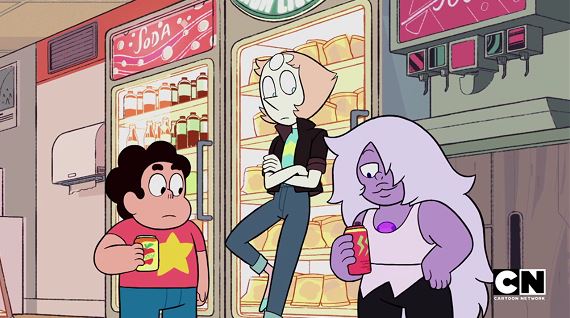 The Recap: Pearl offers to go with Steven and Amethyst to a concert, meaning to cut loose by gently moshing and drinking juice. The plan goes a bit haywire when Pearl and co. wind up chasing a cute mystery girl and running from the cops instead.

At first blush, it seems like we’ve seen a lot of Pearl and her struggle to move past Rose’s death–but in the broader context, it’s been more than 20 episodes since “Mr. Greg” and Pearl’s big number. The time’s just about right to see her finally try to test out being a “new gem.” That it’s packaged as a spin on the old 80s nerd-makes-good formula, with a rare spot of guest music by Mike Krol to really add to the sense of it being a road movie, is just icing.

Speaking of that formula, actually:  it’s worth mentioning how often those movies had basically nothing to do with the love interest; instead, they were about the main character learning confidence and proving themselves in some way, and The Girl was won over at the end as a fitting prize for the hero’s growth. And that’s technically not untrue about the Mystery Girl. We don’t know anything about her. We don’t even get to hear her speak, and it’s possible we’ll never see her again (more on that in a minute).

This story is all about Pearl and her issues, with a few bits of background detail on the side–what Amethyst and Pearl’s dynamic might’ve been like before Rose’s death, since it’s said they were close; and where Stevonnie might’ve learned all those sweet moves they used in “Beach City Drift.” More than that, it helps knit together the image of the Pearl we saw in episodes like “The Answer.” It’s not just that precision is in her character–it’s clearer than ever that the scars from Rose’s death pushed her above and beyond, into trying to be perfect as a way of holding onto control; and maybe, just maybe, keeping her newly fragile world from falling down all over again. Pearl going overboard in future episodes to prove she can disregard the rules might be disastrous (and not out of the question, if her punk rock beau does make a return), but a willingness to take a few risks and live instead of just struggling to survive is refreshing.

This is an astonishingly straight (ha) take on the storyline in the most basic writing sense. What makes it revolutionary, as is so often the case with this show, is that it’s queer. It’s casually melding the type of relationship with a well-worn comedy cliché in order to normalize it– in fact, I found myself downright impressed while watching, imagining how they snuck this past whatever censors got to those old ladies in Gravity Falls. The script never actually says Pearl is interested in this girl, y’see. It’s literally all implication, using the touchstones of a hundred million heterosexual romances, aggressively stepping up to a line that’s been used to justify erasure over and over again: is it really true that if a character doesn’t loudly state their sexuality every second, they must be straight? Why is queer desire so apparently aberrant (Not That There’s Anything Wrong With That etc.) that only a weirdo would assume it was purposefully implied, unless the confirmation was delivered and signed in triplicate (at which point it’s being “shoved down people’s throats”). There’s really no winning, so it’s refreshing to see those assumptions challenged, even if it’s just one brave show out there on the frontier. For now.

…Actually, I imagine there will absolutely be people somewhere saying that Pearl obviously wasn’t hitting on Mystery Girl. I’ve been on the internet too long not to know that.

As to what happens from here, we’re at something of a character crossroads. On the one hand, this might be interesting as a one-off appearance. It’s less than common to come out of a (VERY) longterm relationship and then strike gold with the very first person you hit on, and I’m a bit concerned about the fact that Pearl was attracted to her specifically because she has hair like Rose–that’s no good for a relationship to have the “you look just like my dead ex” thing hanging over it. Not to mention that even with the best outcome that’s another tragedy shoe waiting to drop in about fifty years.

On the other hand, it would be a really nice opportunity to explore what happens after that bog-standard trophy-getting ending, and how an actual relationship forms from that. It would offer Pearl an opportunity to finally understand what it means for a Gem to fall in love with a human. And it would mean a new person in Greg and Connie’s two-person support group–how’s that for an experience to come into for her? And what kind of person is she, anyway?

…Alright, I would really like to see more of Mystery Girl.

The next episode seems to be our seasonal hangout time with Onion. That’s probably a good thing–who knows what that kid’s gotten up to while we haven’t been keeping an eye on him. See you there!

Vrai is a queer author and pop culture blogger; every time they think they couldn’t be happier with this show, they’re proven wrong. You can read more essays and find out about their fiction at Fashionable Tinfoil Accessories, support their work via Patreon or PayPal, or remind them of the existence of Tweets.