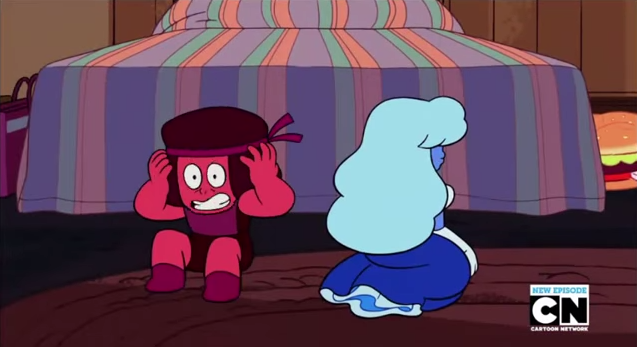 Has someone signed Peridot up for the Hide-and-Seek World Championship?

The Recap: Eager to get away from the tension at home, Steven jumps at the chance to go with Greg on a road trip across state lines. Garnet tags along, but her conflict over whether to forgive Pearl causes her to split back into Ruby and Sapphire.

It says something—in fact, it may say a great many things—that this episode is a real breather after “Cry for Help” and the ending of the last Steven Bomb. It’s not just that it ends on an upbeat note, either—this episode is absolute comedic gold, getting excellent mileage out of Ruby’s loose, exaggerated animation and laying some truly golden one liners at Greg’s feet (the current contender for best is still tied between “if I’m not back in an hour, call the police” and “someday, you’ll learn to appreciate all pizza”). There a dozens of clever little touches too, from Garnet’s distress presenting as distinct fidgeting in either hand to Steven’s little call back to “Cat Fingers.”

Setting aside the events of last episode for a moment, this was an episode we very sorely needed. Our previous two encounters with Ruby and Sapphire have been in moments of potentially deadly conflict, times when it was necessary for them to pull together and protect one another. And while their loving bond was and is heart meltingly adorable (not to mention hugely important to family media), it’s still been somewhat flatly written compared to the show’s other romances.

In a way it’s reminiscent of Welcome to Night Vale’s “Condos”—a watershed moment for a beloved couple that strengthens them by the very act of admitting that their love isn’t perfect. Long-term, healthy relationships (especially ones where the participants, y’know, like each other) are fairly rare in media, and the few that do exist are by and large heterosexual. Seeing not just a loving couple but a queer couple who’ve moved out of the dizzying infatuation stage into the comfortable love and occasional spikes of serious conflict sets a wonderful example across many age ranges, and the way the episode is framed allows access points for young lovers, committed couples, and kids to potentially relate to. The fact that Ruby and Sapphire do it wrong first is almost as wonderful, in its way, as watching them make up—and it is an exceptionally lovely reconciliation, sewn up with mountains of unspoken history and sentiment in less than three minutes.

But even that is background to what’s going on with Steven. In “Cry for Help” we saw how much he (along with Amethyst) has grown up, his naturally kind and easy-going nature having evolved into the role of peace-keeper among the Gems. He’s risen admirably to not just the joys but the burdens of being a full member of the team; or, to quote a series SU is itself quite fond of nodding to, “becoming an adult means learning countless sad things.” And many of these problems, particularly the Earth-threatening ones, are things Steven will have to face for a very long time.

Which is all the more reason to be distressed at how the Gems have been failing him emotionally. More than ever, Steven needs a reliable support network that can give him someplace safe to retreat to while he sorts out life’s scarier realities; people who’ve been there before, and can help him put life’s challenges in context as he grows and matures. Greg has kept on doing a bang-up job of that (one gets the feeling more and more that he’s well trained with Gem meltdowns), and Amethyst is clearly doing her best while still grappling with her own problems. But it’s not enough.

Pearl and Garnet have been Steven’s closest approximations to traditional mother figures for a long time now, his sources for reassurance and knowledge. It would be hard enough just to see them so haunted by their own griefs—Steven is quite a bit younger than the age where most kids realize that their parents are fallible—and we know that Steven already feels a considerable heap of survivor’s guilt for being among the Gems instead of Rose. He’s already predisposed to blame himself for his loved ones’ unhappiness, to try and take on the pain of others (hence his healing powers). And in the midst of their fighting neither Garnet or Pearl have even thought to…well, they haven’t really thought of Steven, to be honest.

In the darkest moments of conflict, Steven seems to serve as an almost abstract idea for the Gems: he’s the innocent to be protected, he’s the link between Gems and humans, he’s the remains of Rose. And while they undeniably love him, they also seem to have trouble grasping that he’s growing up, that he’s aware of and affected by their actions and behaviors. Ruby and Sapphire’s elemental powers are a deft visual metaphor for the emotional damage Steven’s been suffering from the tension in the Gem household: neither of them mean to hurt him, and may not even notice that something exuding from them without conscious thought on their part would affect someone else. They’re even trying to humor Steven in the midst of their argument, clearly thinking they’re successfully keeping him out of it. But Steven still gets scalded. He still gets cold. And the fact that they didn’t mean to do it doesn’t make the effects any less tangible. Divorce stories in media have touched on this subject matter before, of course, but there’s something uniquely gut-punching to it when we’ve spent so long coming to love this cast only to now have to watch them hurt each other.

The finale continues what I’m almost prepared to call a trend for this week in terms of baby-stepping through feelings. Garnet’s not ready to forgive Pearl, and she shouldn’t have to be. Pearl did betray her trust, and did so regarding something Garnet holds dearer than the entire world. To say all is forgiven at this point would only leave unaddressed resentment later. But Garnet’s “not now” is also a very healthy way to deal with anger—as a legitimate feeling that should be allowed, experienced, and then released with time. It’s a rare show in American media that recognizes the validity of negative emotions in our lives (although on the subject, if there aren’t already a deluge of parody/crossovers with Ruby and Anger I will be both surprised and disappointed).

In a small moment of silver lining, it seems that Pearl and Amethyst have become closer as a result of their disastrous fusions with Garnet (I’m in love with the little comforting mug of tea set out on the coffee table beside them). Those two have always had a certain “flip sides of a coin” aspect to their relationship, stemming in part from dealing with shared feelings of worthlessness with polar opposite coping mechanisms (not unlike an Asuka and Shinji, I suppose). I don’t know if this will mean a better-harmonized Opal in the future, perhaps as an attempt to work toward feeling strong by working together, but it’s touching to see them bonding. It doesn’t erase my worry at the fact that Pearl’s been working herself into the ground to try and prove herself to Garnet (exhaustion is certainly a recipe for better emotional clarity, alright), but it’s something positive to cling to.

It looks like Wednesday is stepping away from the Gem Household to visit an under-explored side character. I’d say you should prepare yourselves, but none of us will be ready for “Onion Friend.”

Er, sorry. I’ve been spending a lot of time with a certain character recently. Anyway, Onion mysteries. Hope to see you there!

Vrai is a queer author and pop culture blogger; they were unaware that the Crewniverse was chronicling their family’s summertime motel stays so closely, but are glad it helped. You can read more essays and find out about their fiction at Fashionable Tinfoil Accessories, support their work via Patreon or PayPal, or remind them of the existence of Tweets.