Steven Universe Recap: “Keeping it Together”

Alright, let’s all hold hands and talk through this together. 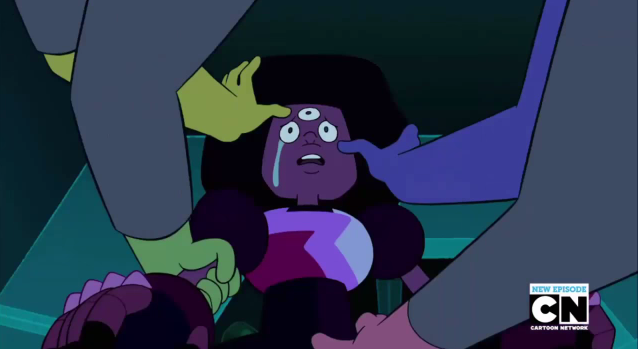 The Recap: The Gems head to the abandoned Kindergarten in search of Peridot, and find her overseeing the progress on horrific Gem fusion experiment, carried out on the shattered remnants of the fallen supporters of Rose’s rebellion.

Last night can be pretty well summed up by the phrase “not like this.” We wanted Peridot to come back! But not like this. We wanted to learn more about Garnet’s life as a fusion! Never like this. It has frankly come to a point where I am afraid to type words lest the Monkey’s Paw machinations of the crewniverse twist my words into some pitched irony of themselves. All of which to say this was a marvelous episode, and I can’t wait to talk about it.

Small things first, as ever: the tiny callbacks have been some of my favorite things in this particular run, from Steven’s bubble at the sight of Holo-Pearl to Amethyst’s pained look as Pearl describes the intended purpose of artificial Gems. And the Kindergarten itself remains one of the most gorgeous of the show’s sets, with the muted dusky purples and blacks allowing the rare signs of life (the horrible red crystals on the incubators, Pearl’s searchlight) to pop out like raw wounds on the landscape. Its sparing use is no doubt key to its effectiveness, but I cannot give enough props to the hard working background artists and colorists on this show. Estelle gets the chance to really bring the house down as well, showing off how well she’s mastered building layers into Garnet’s intense stoicism. It’s easy to forget in the moment that it’s not “really” Ruby and Sapphire (as we heard them in “Jailbreak” speaking) as Garnet processes what they’ve seen.

This episode is basically the worst kind of nail in the coffin of “fusion is, as reclaimed by the Crystal Gems, a romantic metaphor and at this point if Steven fuses with his moms my skin will crawl right on off my body.” It’s also at once the heaviest topic I’ve ever seen addressed on a show ostensibly for younger audiences (and I’m including everything about Simon Petrikov in that statement) and the single best way I can think of for such a topic to be broached—the importance of consent is one of the most important things we can instill in the younger generation, and framing it through forced fusion carries across the horror of losing one’s bodily autonomy and the warping of something loving and wonderful without needing to venture explicitly into a conversation about sex.

It also cuts out the horrible justifications of rape culture in doing so—nobody is going to say those Gems shouldn’t have been buried there, or that perhaps they led Homeworld on into believing they wanted to be experimented on. There is nothing of the loving ideology that makes up Garnet here. It’s nothing but a way to exercise power over other individuals, to scar them as a means of controlling them. And the show balances, as much as is possible, the trauma of such a topic by bookending the episodes in the safety of the community Garnet and the rest of the Gems have built.

The appearance of the monstrous fusion is a masterful use of body horror at its purest level, finding a place between the humanoid Gems (even the somewhat frightening Alexandrite) and the animalistic corrupted Gems that feels anguished and trapped in its every angle and movement (its distorted screaming and multiple attempts to split into individual parts are haunting). It seemed the fusion was cognizant enough to keep from attacking Garnet and even to recognize her on some level. Take your pick of agonies on that one, by the way: was it grabbing hold of her to comfort an old comrade even as they felt unimaginable pain; or because they recognized her as a fusion and were attempting to pull her apart, so that she might avoid the suffering they were feeling?

Oh, and about those fusions…we’d better talk about Peridot, hadn’t we. I’m still firmly team Homeworld Gem Redemption and this episode hasn’t done much to change that, aside of the fact that Peridot reminds me more of a slightly smarter Zim by the day. We get to see quite a few interesting little character quirks in the few minutes she’s on screen: the formal voice she uses to number her log lapsing almost immediately into a very informal complaint, her cautiously neutral behavior toward Steven when she thinks he’s alone versus her immediate retreat from a known threat, a hint of unexpected shortsightedness in not predicting that Pearl hadn’t been aiming for her. And of course the Pericopter, a phrase I can’t take credit for but remains my single favorite animation of the episode.
Peridot’s reaction to the experiments intrigue me even more.

First of all, it seems fairly clear that she wasn’t the one actually carrying out the shard fusions: her log refers to the fusions “progressing,” which is the statement of a scientist checking on a culture rather than running an active test; Garnet also notes that Peridot pulled the fusion tubes out of the walls, and those things look quite old; the fact that they’re formed from Garnet’s missing comrades suggests that they were collected and forced together in secret while the Homeworld forces were still on Earth, and Peridot’s mission was to see if that was still a viable experiment.

The cherry on top of all of that is Peridot’s disinterest in what happens to the fusions once she’s recorded the data. That suggests she’s not dedicated enough to the Homeworld to go outside the letter of her job description (we already know she picked Earth to get an easy gig). Combined with the tone of her one-on-one with Steven (“is she hurt,” by the way, warmed my heart to a degree immeasurable by known units), we’ve laid the very bare bones of a promising future here.

That’s not to say Peridot gets a free ride, by the way—whatever her cultural conditioning on fusion (going to guess it’s not great, though she’s distinct from Jasper in seeming to have removed emotion from her perception of it entirely), she’s still complicit in a monstrous act, and will probably be totally fine with sending the results back to Homeworld as soon as she’s able and thus facilitating more such experiments. But, I mean, look at Pearl—her view of humans is still pretty bleak and condescending after thousands of years, and it seems the only reason she agreed to stay in the first place was to be near Rose. All of our Gems are misfits and outcasts battling the conditions of their birth and their upbringing. With Steven to bring her around, I’d say Peridot will fit right in.

Thursday’s episode is a Greg story! Given the rollercoaster that’s comprised the week up to now, we could end up with anything from Grose having wacky adventures around Beach City to some kind of emotionally devastating account of the Crystal Gems reconciling the old views on fusion with their new, loving community. I’m game for either at this point, frankly. I’m here for the crying. See you then, readers!

Vrai is a queer author and pop culture blogger with a frankly embarrassing love for under-committed and slightly incompetent antagonists. You can read more essays and find out about their fiction at Fashionable Tinfoil Accessories, support their work via Patreon or PayPal, or remind them of the existence of Tweets.