This will be a VERY formative experience for him. 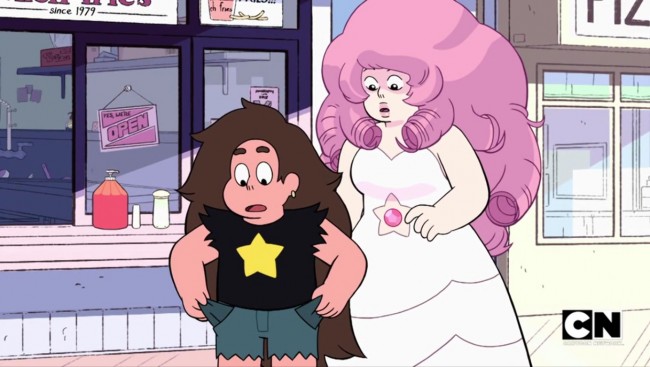 The Recap: Greg tells Steven about how he got his job at the car wash after a disastrous day of babysitting an infant Sour Cream.

This episode delivers something we’ve needed for a while, particularly now that Steven is developing his powers and becoming more proactive: a better sense of Rose as a person. Our glimpses of her have still been minimal up to this point, and most of them were staged somehow, from leaving Steven a message to playacting the Manic Pixie Dream Girl for Greg to the legendary warrior of “The Answer” and “Rose’s Scabbard.”

Rose is someone who seems to be always performing, presenting the face that people need to see in order to move those around her toward what she seems to think is the greater good. It’s telling that the moment that really cemented her relationship with Greg was the one genuine break in that façade. And it winds up being somewhat telling here, too.

Rose’s monologue about Gem determinism versus human free will gives us a glimpse into how she sees the world: Gems are taught to do one thing forever from the moment they’re born, and I would bet that includes Rose; so no matter how she came to desire a different way, that initial mindset would still inform how she tries to bring others to her side. Once Rose realized that Greg was totally alien in worldview as well as species, and someone she could really talk to, it seems as if it was inevitable that she would love him. This also seems like the moment when Rose really starts thinking about children in regards to her relationship with Greg – and there’s no doubt Steven’s birth was part of some larger plan, even if her love for Greg was real.

But even with all that serious talk, it’s nice to just see them just spending time together actually enjoying one another’s company. The musical montage at the beginning of the episode might be its strongest note, able to convey joy and creeping desperation and the downsides of having a fantastic alien girlfriend through song (and Greg, I hope Steven never stops asking you for songs). The image of them just hanging around and reading goofy books together is the kind of grounded domesticity that the end of “We Need to Talk” opened the door to, and it’s nice to see that potential fulfilled. With the tragedy of loving Rose hanging so heavy over the series, it’s nice to get a little bit of happiness too.

With all that talk about Rose aside, this is really Greg’s episode. And it falls down a little more in that aspect. The babysitting stuff is cute, a nice foreshadowing for how good Greg is with Steven, and the various hijinks have a solid madcap energy (even if the whole thing could’ve been solved by asking Rose to fly up there any get Sour Cream in the first place). It’s also nice to see Vidalia, who is the best, and eternally chill baby Sour Cream; and the scene of Greg mooching some cereal is definitely the work of someone who’s been there, hungry and well-meaning and still kind of thoughtless about their impact on others.

Like “Alone at Sea,” the statement of message here ends up being pretty blunt. But that episode had the excuse of wanting to clearly convey an important subject not frequently discussed in media made for (or to include) younger audiences. This is basically a more positive spin on that trite “growing old is mandatory, growing up is optional” saying that’s been slapped across a million bumper stickers and $5 shirts, and it winds up feeling more cringey as a result.

Though the portrayal of Greg’s situation is more nuanced than many other series might bother with. It’s not that he needs to grow up and give up his dreams for a steady job – he’s clearly lost his passion for music as a career, and just wants to be with Rose. And it isn’t that he lives in his van, which the show’s never judged. Rather, Greg’s problem is that he’s still “a baby.” He relies on others without really being in a place where he can give anything back, and he realizes that he doesn’t want to do that anymore.

It’s almost a companion to “We Need to Talk,” with Greg struggling to be a self-sufficient person who can contribute mutually to his relationships, in the same way he wanted Rose to be open and honest with him. Getting a job is what helped him feel secure and able to take care of himself. And finding that happy medium with Greg, a character who’s never fit into the typical American mold of “successful productivity,” is an interesting piece of nuance. It’s just kind of a shame that it didn’t get to stand on the sole strength of past-Greg’s realization.

And that’s week two of the Summer of Steven! Eleven episodes down, ten more to go. I hope you’ve all had a grand time. Next time we can all look forward to meeting a new Gem, the show’s first half-hour special, and what looks like a pretty continuous run of plot progression. In the meantime, I’m going to collapse into this pile of moving boxes. See you next week!

Vrai is a queer author and pop culture blogger; they’re going to spend the weekend wondering how Anne Rice thought “mermaid/vampire crossover” was a good idea. You can read more essays and find out about their fiction at Fashionable Tinfoil Accessories, support their work via Patreon or PayPal, or remind them of the existence of Tweets.