No way this can go wrong. 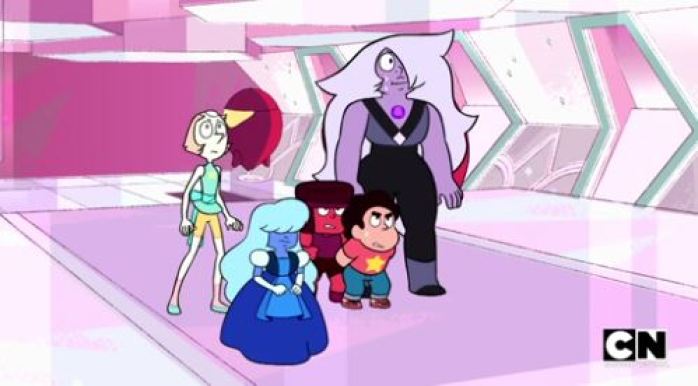 The Recap: Steven and the Gems attempt to infiltrate the Zoo and rescue Greg from under the watchful eye of Holly Blue Agate. Unfortunately, their plan is cut short when word comes that Blue Diamond is on her way, and Steven winds up processed and trapped inside the zoo himself.

Episodes like this one are always a little hard to talk about on their own. While this one introduces a new character and fleshes out Blue Diamond’s order a little more, also giving us a chance to see more of Homeworld’s modern version of the caste system in action, most of what’s up for speculation will likely be answered as soon as the new episode airs. The fact the zoo’s captivity is being set up as a sort of walled garden, say, or that apparently the humans Pink Diamond originally abducted managed to thrive in some capacity. And Blue Diamond herself, along with her Pearl, will no doubt be the capstone to the Bomb. In the meantime, we have time to acclimate to this new setting, which is in keeping with the geometric design of ship interiors we’ve seen up to now… kind of.

The show’s been getting a lot of mileage out of how the colors of the Diamonds affect the feeling of their various domains, even when things are theoretically created to be uniform. Here, the backgrounds of the zoo are soft, pastel-leaning pinks and greens while Blue Diamond’s assigned staff are predominantly rendered in blacks and very cold, dark blues. There’s a visual sense of something broken and crudely held together, by duct tape or large seams. There’s always a sense of individual character leaking out of the seams, despite the fact that this is a society built on manufactured sameness. Whether that means it’s malleable or doomed to implode remains to be seen.

What we have is largely character-based shenanigans, keeping with this Bomb’s streak of playing to each writer/boarder pair’s strengths. Florido and Zuke have a knack for visual humor in particular (which may be part of why they so effortlessly nail Peridot episodes); little touches like Holly ordering her Amethysts around like unruly school children help sell a sense of how the Zoo’s been running for the last few thousand years in quick moments.

On the subject of Amethysts, it’s somewhat disappointing that she’s shuffled off so quickly after a brief nod to her lingering insecurities, while everyone else gets at least a brief chance to chafe against their assigned roles over the course of the tour. Sapphire gets the best showing, able to show a little more range as she lowkey panics over trying to change the future she’s seen (in a nice follow-on from Garnet’s insecurity in “Steven’s Dream”). Pearl and Ruby are within emotional beats we’ve seen before, though it might prove a future problem to see how “the hacker” Pearl struggles while trying to interface with the zoo’s updated technology.

But this is another new character episode (or, to be a little more honest and precise, a new Gem episode), so it’s somewhat expected at this point that the main cast will recede at least a little to give the guest player room to shine. Christine Pedi (also a Broadway alum) is nicely officious and oblivious, walking a line that’s well within Gem assumptions of superiority but doesn’t quite dip over into Umbridge levels of awfulness (though her design is somewhat Trunchbull-ish). It’s becoming one of the most characteristic points of this arc, and I remain impressed at how skilled the Crewniverse has become at selling us the desire to see these characters stopped but not killed, even now that we’re well aware of how dangerous and damaging Homeworld-as-monolithic-power is.

We’ve also ended up in a place where Steven’s situation is entirely reversed. After spending most of last season agonizing about feeling like a Gem among his human friends (and as an adult rather than a child, a struggle taken to comedy extremes here by having Holly dismiss his complaints as barking… which Steven is then happy to use to his advantage), he’s now been categorized as solely human in a small segment of totally Gem-controlled society. While I highly doubt he’ll be tempted to forget Earth or his place as a Crystal Gem, there’s huge potential in getting to see his interactions with people who are technically more “human” than him, but who’ve developed so differently as to be practically aliens themselves. But that’s a story for next time (which I would bet we spend almost exclusively in that human enclosure). See you then!

Vrai is a queer author and pop culture blogger; they were not prepared for these Blue Diamond feels. You can read more essays and find out about their fiction at Fashionable Tinfoil Accessories, listen to them podcasting on Soundcloud, support their work via Patreon or PayPal, or remind them of the existence of Tweets.