This episode probably plays great in the Berenstein universe. 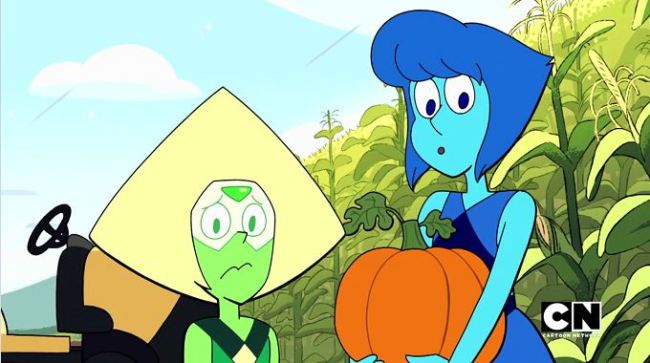 The Recap: Greg’s estranged cousin Andy shows up at the barn and wants to chase the Gems out, so Steven tries to win him over with a big meal and convince him that the Gems are family too.

Well…this has never happened before. I think we can mark this up as the first time Steven Universe’s relentless optimism has ever worked against it. Episodes take months and months to write, storyboard, and animate, not including the time Cartoon Network kept it on a shelf waiting for November to come around (which I’d say they demonstrably did–a few minutes of the pumpkin dog leaked way back in October). And while things are always changing, this is the first time it’s felt so much like we’ve stepped into a different universe overnight.

This is an episode created with the assumption that we’d be heading toward a Clinton presidency. Why shouldn’t it have been? In all likelihood it was written this summer if not before, when polls were trending toward a landslide victory. And it genuinely pains me, because in that universe I think this episode by and large would have worked (though trying to reclaim a new context for Thanksgiving might’ve bitten off more than they could handle in any universe, let alone on top of Andy’s raving about illegal immigrants; those are some high hopes for the murder holiday there).

In the world the Crewniverse must’ve been hoping for, we’d have a world where we’d be awaiting our first female president, who would have the power to confirm a progressive Supreme Court justice, and maybe even the support of a Democratic House and Senate. Things wouldn’t be perfect, because they never are, but they would be historic. Moving toward a better tomorrow. In that universe, it absolutely makes sense to write an episode where the Gems, under verbal assault but comfortably the majority throughout the situation (seriously, Andy can yell all he wants but he can’t actually make Lapis and Peridot do anything), have the luxury of being able to reach out and try to welcome this ultimately misguided man who is just looking for a family; given the way he talks about Greg’s queer aunt Deb, it’s clear the writers were going out of their way to sell him as someone who’s compassionate when he actually knows a person.

I want to live in a world where that story can work, because I think it’s a poignant one, especially for queer kids who want to try and salvage a relationship with their more conservative family. And there ARE absolutely cases of older people who are baffled and scared by change as Andy is here, but good enough deep down that they can come around with patient education–heck, I can attest to that in my own life. It’s not a universal experience, but it’s one that would be in keeping with SU’s aspirational tone. And there are some nice things in this episode–Pumpkin is very cute and I hope we can see them again, Peridot and Lapis have stupendous chemistry as always, and the fall color palette is rich and lovely. But I can’t really talk about those things, because…well. You know why because.

That’s not the world we live in anymore. And yes, arguably it never was–there’s always been racism, homophobia, Islamophobia, and the threat of violence toward people who are Other. But we could believe that at least the world was trending toward positive change, and that we were being vindicated by the public at large. Now it’s not just that those people are out there. They’re coming into power, and fear for one’s life and civil rights is now a day-to-day reality.

If we had an analogue of this episode for this universe, Andy would show up to the barn with the fucking Breaking Point on hand, and half the inhabitants of Beach City would shrug and turn away while the rest actively joined in now that they had an accepted outlet. Ours isn’t a world where we’re predisposed to sympathize with an outdated conservative racist and believe he can come around, because we’re all too busy worrying that exactly that sort of person might beat us to death in the street.

And I honestly don’t know where that leaves us. Steven Universe has always been a show that believes relentlessly in giving people second chances, that if you open yourself up we’re all redeemable. I’ve always loved that about it. And maybe it will be even more comforting for that now, to have that fantastical escape and root for Steven to heal the world with his relentless understanding. It’s never been blindly optimistic, with so much of last season dedicated to questioning the complexity of Rose and her leadership. But it’s been an unwaveringly hopeful, compassionate show. It’s really not equipped to handle the despair and anger that’s bubbling so much to the fore, and I don’t know how important that will be to people. This is a universe where it’s a damn good sight that Rick & Morty is coming back soon. “Everything’s fucked but don’t give up” is about where we’re collectively at right now, if I might be so presumptive.

So, I don’t know what’s going to happen from here. I would guess that a good chunk of the season has already been written, though who knows if this real-life tonal dissonance will crop up again so fiercely in the coming weeks? I know I’ll be here recapping, anyway, and wanting to keep on believing in Steven. Hopefully we’ll get through this together. The next new episode will be in early December, so….I guess we’ll see, huh? Take care of yourselves out there.

Vrai is a queer author and pop culture blogger; they feel so bad for the Crewniverse right now that it’s physically painful. You can read more essays and find out about their fiction at Fashionable Tinfoil Accessories, listen to them podcasting on Soundcloud, support their work via Patreon or PayPal, or remind them of the existence of Tweets.