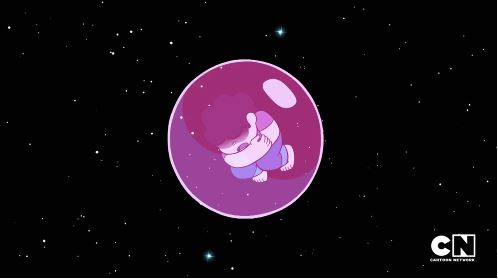 The Recap: Steven is stuck floating through space in his bubble, with Eyeball as an impromptu passenger. While the two initially bond over their attempts to survive in space, Eyeball turns murderous when she learns Steven is actually Rose Quartz.

Having already tread the boards of pathos, the Steven Universe season 3 finale decided to go in a different direction: discomfort. Steven’s time floating through space layers comedy and violence on top of one another by turns, establishing something like comfort only to yank it away and leave us feeling very, very alone and uncertain in a big, bad universe. In spite of not being quite the episode I was expecting (that’d be something more along the lines of Futurama’s “Godfellas”), it wound up as quite the fascinating attempt to grapple with the mess of ugly emotions the last few weeks have unearthed.

Liu and Howard’s boards make excellent use of the space environment–since there’s never really any doubt that Steven will be rescued, the camera instead focuses on the psychological impact of being something small in such a large, cold space. Steven’s bubble makes even the stars look dull, and yet he has no control over where he goes nor any ability to help Eyeball or the other Rubies (or anyone) once they float out of his grasp.

The more that pressure exerts itself, the smaller the bubble gets, and it’s effectively hard to watch while also giving the show’s stellar background artists yet another chance to show off their stuff. I’m also fairly certain there’s an homage going on with the image of the shaft of light from the ship hatch falling on Steven, but I’m so caught up on thinking about Pearls as made-to-order Rose Brides that it’s eluding me at the moment (is it Evangelion again? I feel like there was a shot like that when Shinji was rescued from the Dirac Sea; but I digress).

Speaking of, Eyeball. That two seconds alone said a whole lot about what Pearl got away from in about the darkest way you can manage on a show with kids in the audience. We got a bit more expansion on Rose’s role in the rebellion and how Homeworld’s surviving soldiers are taught to see her; but most impressive of all is Eyeball herself.

We talked about the show trying to do too much in “Bismuth” and sort of giving that character the short shrift as a result. But while Bismuth has been bubbled away into the Hall of Guest Actors, the ideals she stood for came back in a major way here. This episode acknowledges the hard truth that sometimes death–whether your own or someone else’s–is the only way to be free from oppression. And it lets that truth be ugly and beautiful, focusing on Steven’s sadness as well as the stories of the Crystal Gems.

Which means that, in all likelihood, Rose’s problem with the Breaking Point was the soldiers it would shatter, who hadn’t been offered the chance to change. Soldiers like Eyeball, who’s had a sum total of three appearances and yet shows off a majorly multi-faceted (not sorry) personality here. Charlene Yi gives maybe her best performance as a Ruby, equal to or even surpassing “The Answer.” Eyeball has some of the same notes of anger as our Ruby, but she’s also the grizzled soldier, bitter and scarred by the war; she’s ridiculous and goofy, lonely and vainglorious. And her impromptu truce with Steven shifts frighteningly quickly to a murder attempt once she feels she has something to gain from it.

The episode shies away a little bit from the full horror of the attempted child murder going on, cutting to medium shots of super-deformed li’l Steven and Eyeball running around the bubble and playing up some exaggeration shots, but when the moment of truth comes it’s a real hard sit. This is the soldier Rose was trying to protect: someone with real scars and feelings just like the Crystal Gems…and also someone with no compassion for the person marked “enemy.” Steven is left to struggle again with the question of how much he is or isn’t his mother, and the sickness that strikes him after throwing Eyeball out into space seems born of worry that maybe he’s capable of shattering someone too.

The episode, and the season, end with the first in-show appearance of the ending theme “Love Like You.” It’s laid beautifully over the bright, comforting lights of the ship, all designed to be in stark contrast to the void of space – you’ll notice that little to no music was used up to this point, further highlighting the dearth of communication between Steven and Eyeball and Steven’s difficulty in understanding Rose’s actions. That final scene is a comfort as far as it brings Steven back to his family, but there’s a melancholy to it that can’t be shaken. Hard truths that are inevitably going to come up down the line. And bravo to Zach Callison, who rose admirably to the challenge of playing these new, very internal beats of Steven’s character arc. This whole cast is really a treasure.

And that’s the end of season 3. It’s a bit awkward, since we’re starting season 4 straightaway, but that doesn’t stop the wrap moment from feeling quite lovely (as opposed to the end of season 2, which just sort of stopped; there’s definitely the feeling that this was the planned ending of the double-long season 2 before things were broken up). The show doubled its main cast and started running headlong into hard questions, more often successfully than not. Steven’s coming of age has often been a little left of center stage, and it’s going to be even harder balancing those breather episodes now that the “real” plot has gone so boldly into these dark directions, but the potential for what might come next is thrilling.

Next time we come back to Earth, and Peridot, with “Kindergarten Kid.” See you there!

Vrai is a queer author and pop culture blogger; they can’t believe they’ve been watching this for three whole years already. You can read more essays and find out about their fiction at Fashionable Tinfoil Accessories, support their work via Patreon or PayPal, or remind them of the existence of Tweets.