Here's to 100 episodes of feelings! 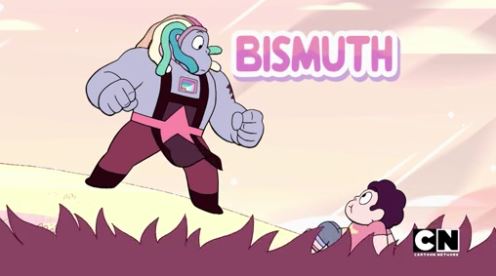 The Recap: Steven finds a bubbled Gem in Lion’s mane. She turns out to be Bismuth, the former smith for the Crystal Gems during the Rebellion. While the others were told she “disappeared,” Steven finds out the truth when Bismuth tries to show him her plan to fight Homeworld–Bismuth was bubbled when she and Rose disagreed over whether it was right to shatter enemy Gems.

Here we are. The big 22 minutes. The hundredth episode (in terms of the show’s production order). The introduction of a new Gem that we all knew, deep down, couldn’t possibly be sticking around. The episode knows it too, no matter how much it tries to distract us with those cute eyecatches. There’s too much wistful sadness, mourning a pre-destined conclusion even as both Amethyst and Steven are won over by their new teammate. Uzo Aduba’s performance is so rich, warm, and ultimately raw that it might leave us a debilitated puddle of tears if we heard it on a regular basis.

But seriously, this is a big ol’ experiment of some high peaks and low valleys. And I think we’d better go ahead and talk about the latter.

Somewhere out there a discussion is happening around Bismuth’s role in the show as a militant character and how to parse that alongside the fact that she’s both butch and played by an African American actor. It is by no means my place to comment on that conversation or its validity–I’ve done my share of handwringing about how nice it would be to have an unambiguously heroic butch character, after all (stiiiiiiiiiiill hoping); and representation is so inexorably tied to past portrayals and histories of stereotypes that it’s always more helpful to talk through things than pretend everything is hunky dory now that we’re in the 21st century–but I can’t and shouldn’t be a part of it. Your recapper causes snow blindness when they go outside, y’see.

I wanted to at least give a nod to it, though, before I carry on looking at Bismuth’s character in a purely narrative sense. On the one hand, this might be the most glaring instance of the show introducing and then shelving a concept where it kind of doesn’t work, given at once too much and not enough time in that 22 minutes.

The actual final conflict between Bismuth and Steven is a thing of beauty and nuance, with each character given the right to be, well…right. While we’ve known for a long time that Rose was a secretive and sometimes shady leader, Bismuth is the first character on the show to call a spade a spade. She’s right, and Steven knows that she is–it’s why he pledges honesty when everything is over. And she’s right that Rose’s methodology ultimately led to them losing the war, and maybe her weapon could’ve turned the tide for them.

The question, then, is what counts as a victory. Is it right to shatter Gems fighting for Homeworld, when the Crystal Gems were no different before Rose showed them a new path? Would a victory of attrition be worth the cost of sinking to the level of Homeworld, who not only shattered Gems but then used them as a weapon in death? How many deaths are acceptable in the pursuit of an ideal? Is victory merely saving Earth? Stopping the corruption? Could one weapon truly have stopped the Diamonds any more than trying to reason with them?

Stories about war have grappled with these questions for a very long time, and the dialogue walks a fine, heartbreaking line of escalation as Steven tries to take Bismuth’s earlier advice: to be his own person and hold to his principles while still, in the end, finding himself echoing her. The show has always done its best to acknowledge that violence is sometimes necessary while still arguing for diplomacy and peace. This episode was an inevitability in some form, as a means of Steven finally having to draw a line in what he believes that isn’t a categorical win–a choice that I guarantee is going to have consequences down the line, not least in the fact that he’ll feel more pressured to stand by those beliefs because of what he had to sacrifice defending them.

Where it falls down a little bit is in the briefness of Bismuth’s presence on the show. Steven is always learning from the characters around him, but they in turn have their own lives and arcs in the series. While I don’t doubt that we’ll be seeing Bismuth in the future (her re-bubbling here feels very pragmatic, a need to present a united front while Jasper is still an active threat), her appearance here begins and ends with how she relates to Steven. While she has a history with Garnet and Pearl, she comes into the world of the show to represent this alternate viewpoint for our protagonist to measure himself against, and then goes away again.

It’s all the more disappointing because that one scene is so good at approaching those ethical differences with sensitivity in the moment, only to shut them down again as soon as Steven’s made his decision. They opened a big old can of worms that would have, should have, had a major impact on the show and every character, and then they bottled it up again. And it winds up making the argument feel extremely weighted in Steven’s favor rather than showing the decision of the character, and I really don’t think that’s what the Crewniverse was going for. There’s far too much empathy for Bismuth before she’s poofed.

But until we see her again, her arc amounts to a plot device, and that’s not fair either to the viewpoint she represents or the rich character that the crew obviously poured their heart into. And the thing is, I don’t doubt that the Crewniverse knows that. It takes some of the sting out of watching it end this way, but I have a fair amount of faith that Bismuth won’t be reduced to an object lesson for Steven. Until then…I got nothin’. Just tears.

The final word on scheduling seems to be that this is the last episode this week, and then we’ll have two episodes back to back on Monday. Take care of yourselves out there, and I’ll see you then.

Vrai is a queer author and pop culture blogger; they’re gonna need those extra days to decompress after this. You can read more essays and find out about their fiction at Fashionable Tinfoil Accessories, support their work via Patreon or PayPal, or remind them of the existence of Tweets.