Steven Universe Recap: “Back to the Moon”

Alright, who's got headcanon bingo? 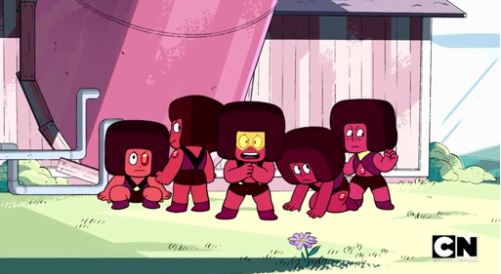 The Recap: The Rubies are back from Neptune and still looking for Jasper. Amethyst is able to fool them with her shapeshifting, but the ruse falls apart when they’re taken to the moon to attempt to issue a report to Yellow Diamond. In the ensuing scuffle Steven is sucked out into space. Which should give him plenty of time to contemplate the news that Rose Quartz shattered Pink Diamond as part of the Rebellion.

It’s a shame this couldn’t also have been packaged with tomorrow’s season finale, “Bubbled”–as is it feels like we’ve got a bit of a loose end on our hands, taking care of the fallout from “Earthlings” and setting up for the finale but feeling strangely fragmented itself. While it’s good to see the Ruby squad again, the long stretch spent popping them one by one feels like retreaded ground. It’s the closest to feeling like an attempt to fill time that the series has ever gotten, and it’s downright bizarre with the running time and the traditional density of Gem-centric episodes.

Things snap into place once Amethyst starts her Jasper impersonation, providing the tension for the bulk of the episode as the Rubies all fawn over the apparently legendary hero of Homeworld and happily dispense tidbits of backstory for the Crystal Gems and us. We even get a bit more personality for the Rubies (whose credits names are finally explained), particularly Rebellion veteran Eyeball and her sad, single tear at being passed over. Jasper is a really big deal, y’all (which makes her an even more valuable asset for the Crystal Gems, particularly if most ground troops are as impressionable as the Rubies). Not to mention some really fantastic histrionics from Pearl and a solid dose of well-deployed deadpan Garnet that I didn’t know I’d missed (it might be the best instance since the “the children are playing with swords” bit).

The moon base remains as haunting a setting as ever, and we finally get a chance to look over those conspicuously avoided murals from before–one of the few intact images of Pink Diamond, it seems. Which makes sense, of course, since the remaining Diamonds wouldn’t want any Era 2 Gems to get the idea that a Diamond was ever shattered. Gotta keep that propaganda strong.

One of the most admirable things about SU as a whole is that the plot is kind of a secondary thing. Sure, it’s cool to be able to piece together the lore and the tiny context clues (I’m STILL mad at myself for not picking up the My Diamond/Yellow Diamond discrepancy), but the actual facts are secondary to how the characters feel about them. The fact that Rose supposedly shattered Pink Diamond–which might be a misrepresented fact (let’s not rule out Lion), or there might be some mitigating circumstance (was Pearl’s reaction because she didn’t know Rose had done it, or because Rose did it to help or protect her?)–isn’t as important in and of itself as how it affects the actions and emotions of the other characters.

If Rose did it, for example, was her regret or horror at the fallout of her actions so great that she wanted to stop Bismuth, fearing the creation of other lost or vengeful Gems like Jasper (which of course she didn’t actually discuss, because Rose is allergic to open communication)? Does this change Steven’s willingness to listen to Bismuth or Jasper, or affirm his dedication to being different than his mother–thinking that he can go through a war not having to make such an ugly choice?

The ramifications of this fact aren’t really addressed here, which is part of what makes it feel like a free-floating second act in spite of it ostensibly being the third part of a “Beta-Earthlings-Back to the Moon” trilogy. Steven will have plenty of time to think about his relationship to Rose while he’s floating out in space, what that means and what obligations it gives him. And while Steven has been on edge about his mother’s legacy all season, this might be the thing that finally tarnishes it completely.

All of this seems to be pointing toward the space opera element of the show seriously ramping up, and I can’t say I have much complaint with that. While the Beach City components are important, the show’s built a really compelling portrait of Gem life and society, and now seems like a good time to get a glimpse at how the other side lives. If this is truly going to be a story about how there are no winners and no easy answers in a war, then we need to get away from Steven’s perspective, even if just in little bits, and get a chance to see the bigger picture.

For now, it seems like we’ll be getting another quiet denouement in the vein of “Log Date 7 15 2,” but without the giant hiatus. Which might be for the best, since Thursday season 4 sounds like it’s going to hit the ground running (there are quite a few leaks out for the final episode of the nuke; wouldn’t be a Steven Bomb without one, I suppose). See you there!

Vrai is a queer author and pop culture blogger; they apologize for being a little low on steam for this one. You can read more essays and find out about their fiction at Fashionable Tinfoil Accessories, support their work via Patreon or PayPal, or remind them of the existence of Tweets.