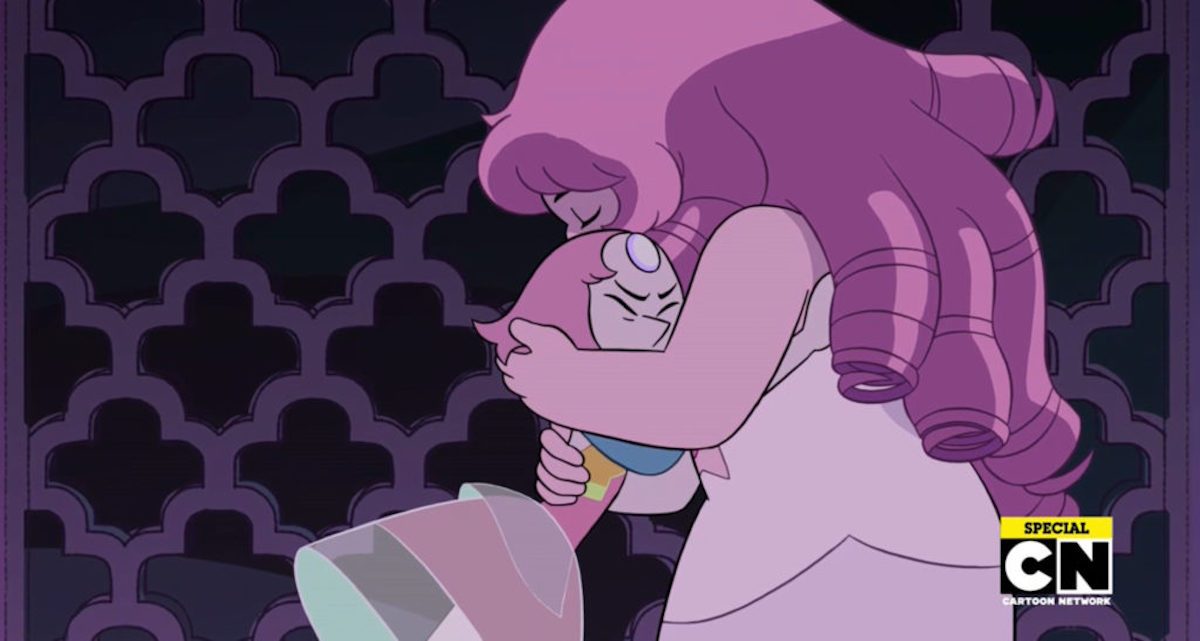 Steven Universe episodes “A Single Pale Rose” and “Now We’re Only Falling Apart” answered arguably the biggest questions on fans’ minds: who was Rose Quartz, really, and why did she start the rebellion? I don’t mean to be that fan, but I never gave up believing that Rose Quartz had been Pink Diamond all along. Once I read a post about it on Tumblr, long before Steven’s encounter with any Homeworld gems, it made too much sense to ignore. So, when “A Single Pale Rose” finally confirmed that theory, I was more interested in everything else it said about the characters, especially Pearl.

There’s a reason that Pearl was our point of view character for this episode, and not just because she’s the only surviving gem who knew what really happened. If all we needed to know was “Rose Quartz was Pink Diamond,” we could have had a simpler, more straightforward flashback episode like “Now We’re Only Falling Apart.” Instead, we got a trip through Pearl’s mind, and suddenly everything about Pearl made sense.

More than the others, Pearl has always been trapped in the past. She clings to her importance as a founding Crystal Gem and Rose Quartz’s most loyal follower, even though it holds her back from progressing in the present. When Steven is an infant, Pearl literally can’t see him as a person until she almost hurts him. She has trouble coping with Steven’s growth into his powers. She still resents Greg, and the idea that Rose kept secrets from her nearly destroys her in “Rose’s Scabbard.”

Yes, Pearl loved Rose deeply, and Steven’s presence is a constant reminder that Rose didn’t love her in quite the same way. (Never mind what happened in “Now We’re Only Falling Apart,” because their iffy relationship dynamics are another essay.) But even Pearl recognizes that something about herself is skewed. She knows she can’t relax and let things change like Garnet or Amethyst or even Peridot, and it distresses her. Look at the song she sings in “Mr. Greg.” She literally asks, “Why can’t I move on?”

And Pearl’s resistance to change holds the Crystal Gems back. Even after over three millennia, Pearl still thinks of herself as little more than a meat shield. She constantly doubts her own self-worth, and her need to justify her actions and her place on the team creates friction with her fellow gems. She lies to Garnet so they can fuse and almost destroys their friendship. She constantly belittles Amethyst and refers to the Kindergarten with disgust, making Amethyst act out. After we discovered that Pearls were never meant to be anything but pretty accessories without minds of their own, things started to make more sense, but only to a point. Why did Pearl believe she really knew what Rose was thinking? Why couldn’t she talk about her feelings openly and honestly, even though she clearly wanted to?

“A Single Pale Rose” finally gives us a real glimpse into Pearl’s head, behind the perfect, overcompensating façade, and that glimpse is horrific. Pearl is literally trapped in her own most traumatic memories, from the moment she realized Rose would leave her to the horror of the Gem War—and it all started when Pink Diamond commanded Pearl not to speak.

Therefore, Pearl, unlike the other Crystal Gems, could never truly embrace the new status quo. She can’t tell Steven the truth about who his mother was, so she can never truly accept that Steven is here and Rose is gone. She’s had to lie to the other Crystal Gems from the moment she met them, so it’s not surprising that she fails to think about their feelings or consider their wants and needs before she acts. Part of Pearl is literally reliving every awful thing that happened to her, and she cannot confide in anyone.

But things are improving for Pearl. The newest episodes show a Pearl who still has many regrets, but maybe not one reliving every awful moment that ever happened to her. By breaking the last order her diamond gave her, Pearl has finally started to join the present.

M.A. Hinkle is a shy and reclusive figure, only lured to the internet by Stevenbombs and The Discourse (TM). Her first book, Death of a Bachelor, will be published by Ninestar Press in October 2018.