Steven Universe Is the Perfect Cartoon for Adults

Television wasn’t a big part of my life growing up, since my parents refused to shell out for cable on principle. Now that I’m an adult, I feel like I’m making up for lost time in watching what is ostensibly kids’ programming. Like millions of others, my current TV-Y7 obsession is Steven Universe.

Created by Adventure Time’s Rebecca Sugar, Steven Universe tells the story of a magical young boy whose adventures with three ageless, shape-shifting space rocks will decide the fate of the planet. It’s got all the absurdity I crave to take my mind off my own problems, but it’s also grounded enough to be intensely emotional, and the lessons it imparts can legitimately impact people’s lives for the better.

When I say “people,” I mean both kids and adults. For years, the common barometer of quality in an animated TV show or movie has been if grown folks can reliably find snippets of enjoyment here and there. With Steven Universe, though, nobody needs to go searching for things to enjoy; it’s sufficiently sophisticated to entertain adults and simple enough to hold a child’s attention. I had my suspicions from the outset, but watching a few of the best episodes with my mother really drove home how well Steven Universe appeals to folks of literally all ages. Here are five ways Sugar’s gay sci-fi masterpiece has achieved what some thought was impossible: a show kids and their parents can enjoy together in harmony.

[Spoilers for Steven Universe ahead.]

The show’s basic premise applies “magical girl” tropes to a boy, but the variety and nuance in its vast female cast enable Steven Universe to avoid the troublesome “male as default” issues that have plagued many other cartoons. This was among my mother’s first observations when we watched a few episodes together. “I like the big tall purple one,” she told me, referring to Garnet—a large, powerful, and nonwhite-coded member of the core team. 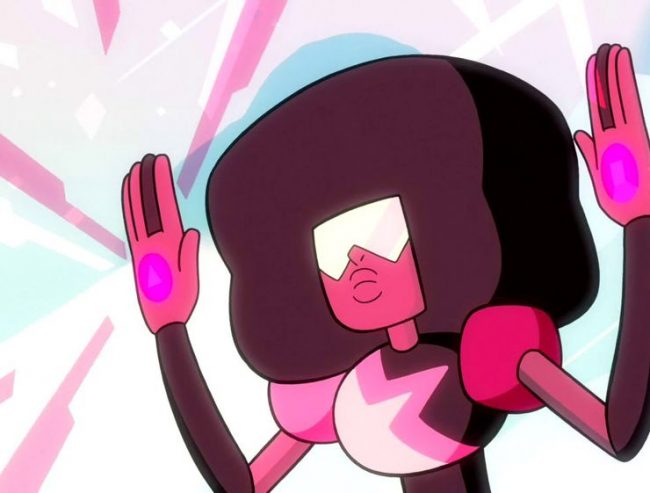 Garnet has become a cultural touchstone for women of color, queer women, and women with body types that are bigger than is considered classically beautiful. That a white, straight, small woman like my mother, someone who shares none of those lived experiences, would instinctively pick out someone like Garnet as her favorite character speaks volumes about the unifying power of Steven Universe’s intersectional feminism—and that’s something adults and kids can benefit from in their own ways.

RELATED: How Gay Is Your Geek TV?

The difference between being “cute” and “cutesy” is another important one for adults, and one that my mom has also highlighted when we’ve talked about her enjoyment of the show. Although aesthetics like those in My Little Pony may appeal to some younger viewers, that level of aggressively glittery adorableness can be a real turn-off for more mature ones.

Steven Universe has none of those problems. Sure, Steven’s eyes sometimes turn into giant orbs with stars in their pupils when he’s enchanted, and all the characters are cute in their own way—whenever Pearl has a super-gay crush on a human or another Gem, her cheeks blush an adorable blue. But the overall designs are realistic to such a degree that the show never feels artificially sentimental. And speaking of which…

Last night, seeking some escape from the horrors of politics, I popped on the episode “Cry for Help.” While searching for an enemy, Pearl and Garnet fuse (i.e merge their bodies, a technique that the show uses to metaphorically explore friendships, romance, and sex) to take out a communication hub that’s being used for nefarious purposes. Later, Pearl secretly rebuilds the hub, so she’ll have an excuse to fuse again. The result is an episode which deals with issues that adults still have trouble parsing—consent, trust, forgiveness—in a way that still makes sense to the children who remain Steven Universe’s primary audience.

The next episode, “Keystone Motel,” sees Ruby and Sapphire navigate a lovers’ quarrel that spirals out of Pearl’s mistake and the duo’s reaction (or lack thereof) to that breach of trust. The following, “Onion Friend,” sees Amethyst rekindle her lapsed friendship with Vidalia out of depression at the rift between Pearl and Garnet, as each confesses their longstanding admiration and love for the other. In Steven Universe, we see role models for kids and adults alike—characters who are not merely pillars of virtue, but flawed beings who mess up, work to fix their mistakes, and lean on each other in times of trouble.

RELATED: 5 Times Sailor Moon Taught Me the Difference Between Empowerment and Strength

Steven Universe is one of those worlds where characters break out into song at the drop of a beat. Steven himself is one of the main perpetrators, singing a ditty to encourage Pearl and Amethyst to fuse into a “Giant Woman,” but plenty of others get in on the action, too: Garnet lays down a great rap while telling the vicious Jasper she’s “Stronger than You” in one of my favorite action sequences ever to air on Cartoon Network.

But it’s the way that the show’s music heightens its drama and messages that make it so valuable. Pearl’s song “It’s Over, Isn’t It” in the episode “Mr. Universe” is a haunting melody that evokes tearful, universal (pun unintended) memories of lost love. Garnet and Stevonnie harmonize in a beautiful duet about anxiety, depression, and brain fog called “Here Comes a Thought”; and I defy anyone to listen to the lyrics of the show’s closing theme, “Love Like You,” without weeping openly. Steven Universe’s music isn’t a kiddy gimmick—it’s a powerful tool for adult-friendly storytelling.

It normalizes queer relationships in a way we desperately need. 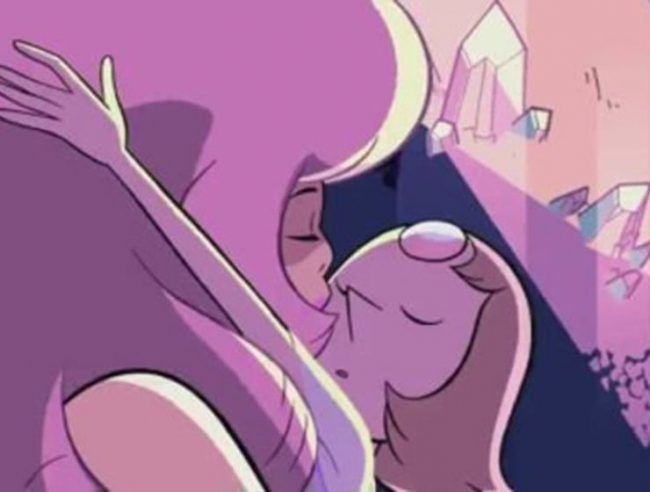 Marriage equality, transgender civil rights, and the general queer liberation umbrella have polarized many families and institutions over the past several decades. Steven Universesends a message of unity in a way that’s neither assimilatory (characters don’t need to be “just like normal people” in order to deserve respect or love) nor aggressively confrontational. Queer-coded characters exist alongside cisgender and heterosexual ones as a matter of course, and nobody makes a big deal out of it. It’s in keeping with the rest of the show’s themes of love, pain, and progressing forward that its queer content should seek so clearly to heal wounds that many thought would never heal.

Though I didn’t have wounds of my own at the time, it was incredibly meaningful to watch Steven Universe for the first time with my mother a couple years ago. I was deeply closeted then, but seeing Mom’s enthusiastic reaction to such intrinsically queer media assured me that I really could tell her anything. Now, the show is an experience we can share—cis mom to trans daughter. Maybe cartoons won’t be what makes our society whole, but for my money, Steven Universe is a good start.

RELATED: 6 Great Mecha Anime That Question Our Connection to Tech

Sam Riedel is a freelance writer and editor living in Massachusetts. A former editor at The Mary Sue, her work has also appeared on Vice, The Establishment, and McSweeney’s Internet Tendency, among others. Sam subsists on a balanced diet of estrogen, Pokémon, and comic books. Prolonged contact may cause irritation. Follow her on Twitter @SamusMcQueen.