It’s OK to Have Flaws Except You: Steven Universe and Fandom | The Mary Sue

It’s OK to Have Flaws (Except for You): Steven Universe and Fandom 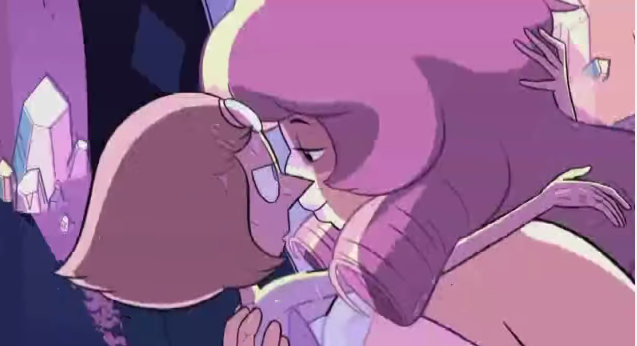 Steven Universe’s occasional homages to Revolutionary Girl Utena are starting to feel less like cute nods to a beloved nerd thing and more like an earned, legitimate comparison: both shows feature a patchwork of complicated interpersonal relationships and great care for their very well written characters, deal with complex and emotionally charged thematic issues through heavy use of abstraction and symbolism (never forget Utena aired in a primetime slot), and are unafraid of letting their characters seem unsympathetic in the name of developing them.

If you’ve any involvement with the internet-side reactions to the show, you might guess that it’s the last one I’m most interested in talking about today. The latest run of episodes unloaded some very heavy information about the cast, some of it troubling and all of it believable. And doing so has made it clear that SU isn’t just blazing a trail on television but within the context of fandom too, namely in the portrayal of canonical queerness and female-coded characters.

It became inarguably clear (not that I haven’t seen people arguing it, mind) during the last run of new episode that Pearl was and is deeply in love with Steven’s mother, Rose Quartz. They have also made it clear that Pearl has very deep seated issues with self-worth that present as fierce possessiveness when threatened, and unresolved grief so severe that she falls completely prey to powerful, impulsive emotions around the mere subject of Rose. The show (that is, the tone and perspective) has taken great care not to condone Pearl’s negative behaviors while continuing to sympathize with her, and Pearl herself has worked to correct her issues in the present even as she remains very mentally and emotionally vulnerable. She’s heads and shoulders, at present, the most faceted and fascinating character of a very strong ensemble cast. 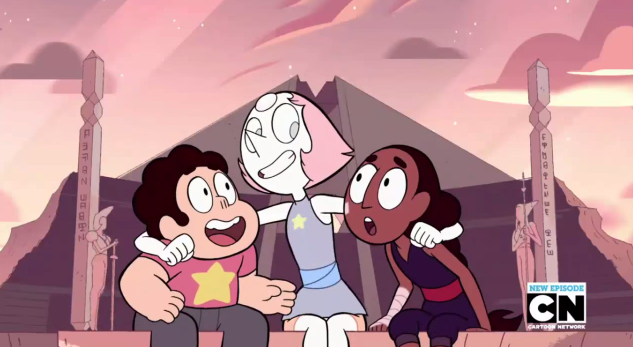 Look at that monster, realizing she’s been wrong and resolving to be a better mentor.

The internet’s reaction to this recent showing of character flaws has been…rather less embracing than my own, shall we say. For a show as firmly intent on finding the goodness and redemptive possibility in everyone, as embodied by its titular character, there is an awfully strong all-or-nothing perspective going on in the fandom. A character is beloved when introduced until they show some kind of failing or hurt the feelings of an already beloved character, at which point they’re completely discarded—this extends not only to very morally grey cases like Peridot (who is complicit in some pretty terrible things, though she might yet be redeemed) to Pearl’s recent outbursts (the critiques of which can certainly have validity but tend to ignore Pearl’s increasingly clear trauma and mental illness), or even Rose’s initial patronizing attitude toward humanity (which the show has already shown she learned from and grew out of). It’s a troubling trend, one that has roots in call-out culture and the “race to least problematic” ideation that I’m going to leave aside here for the sake of sheer scope.

Instead, I want to pick at two issues going on in this recent mess. It’s easy to pick on the “this wouldn’t be happening if these characters were coded as male,” but it’s nonetheless true—as a fan of the unrepentantly (gloriously) awful Bill Cipher, among others, I can promise you I see it regularly.

Internalized misogyny is a hell of a thing, and even when a show has put forth the hard work of showing a varied, predominantly female cast there’s still work to be done in breaking down the expectation that the female character is the weak, token, unwanted one. The one you have to include (often for no homo purposes) but aren’t really invested in, and all the character traits that become associated with that role. By the same token, women who are allowed more depth and development are more likely to be placed on a pedestal, disallowed from those “weak” traits that are, in the context of strong, well developed writing, merely human. Traits like thoughtlessness, jealousy, or cowardice. 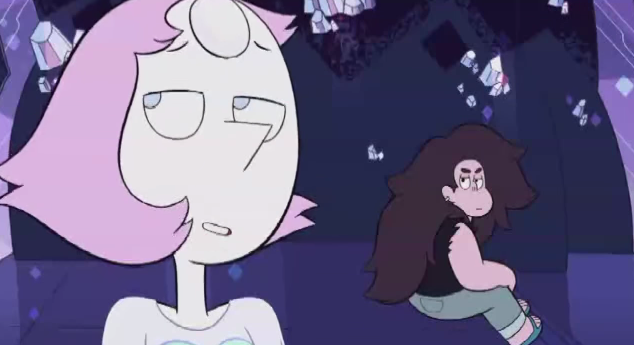 The second, thornier issue regards Pearl as a potential example of the “psycho lesbian” trope: a queer coded-female who becomes violently jealous when the object of her affection turns out to be “normal” and falls for a man. It was an extremely pervasive trope that often cast queer women as inherently mentally broken or (at worst) predators of would-be heterosexuals—in its most extreme forms it’s not far from a gender-specific version of the “let’s equate gays and pedophiles” fallacy. And while there might yet be a conversation to be had on this one (it’s too soon to tell yet, given the conspicuous lack of direct, on-screen discussion between Rose and Pearl about their relationship), I think SU has done the hard work of depicting jealousy without falling into this trap.

There’s a popular post on Mad Max Fury Road that talks about how having a visible female presence in the film allows it to have death regardless of gender rather than The One Lady who must survive to film’s end, to have one character named “Cheedo the Fragile,” to have women of different ages and body types and abilities, and so on. Basically, it opens the door of storytelling possibilities, and devices that read as toxic stereotypes when grafted onto the singular representative of a group are capable of showing a great deal more nuance when explored in a story that allows multiple portrayals of a group or culture.

There’s no doubt that SU is far and away the most progressive piece of children/family media in regards to portrayals of queer individuals and relationships(they’re not totally free, mind—Pearl and Rose’s kiss during their fusion is hidden behind a very convenient lock of hair). Ruby and Sapphire were a revelation, equal partners in a trusting, loving relationship whose bond enables them to form one of the strongest and most compassionate members of the cast.

The normalization of, let alone the admiration for (which both Connie and Steven clearly possess) the living relationship that is Garnet opens countless doors to the show’s writers (as well as wonderful little touches like non-binary Stevonnie). That one small but crucial step eases back on the ever-existing weight in a queer viewer’s mind: are these characters together (or not together) because this is what’s allowed to be shown? Could that character be like me, but they weren’t able to get it on TV? 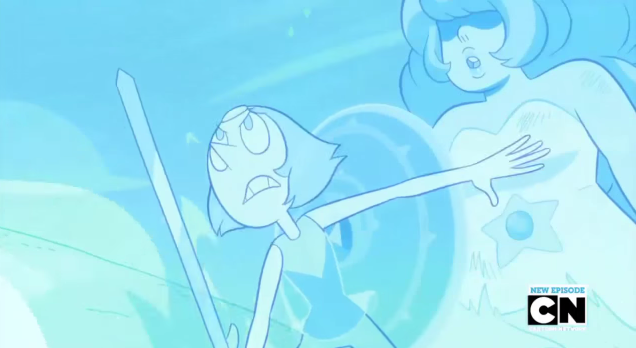 The establishing of Garnet seems deliberately placed as Pearl and Rose’s history has begun to unfold. Without the pressure of being The Obviously Queer One, Pearl can simply be jealous because those are emotions that arise from her as someone who is insecure and fearful about losing the most important individual in her life. Pearl can be flawed without being beholden to her romantic desires, and the latter can be a part of her character (a hugely motivating part, even) without being the whole of it. Depending upon how this arc resolves itself, there’s even the potential to open further doors.

And that bit of freedom, that attentive writing, even ripples out to tropes used in straight media—Rose might not, depending on the resolution of that arc, be involved in a love triangle at all but trying to form a poly relationship (though if that is the case she was initially very poor at communicating that intent to her partners). Steven and Connie’s relationship can be allowed to be a sweet, loving bond without the pressure of an automatically assumed heterosexual dating bond placed on it (even if they clearly love each other in some fashion, and would in fact be adorable life partners). Breaking down a convention has a ripple effect, and guided by talented hands it’s leading to some truly wondrous results.

Now, it would be nice if internet discourse would do its part in trying to evolve with these new strides in writing. But one day at a time, I suppose.

Vrai is a queer author and pop culture blogger; they seem to find themselves the inadvertent patron saint of problematic faves as of late. You can read more essays and find out about their fiction at Fashionable Tinfoil Accessories, support their work via Patreon or PayPal, or remind them of the existence of Tweets.