Steven Spielberg’s West Side Story Is Getting Mostly Rave Reactions, Except For Ansel Elgort 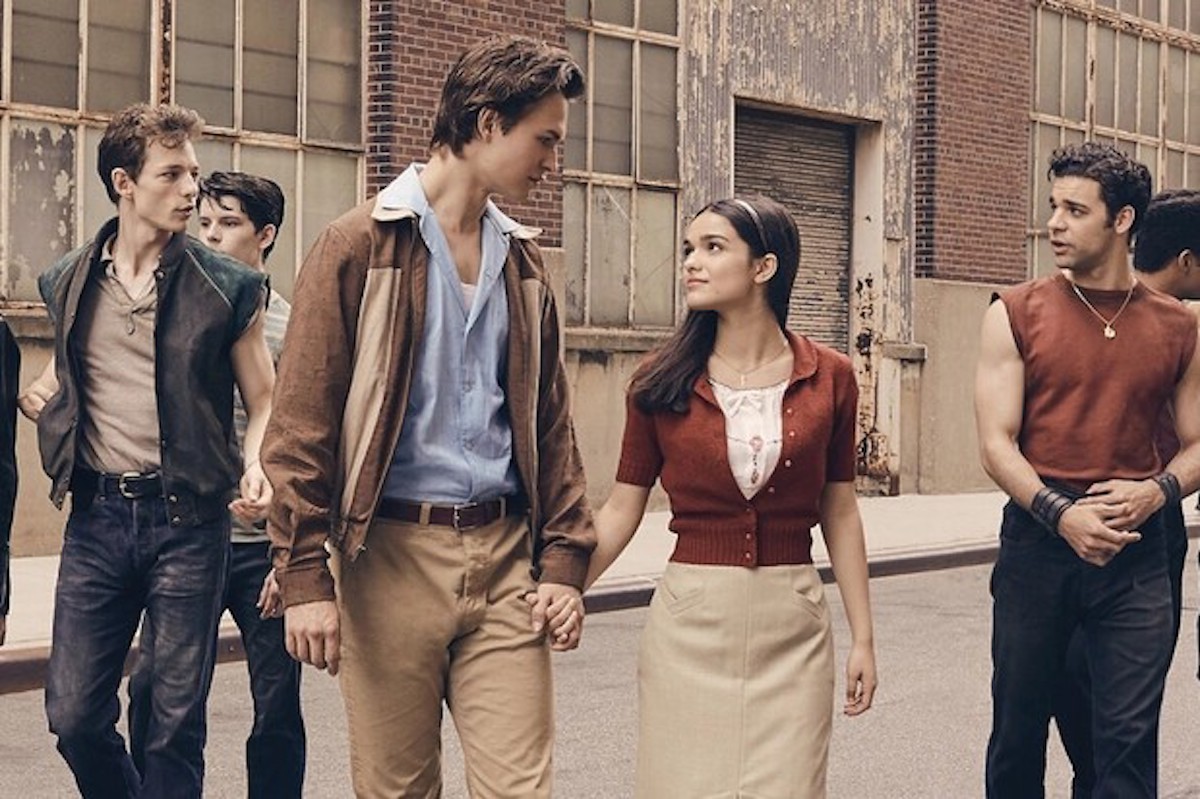 Director Steven Spielberg’s West Side Story was screened for critics, and the film is generating primarily positive buzz. While formal reviews will go up at a later date, social media reactions started to emerge moments after audiences exited. Those reactions are wildly enthusiastic about many elements, with one exception—the film’s male lead, Ansel Elgort, who plays Tony. Let’s take a look at what people are saying.

I was in attendance at the packed New York City screening of West Side Story, and I enjoyed it very much. I went in without many expectations: Spielberg may be a legend, but that doesn’t mean I’ve loved all of his movies, and West Side Story bears a huge cultural weight, both for good and ill. But Spielberg’s remake is broad in its scope and vibrantly shot; as a native New Yorker, I especially appreciated seeing swathes of the city depicted in the mid-1950s.

The performances are top-notch almost across the board. The standout for me is David Alvarez’s electric Bernardo, teamed well with Ariana DeBose’s strong Anita. I also appreciated Mike Faist’s compelling Riff and newcomer Rachel Zegler as a very fresh-faced Maria with a soaring voice.

In fact, the whole of the cast members—the supporting cast and dancers do a lot here—are fantastic. The one sour note is Ansel Elgort’s glum Tony. Elgort seems miscast, sings flatly, and shares little chemistry with anyone onscreen. He’s a strange choice for a leading man from one of the world’s most famous and lauded directors. What does Ansel Elgort have on Steven Spielberg? And after the accusations that emerged about Elgort last year, does he have any place at all being involved with the movie’s promotion?

My feelings on Elgort in the film echoed this reaction to a T:

Ansel Elgort as Tony just brings it all down. He’s got the charisma of an expired clam and seems incapable to expressing an emotion onscreen that’s not smirking. Surrounded by so much shining talent, he really flops.

There you have it: Ansel Elgort, with the charisma of an expired clam. Luckily for West Side Story, however, the rest of the able cast stays on their toes. Here are those raves before we return to the problem of Elgort.

I saw Spielberg’s West Side Story last night and since I won’t be reviewing it I can say this: It is GREAT. It is really, really great. #WestSideStory pic.twitter.com/idvr3saMD5

Obsessed with Anita and Riff from Spielberg’s #WestSideStory, but shout-out to Rachel Zegler’s fabulous debut as well. The story is dated and there’s no way around it, but the script did its best to keep things fresh while still maintaining the Old Hollywood Musical vibe. pic.twitter.com/M0R9NwI71O

Steven Spielberg’s #WestSideStory is a TRIUMPH! It’s beautiful & brilliantly photographed – a real love letter to NYC w/ a tremendous ensemble cast who truly redefine this classic story for a new generation. Shout outs to @rachelzegler & @ArianaDeBose who CRUSH it in this film. pic.twitter.com/9wJbUJclnV

#WestSideStory is INCREDIBLE. Spielberg delivers an award-worthy visual spectacle that expands on the original as a timely technical MASTERPIECE. Every department fires on all cylinders, & Rachel Zegler steals the show with THE star-making debut performance of the year. LOVED IT! pic.twitter.com/Qrzx5LiPBK

Just saw #WestSideStory – I was VERY skeptical of this movie. How could anyone, even Spielberg, approach the original’s greatness? I was wrong – it’s an often breathtaking staging of an all-time classic, respecting the original but also reinventing it. One of 2021’s best films. pic.twitter.com/7R0YWeePyt

my #WestSideStory review is simply: I can’t wait to see Rachel Zegler and Ariana DeBose’s careers explode after this. They knock it out of the park as Maria and Anita in this beautiful crafted movie pic.twitter.com/FZtlG8vABS

Do you notice how none of these thrilled raves mention Ansel Elgort, the ostensible star/male lead of the movie around which the “greatest love story of all time” is intended to revolve? That’s because he’s the worst part of this film and some people are politely trying to tiptoe past that fact.

Many, however, are not!

WEST SIDE STORY is extremely good, and Ansel Elgort is just terrible in it! Quite the conundrum!!

I really loved #WestSideStory, which feels very classical and overflows with style. Two and a half hours flies by. Ariana DeBose is a ferocious highlight and Rachel Zegler makes a confident debut. Ansel Elgort, though, feels miscast and often looks downright lost.

All of this being said, do NOT gloss over what Ansel Elgort did. He should never work again. https://t.co/FvS2Jgn8oM

As a reminder, Elgort was accused of sexual assault in 2020, by someone who would have been 17 years old at the time of the alleged assault. Then in response, while denying the assault claims, Elgort asserted that he’d had a “consensual” relationship with said 17-year-old, when he was 20. It’s uncomfortable to watch him, now age 27, across from Zegler, an actual teenager when the movie was shooting.

Beyond the awful accusations—which emerged after West Side Story had wrapped shooting—Elgort is a strange casting choice, as he does not offer any compelling singing or acting here. He is, as another Twitter reaction puts it, “a black hole at the center of West Side Story.” As an actor best known for The Fault in Our Stars and Baby Driver, Elgort doesn’t bring much star power, either—it’s a perpetual joke that he’s easily confused with other actors who resemble him and have unconventional names like Alden Ehrenreich. Again, what does he have on Steven Spielberg?

Those accusations are also coloring much of the public reaction to West Side Story online—as well they should. While initially it had seemed the studio policy to try and avoid Elgort in promotions as much as possible, he’s now showing up alongside the cast for premieres and interviews.

west side story promotional run has been uniquely evil. first it was “do not mention ansel elgort show as little of him as possible in the trailer ERASE ANSEL ELGORT” but now it’s “yes he’s a beloved cast member and the rest of the cast adores him!” everyone can choke

Hollywood is so fucking hypocritical. They do their little events where they claim to support SA survivors, do the whole ‘Me Too’ thing, sell the stories of survivors AND THEN GIVE FUCKING PLATFORM TO KNOWN ABUSERS.

I wasn’t aware that Ansel Elgort had assault allegations against him, but even without that, he is the least charismatic actor I’ve ever seen. It’s like he was produced by an algorithm (and of course, he has famous parents).

Sorry to report that Ansel Elgort shakes his chin to have vibrato during “Tonight” and I fully said “NO” out loud.

Please just reshoot the movie with anyone else other than Ansel Elgort. CGI in Paul Giamatti for all I care. https://t.co/atObkz9eBJ

Sort of enjoying how every #WestSideStory reaction is like:
✅ This movie is AMAZING!
✅ Ariana DeBose is AWARD-WORTHY!
✅ Rachel Zegler is a SUPERSTAR!
✅ Ansel Elgort is PRESENT!

Ansel Elgort? More like Ansel Inert. Dude stands there like a mannequin body of Newsie’s era Christian Bale with the unmoving face of Back to the Future era Billy Zane. What a black hole at the center of #WestSideStory

For the rest of the cast and crew that clearly worked enormously hard on this film—which shines as a labor of love to its musical and cinematic history—West Side Story is emerging as a triumph. Their stunning performances and production should not be canceled out by one man’s inert clam-ness and alleged terribleness. Yet it’s a difficult and enormous elephant in the room to avoid. It’s a damned shame that it’s too late to replace Elgort with Christopher Plummer.

Me acting all excited about #WestSideStory after these rave reactions despite whining about why we didn’t need a remake for over a year pic.twitter.com/dCW5BBbqqZ