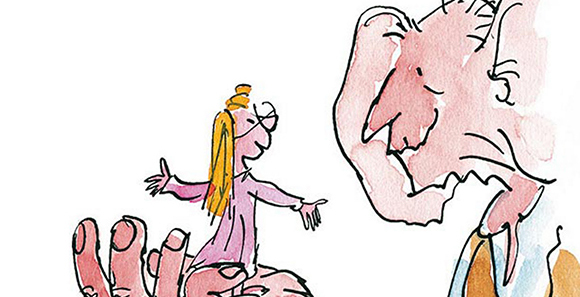 Kid’s books with movie versions currently in development: The BFG. Alexander and the Terrible, Horrible, No Good, Very Bad Day. The Giver. R.L. Stine‘s Goosebumps series. Scary Stories to Tell in the Dark. Paddington. And many, many more. And yet still no movie for Pish, Posh, Said Hieronymus Bosch, about the man who painted this. (Yes, it’s a real book.) I don’t understand you, Hollywood.

Steven Spielberg and DreamWorks are joining forces for a live-action version of Roald Dahl’s The BFG, about a Big Friendly Giant who befriends a young girl and teaches her about the benefits of farting. The screenplay’s being written by Melissa Mathison, who also wrote E.T., and that’s making it really hard for me not to get my hopes up now. After all, The BFG was one of my favorite books growing up, and if the movie is bad I might cry.

Then again, maybe I should get my hopes up. Roald Dahl is somewhat unique in the movie adaptation sphere in that there have been a good number of movies based on his books, and the majority of them have been pretty damn excellent. James and the Giant Peach. Matilda. The Witches. Fantastic Mr. Fox. And, at the pinnacle, Willy Wonka & the Chocolate Factory. The Dahl estate knows what’s up, and if they had a brain fart when they let Tim Burton get his hands on Charlie and the Chocolate Factory, well, we all make mistakes.

According to The Hollywood Reporter Spielberg is planning to start The BFG in 2015 for a 2016 release, which gives him time to direct a small movie before then if he wants to. At some point he’ll also be on producing duties for The Adventures of Tintin: Prisoners of the Sun, which Peter Jackson (who produced Spielberg’s 2011 Tintin movie) is directing. That is, assuming Jackson still feels like jumping into that after the Hobbit trilogy wraps. Is this second Tintin movie ever going to get made?