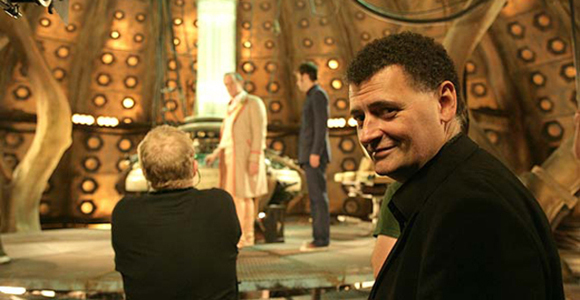 Look, I’m not saying something not even invented yet needs to make sense all the time, but if you’re going to make up your own rules, at least stick to them. And don’t be a jerk when people ask you to explain. I’m looking squarely in your direction, Steven Moffat.

Dan Martin interviewed the Doctor Who showrunner for Blogtor Who (kudos on the blog name) and seems to be the first to get a, somewhat, straight answer out of the guy about the fate of the Ponds. But from the sound of it, he also got some attitude.

The crux of the matter was, the Doctor explained he could not go back to rescue Rory, and in turn Amy, after their last interaction with the Weeping Angels because it would cause a paradox so terrible, New York would rip itself apart. But the language used in the episode was so specific, many wondered after the fact, why couldn’t the Doctor just go pick up The Ponds in New Jersey, Connecticut, Washington, etc. somewhere outside of NYC?Here’s what he had to say when asked to explain that little blip:

New York would still burn. The point being, he can’t interfere. Here’s the ‘fan answer’ – this is not what you’d ever put out on BBC One, because most people watch the show and just think, ‘well there’s a gravestone so obviously he can’t visit them again’. But the ‘fan answer’ is, in normal circumstances he might have gone back and said, ‘look we’ll just put a headstone up and we’ll just write the book’. But there is so much scar tissue, and the number of paradoxes that have already been inflicted on that nexus of timelines, that it will rip apart if you try to do one more thing. He has to leave it alone. Normally he could perform some surgery, this time too much surgery has already been performed. But imagine saying that on BBC One!

Yes, imagine actually explaining logically why The Doctor can’t go back on BBC One. That would be totally weird and not necessary. Insert sarcasm. Basically, Moffat is saying the newer fans, the fans who aren’t deeply obsessed with the show like we are, accepted what he presented as fact and didn’t bother thinking too hard about it. That’s not only rude to Whovians, that’s just plain rude. But here’s the thing, it wasn’t just sci-fi fanatics who took issue with the wonky explanation in the episode. My 10-year old and 7-year-old nieces even knew it didn’t make sense.

“You could never eliminate the possibility of dream sequences and flashbacks, but will the Doctor see them again? No,” said Moffat. “When I was first talking to Karen [Gillan] and Arthur [Darvill] about it, we said ‘let’s make it the proper ending’. Bringing back things just gives you sequel-itis. Just end it and get out. Heaven knows if they’ll appear in some form of flashback – I have no plans to do that I have to say – but the story of Amy and The Doctor is definitively over.”

The actors are leaving the show? Ok. You don’t want them to return ever? Ok. Couldn’t you come up with something as permanent that wouldn’t mean killing them off but didn’t leave most of your viewers tilting their heads? If you think it’s too much trouble or too complicated to explain on the show, maybe think of something else next time.