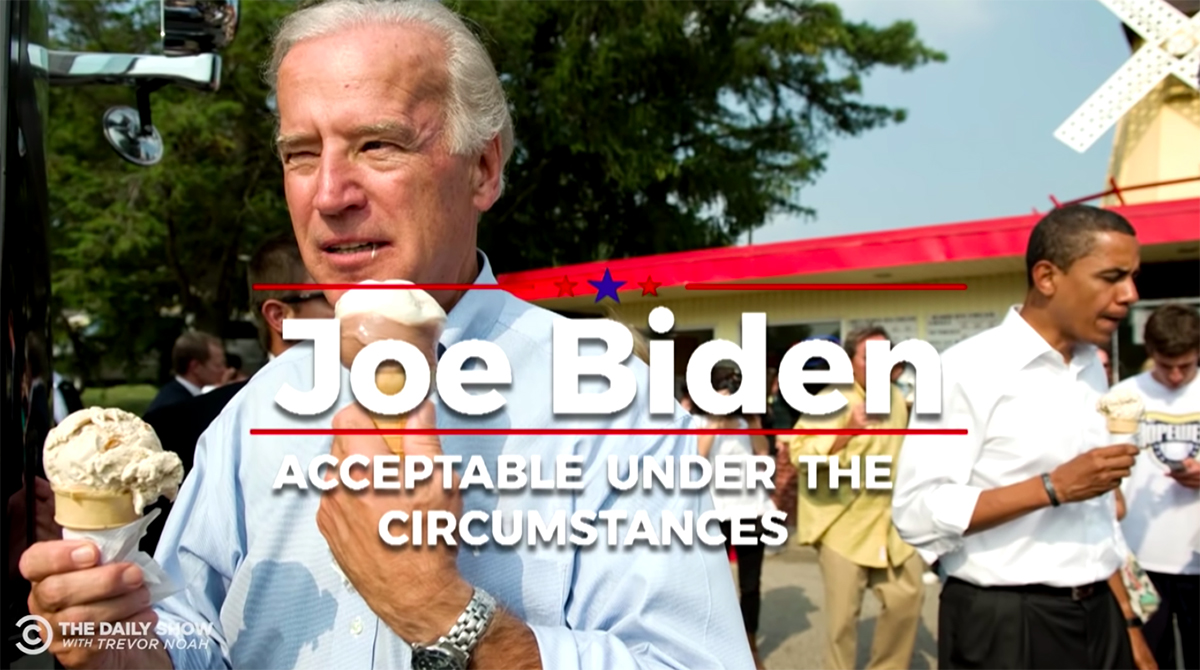 Did you ever wish you could hear Steve Buscemi narrating a video about why we should vote for Joe Biden? Well, you’re in luck! For The Daily Show With Trevor Noah, the Broadwalk Empire star gave us the most relatable campaign video that’s ever existed. Basically, it just said that given the circumstances, Joe Biden would do as our next president.

“We can live with trains,” Buscemi says as he starts talking about Amtrak Joe and his love of trains as an adult man, but the point of the video is this: Joe Biden isn’t Donald Trump, and that’s basically what we have going for us in 2020.

Joe Biden: Acceptable under the circumstances.

Look, Biden wasn’t my first choice. He wasn’t my second, either. I miss the days of Uncle Joe where I could wear my t-shirt that has Joe Biden eating ice cream on it without a huge debate about it, but right now, when I fear every single day because of Donald Trump, I’m going to put my political problems with Joe Biden aside to make sure he gets into the White House, and then I fully plan on holding him accountable for things.

The problem with this election is that we’re basically fighting to get a fascist out of the White House. So, yeah, I voted for Elizabeth Warren in my primary (she was still on the ballot even though I knew she wasn’t running anymore, but whatever), and I fully plan on voting for Biden in November because I cannot take four more years of Donald Trump’s nonsense.

I’ll be completely selfish about it. Though I’ve never been for Trump, right now, he’s terrifying me. My entire family falls into the “high risk” category for COVID-19, and Trump’s unwillingness to take it seriously scares me each and every day because I don’t know what to do to make sure they’re completely safe, and that’s just the tippy-tip of the iceberg of problems with him. The main portion of said iceberg is his racism and sexism, and then all the illegal stuff and corruption, and then it’s probably … you get my point, right? There lots of problems with Trump being president.

So, much like Steve Buscemi’s narration, I agree that, for right now, Joe will do. I’ll rally behind who I want to support on a local and congressional level. I’ll make sure the progressive candidates who fight for my beliefs have my vote, and I’ll also vote for Joe Biden because I know that at least we’ll have someone who takes the coronavirus more seriously, and World War III won’t trend every other day.

Thank you, Steve Buscemi, for nailing my feelings right on the head. I’m going to vote for Joe Biden and Kamala Harris. I’m going to make sure those progressive candidates at other levels of government have my vote, and I’m not going to just say, “Well, at least it’s not Trump.” I’ll fight to hold both Biden and Harris accountable, but at least every day won’t feel like we’re stuck in a damn hamster wheel with no way of getting off of it.

So, come on, man! That’s what makes Joe Biden acceptable under the circumstances.