Interview: Writer Sterling Gates Talks Adventures of Supergirl and Why Kara Zor-El Is His Absolute Favorite 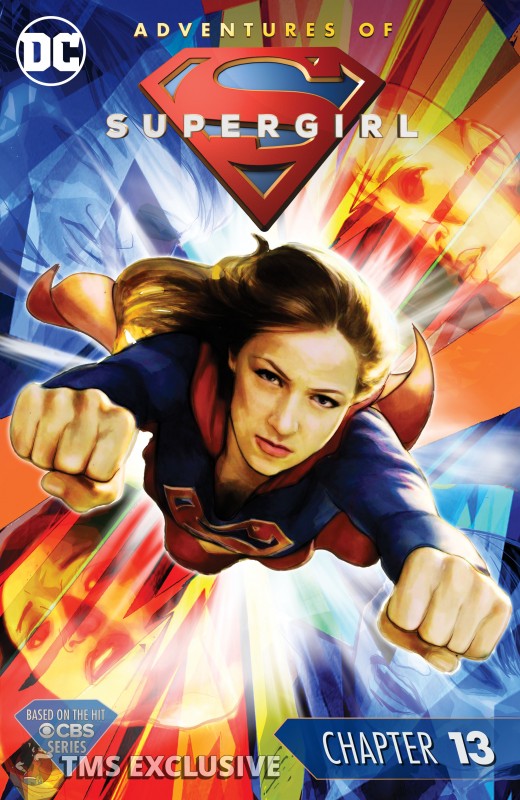 2016 is a great year to be a Supergirl fan. Not only has the Supergirl television show been renewed for a second season over at The CW, but writer Sterling Gates, whose New Krypton Supergirl is a fan-favorite story arc, has returned to writing Kara Zor-El in comics.

He’s been working on Adventures of Supergirl, a 13-chapter digital-first series that is now also available in print issues. The final chapter of the digital story drops on Monday, and the final print issue hits comic shops on July 20th. In anticipation of that, DC has provided The Mary Sue with an exclusive preview from the final chapter, which you can view in the gallery below! It features the villain Facet, an all-new Supergirl villain created particularly with the TV continuity in mind.

I also had the chance to speak with Sterling Gates about returning to Supergirl after so many years, and what it is about her that keeps him coming back. Check out what he has to say about Kara Zor-El, and Adventures of Supergirl!

On other levels, it was as if no time had passed. Writing those first couple issues, I was shocked by how easy it was for me to return to that mindset, and return to the voice. I spent so much time trying to develop a voice for Supergirl back in the day, and then sitting down to write this new series, that voice just came sort of tumbling out instantly. It was a very easy transition for me to make, even though her circumstances have changed.

New Krypton Supergirl was sixteen years old and dealing with her parents seemingly coming back from the dead with the return of Kandor in Geoff Johns’ and Franks “Brainiac Saga.” She was dealing with which planet does she belong to? Is she a citizen of Earth? Is she a citizen of New Krypton? Or is she in the middle, or neither? And I think by the end, we had answered that question. She’s of Earth, but her heart will always be Kryptonian. Which I think keys into a lot of the immigration themes that are in the Superman mythos.

Whereas with the TV Supergirl, it’s ten years later. She’s twenty-four, she’s been here over a dozen years, she’s acclimated to Earth, and she has accepted Earth as her home and is making that work to the best of her ability. So, it’s a slightly different mindset, and it’s a slightly more mature character. Just think of the difference between your reaction to something at sixteen versus your reaction to something at twenty-four. I mean, it’s light years apart.

But for me, that internal voice doesn’t change. And that voice is very bright, optimistic young woman up against a very dark, at times very cynical world.

TMS: It’s interesting that you bring up the “light” voice versus all that stuff going on, because something I noticed about Adventures of Supergirl is that it does seem lighter in tone than the Supergirl you’d written in the past. And not that her voice was darker before, but what she was going through was darker, and was reflected in the tone of the stories. But in this, even though she’s dealing with some pretty intense villains, the banter seems snappier, it seems like she’s cracking jokes more, and the general tone of her dialogue with other characters seems lighter than it ever has. Was that a conscious choice based on the show? Or how did that evolve?

Gates: Well, the show obviously is a factor. She’s very banter-y on the show. But I’m a different writer than I was eight years ago. I like writing snappier Supergirl than I did back then. I also think in terms of maturity, she’s ten years older and she’s had a chance to think of snappier banter than she might have as a sixteen year old. [laughs] I just think she’s funny, and I think Melissa [Benoist’s] voice as that character is very funny, and so I tried to incorporate a lot of that.

When I pitched this book to Andrew Kreisberg, I said “Look, it’s heart, humor, and insane heroics,” which is a line I kind of stole from Geoff Johns a million years ago. And I believe that. I think that’s what makes Supergirl interesting to a lot of people at first glance. There’s heart in every action she has, she always finds the fun and joy of it, and she will go to great lengths to do the heroic thing. Period. And all those things add up to form a very interesting vision of the Girl of Steel, and I’ve been trying to hit that pretty hard.

I also think some of the artwork lends itself to me being funnier. Like, Bengal’s style is so open and embracing, and anyone of any age, of any gender can pick up that first issue and Bengal’s art just sings, man. He’s just so good. So, I rewrote a couple of those first issues to kind of lean into that more, and to make it more accessible. And humor…you can have the darkest story in the world, but if you have humor, people will be willing to go with you on that journey and not be completely turned off by it. And we go to some pretty dark places in Adventures of Supergirl. It is a dark story at times. But by the end of it, hopefully, with this last chapter that’s coming out, people will see that Kara has come through a crucible and come out on the other side and triumphed.

Gates: I think it’s safe to say that in a thirteen-chapter self-contained story, Supergirl will triumph somehow. But as long as Supergirl keeps that bright flame inside her, no matter how dark it gets, she will always light the way. That is always my touchstone for that character.

TMS: With regard to the darker places this story goes, one of the things that struck me in chapters 3 and 4 (Issue #2 in print) is the doxxing storyline, which we at TMS are all about, because we understand the implications of what women on the Internet go through. It seems like, both on the show and in this comic, you’re looking at problems specifically as they affect young women, and I think that’s really cool and interesting. Like, how this would be harder for a young woman to deal with than for a male character. I don’t know if that’s something you agree with, or were doing on purpose, but…

Gates: I think you’re picking up what I’m throwing down.

TMS: You mentioned the final issue, which is coming out soon. I don’t know if there’s anything you can tell us without spoilers? And I do want to talk about the new villain that you created for this story.

Gates: Yeah, Facet is a brand-new villain. I wanted to sort of dust off some old Supergirl villains from the 80s and 90s, which is why we used Rampage and Vril Doxx, but I also felt this was a great opportunity to use a brand-new villain and introduce someone could only be done in the show continuity, and could only relate to Kara because of that continuity. So, we created Facet, and if you’ve been keeping up with Adventures of Supergirl, you already know a lot about Facet. And she is there to challenge Kara in some really intense ways…and it might not go so well for Facet by the end of things. I don’t know that pissing off someone who has super-strength and can fly is a great idea.

So, I was super-excited to do it. I actually designed her, like I drew the design and sent that in, which is something I’ve never done before. I had a very clear vision of what she would look like and be like and what her Fort Rozz uniform would look like, so DC was very gracious in allowing me to design a villain whole cloth. And I think the show was excited to see what kind of villain I’d create using show continuity.

And while I’m thinking about it, Andrew Kreisberg and Ali Adler have been awesome to work with on that series. I’ve been touching base with them as we’ve been going along, because I don’t want to step on any of their plot points, or vice versa. And they’ve been excellent partners to work with on this series.

TMS: What, to you, are the pros and cons of having Adventures of Supergirl come out digital-first, and then in print? Some might say it gives more people access. Others might say that Supergirl not going to print first means that she’s considered “less important.” What’s your take on that?

TMS: Will there be more of this story now that the Supergirl has gotten a Season 2?

Gates: I always have stories to tell with Supergirl, but I haven’t heard back yet, honestly. But I always have stories. I could tell stories about this character ’til doomsday. Either actual doomsday, or until Superman villain Doomsday comes to my house. I could tell Supergirl stories until either of those two things happen. Supergirl is one of my favorite characters hands-down, and I would love the privilege of telling stories with her for a long time. I would love to do it if they asked.

Chapter 13 of Adventures of Supergirl will be available for download Monday via the DC Comics App, Readdcentertainment.com, iBooks, comiXology.com, Google Play, Kindle Store, Nook Store, and iVerse ComicsPlus. The final print issue of the title will be available in stores on Wednesday, July 20th.