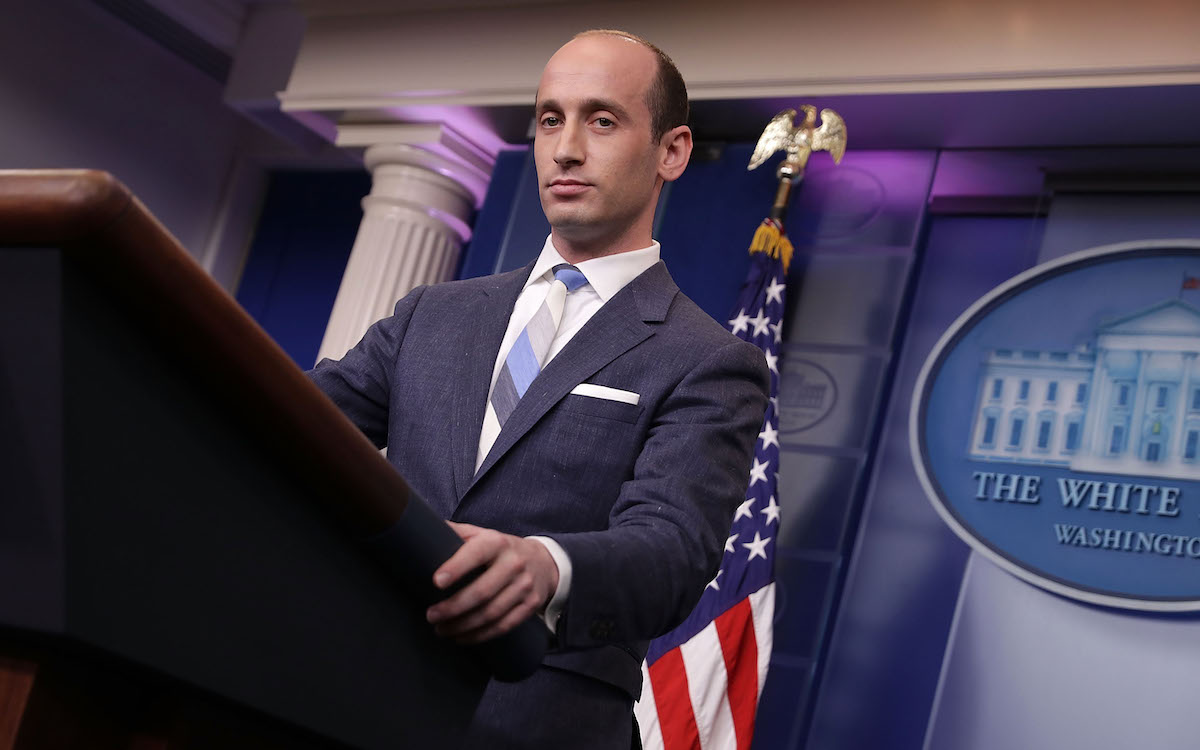 The Southern Poverty Law Center has just published the first of what they say will be a series of reports on a cache of nearly 1,000 leaked emails sent from Trump’s senior policy advisor Stephen Miller to Breitbart reporters. Most of them were sent before Miller joined Trump’s team, back when he was then-Senator Jeff Session’s top aide.

The emails show us everything we already knew about Miller’s incredibly racist belief systems. They also show the far too powerful influence Miller had with Breitbart’s reporting. Not only did he pitch article ideas, but he frequently insisted on what the site needed to focus on as their leading narrative for the day.

The emails also show just how much influence Miller has had in the Trump administration. There are so many of his pitches to Breitbart that we’ve seen make their way into Trump’s rhetoric and official policies. In 2015, he told Breitbart reporter Katie McHugh about the danger of Mexican survivors of Hurricane Patricia being given Temporary Protected Status (TPS) in the U.S., writing “they will all get TPS. And all the ones here will get TPS too. That needs to be the weekend’s BIG story. TPS is everything.”

This past September, Trump was very concerned with TPS for Bahamian refugees from Hurricane Dorian. “I don’t want to allow people that weren’t supposed to be in the Bahamas to come into the United States, including some very bad people and some very bad gang members and some very, very bad drug dealers,” he said.

In 2015, white nationalist Dylann Roof murdered nine people in a predominantly Black church in Charleston, North Carolina. In the aftermath, Miller pitched stories to McHugh about online retailers pulling Confederate merchandise from stores and about the removal of Confederate monuments from public spaces. Then, in 2017, after the “Unite the Right” rally in Charlottesville, North Carolina, Trump tweeted, “Sad to see the history and culture of our great country being ripped apart with the removal of our beautiful statues and monuments.”

A Breitbart spokesperson told the SPLC that “it is not exactly a newsflash that political staffers pitch stories to journalists – sometimes those pitches are successful, sometimes not.” But this was not a normal relationship between a political office and a media outlet. McHugh says “Breitbart editors introduced her to Miller in 2015 with an understanding he would influence the direction of her reporting.” And now there is a direct line between what Miller was pushing to Breitbart through his position in the office of a senator and what he gets to do now that he is working directly for the president.

“What Stephen Miller sent to me in those emails has become policy at the Trump administration.” -Katie McHugh, former editor at Breitbart

On one hand, there is very little in these emails that show us anything we didn’t already know to be true. There have been stories about his racist, xenophobic beliefs since, according to his extremely sad Wikipedia page that I wish I’d never read, the age of 12. But likely because he was born into a well-to-do Santa Monica Jewish family, it seems that for most of his life his bigotry was written off as youthful trolling–a sort of childish rebellion against his affluent liberal community.

As he grew older,  he was written off by many as a kind of “alt-lite” troll, someone who liked to poke the bear and stir the pot more than literally revert us to and incredibly racist whites-only Calvin Coolidge-era immigration platform. And even if he did want that, well, it’s not like he had the power to do it, right??? Except now he actually does.

White people being snarky about the reporting on Stephen Miller’s emails — “oh, duh, we KNEW this” — are undermining a key aspect of combating white supremacy. In the face of constant gaslighting, anything than can be documented should. It’s vital now and for posterity’s sake.

2. 70,000 immigrant children have been detained this year.

That’s not a coincidence. That’s white nationalism enacted in our government from the very top.

So while no one should ever have been dismissing Miller as a mere troll, we now have substantial evidence of the damage he’s causing to the country. But what might be the most surprising part of this entire story is the source of the information. Because that source, the former Breitbart writer Katie McHugh, is setting an example for what a step towards real atonement from a former-alt-right/white supremacist has the potential to look like.

Back in May of this year, BuzzFeed ran a profile of McHugh with the headline, “Get Out While You Can.” That was her message to fellow alt-right figureheads and believers. McHugh was fired from Breitbart for a tweet reading “There would be no deadly terror attacks in the U.K. if Muslims didn’t live there,” but that was in no way her worst thought shared publicly on the internet. It was solidly representative of her beliefs on immigrants, Muslims, and non-white people. She and Miller were, in fact, a perfect match.

So when she said wanted to “leave it all behind,” that BuzzFeed profile read as appropriately skeptical and not entirely quick to give her the benefit of the doubt. She wrote off a lot of her past behavior as jokes or trolling–the exact same outs so many people gave to people like her and Miller, as if that sort of “joke” from a prominent media or political figure didn’t push actual bigotry into a more powerful public space.

It’s one thing to say you’re done with that sort of thing. That’s fine. But McHugh’s willingness to supply the SPLC’s Hatewatch with so much correspondence between her and Miller–which makes her look just as terrible as Miller–is actual follow-though. Alexandria Ocasio-Cortez recently gave a speech about the importance of being open to welcoming people like McHugh back into the fold if they genuinely want to de-radicalize from those sorts of beliefs. I know that for many of us, that can be a hard idea to think about on a practical level. But I have to be honest, if that process involves leaking 1,000 emails from Stephen Miller, that’s a good first step.

As for Miller, if this were any other time and any other administration, he would already have been fired. Now, absolutely no one is holding their breath waiting for that to happen. Trump didn’t ignore Miller’s racism and he didn’t just know about it–he used it to shape his presidency. It will be interesting to see how he addresses this (if he ever does) but it is undeniable and incredibly depressing to know that Stephen Miller will be just fine.