"I know clean coal sounds like an oxymoron, but so does President Trump."

Stephen Colbert continues to bring the comedic fire to The Late Show, and last night, he roasted Trump’s executive order that rolls back President Obama’s environmental protections. We often use hyperbole about Trump destroying the world but this time he’s actively working to destroy the world. Luckily we have Stephen Colbert on our side.

In the segment, Colbert uses the old “girlfriend in Canada” lie to tackle Trump’s specious claims about “clean coal”:

Back in high school, I had a girlfriend in Canada who was a clean coal miner. She told me they mine the clean coal and put it on that silver-bullet train and then they send it to Narnia where the Keebler Elves use it to power the pump on the fountain of youth.

Bravo, sir. We are then visited by a very special guest, Woodsy Owl—the ’70s-era icon for the U.S. forest service, famed for his slogan “Give a hoot! Don’t pollute!” 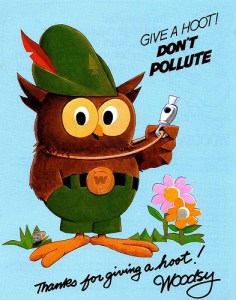 Colbert and his crew imagine that these days, Woodsy would have a different message for the kids. I’m laughing through my tears for the dying planet.