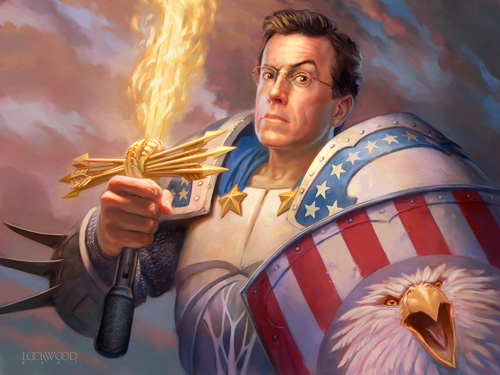 There aren’t too many people in the world who manage to be both beloved celebrities in the real world and beloved celebrities on the Internet, but Stephen Colbert is definitely one of those people. And it seems that Colbert may just love the Internet, too. Last night in his interview, Colbert praised social news site Reddit. But he didn’t just give it a passing mention. No, he spoke of it with the childlike wonder and glee of a kid who just got back from Space Camp and is full of stories to tell.

Here’s how the conversation in his interview with tech author Nicholas Carr went:

Then later, on a broader scale than just Reddit…

Colbert: The Internet is preparing us for the coming apocalypse it is bringing upon us.

Here’s the video of the Reddit mention, complete with Colbert’s happy squeals. (A better quality version for which embedding has been disabled can be viewed here.)

So those happy sounds Colbert just made? Imagine thousands of those, mostly all at once, and you have Reddit’s reaction. Minutes after the show was broadcast, one Redditor grabbed this screenshot of the self.reddit page, and linked it on the pics Reddit under the name “Reddit just came all over itself.” Click the image to enlarge. 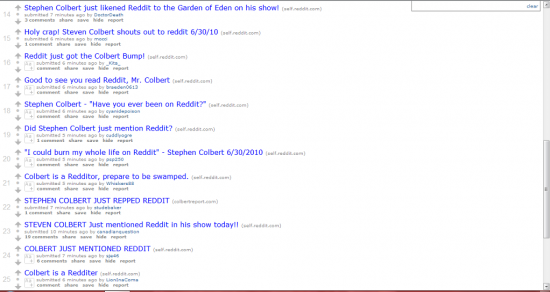 And now, atop Reddit’s front page, is this unsurprising campaign: “Stephen Colbert just said he likes reading reddit. Lets get this on the frontpage and coerce him to do an interview/IAmA,” with, at the time this was written, just over 2380 points.

It really is a Colbert Nation.