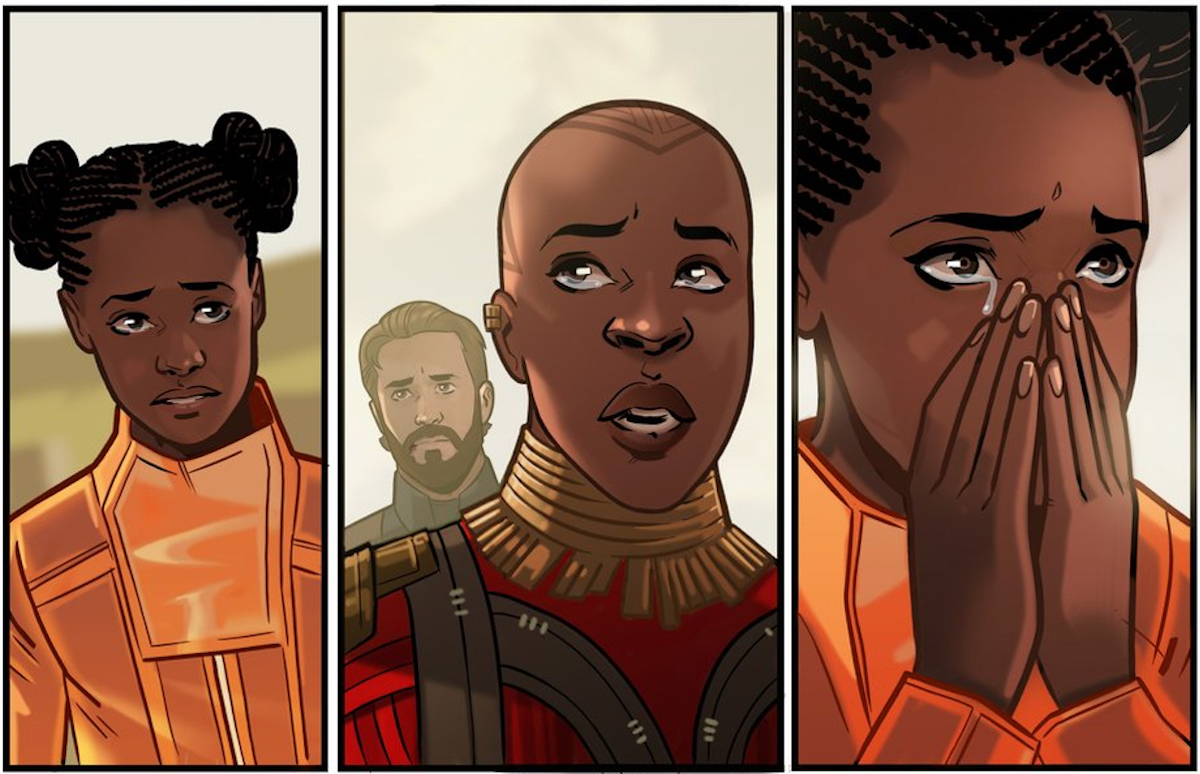 Stephen Byrne has created stunning comics panels that imagine what might have come to pass post-Infinity War. My heart hurts.

Byrne, a London-based artist who has worked on titles like Mera: Tidebreaker, Green Arrow, and Justice League of America, uses his skill to explore the Infinity War story in some hugely painful directions with his creation “After the Snap.” 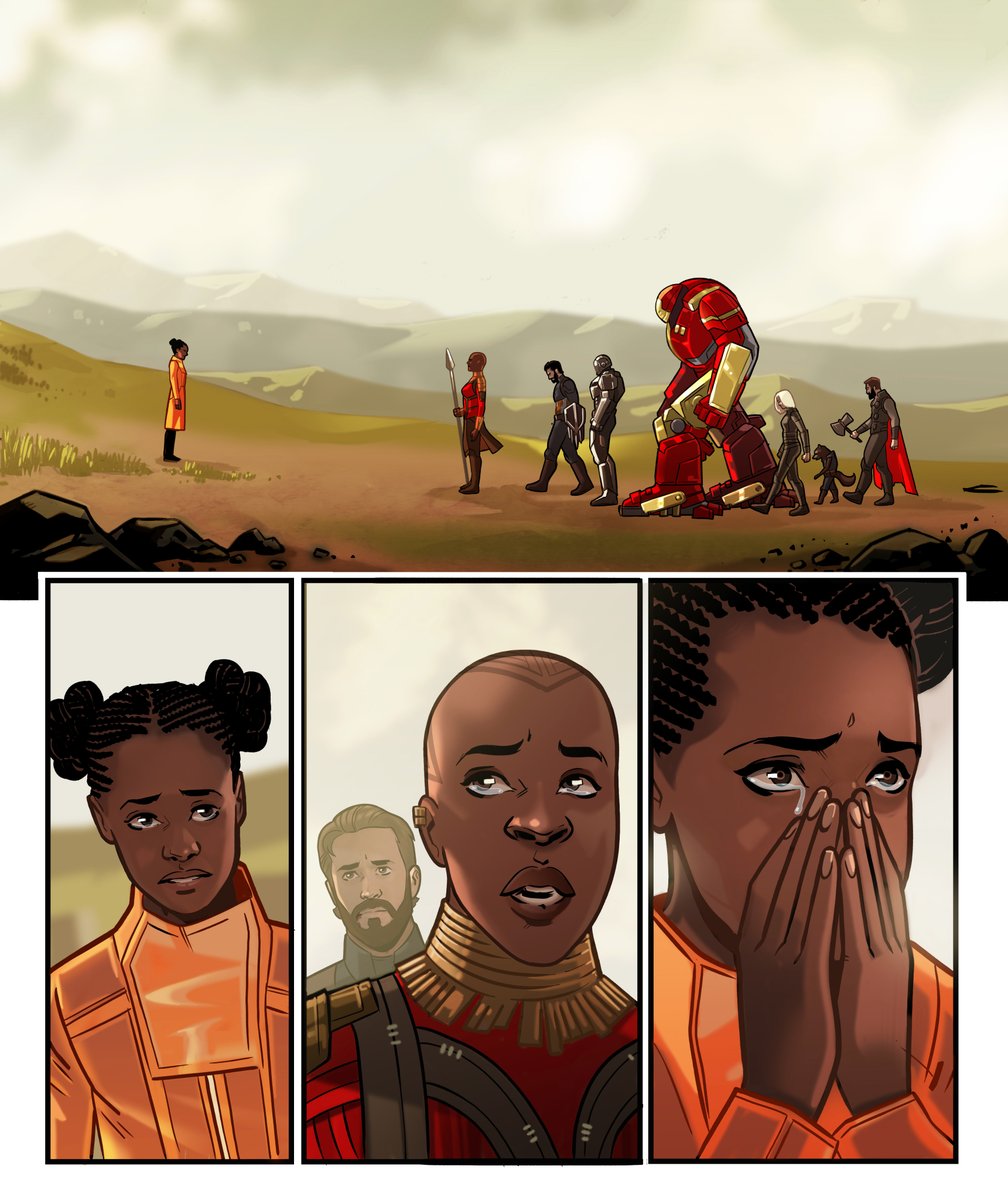 In the first “After the Snap,” which made me gasp, we see the remaining Avengers, Okoye, and Rocket returning defeated—and approaching Shuri, who reads from Okoye’s expression what has happened to her brother T’Challa. It destroys me how everyone is bent under the weight of their losses—even Bruce seems to slump in the Hulkbuster armor. 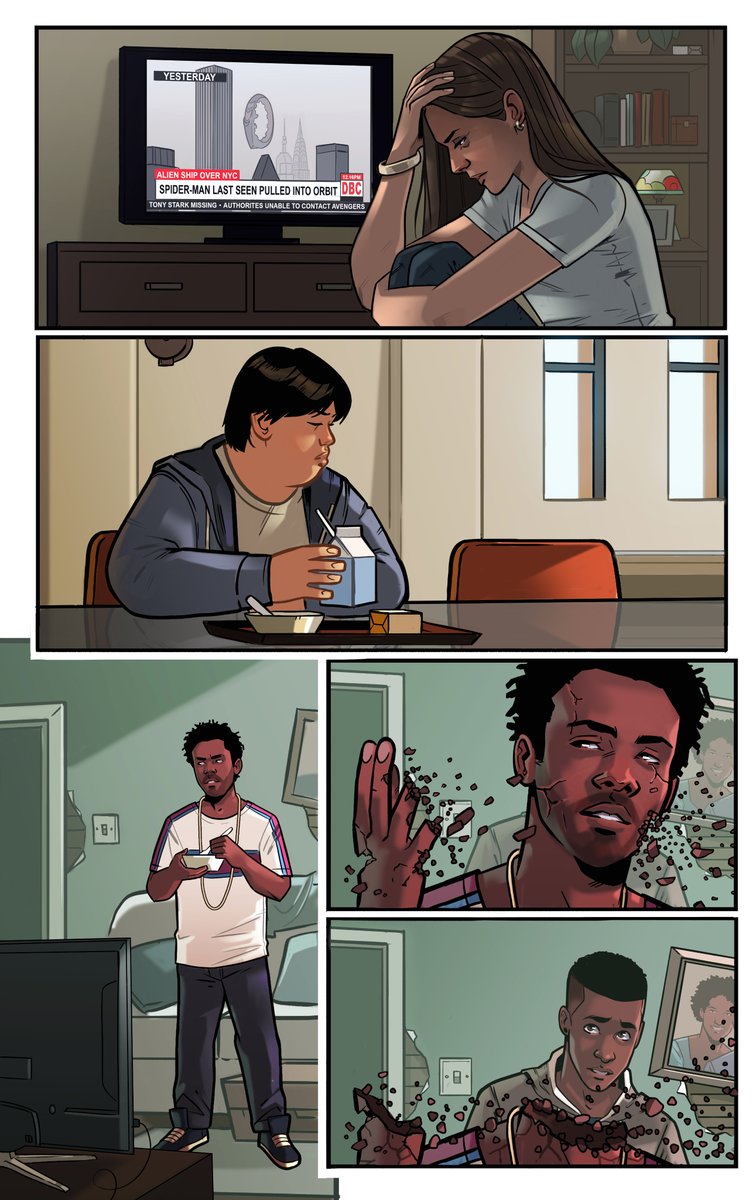 Do you enjoy pain? Then let’s hop on over to the Spider-Man ‘verse, where a grieving Aunt May is left without even full knowledge of what’s become of her nephew Peter Parker—the TV on behind her has the headline “SPIDER-MAN LAST SEEN PULLED INTO ORBIT.” In the next panel, Ned Leeds looks mournfully at the empty chair in the school cafeteria where his best friend should be. 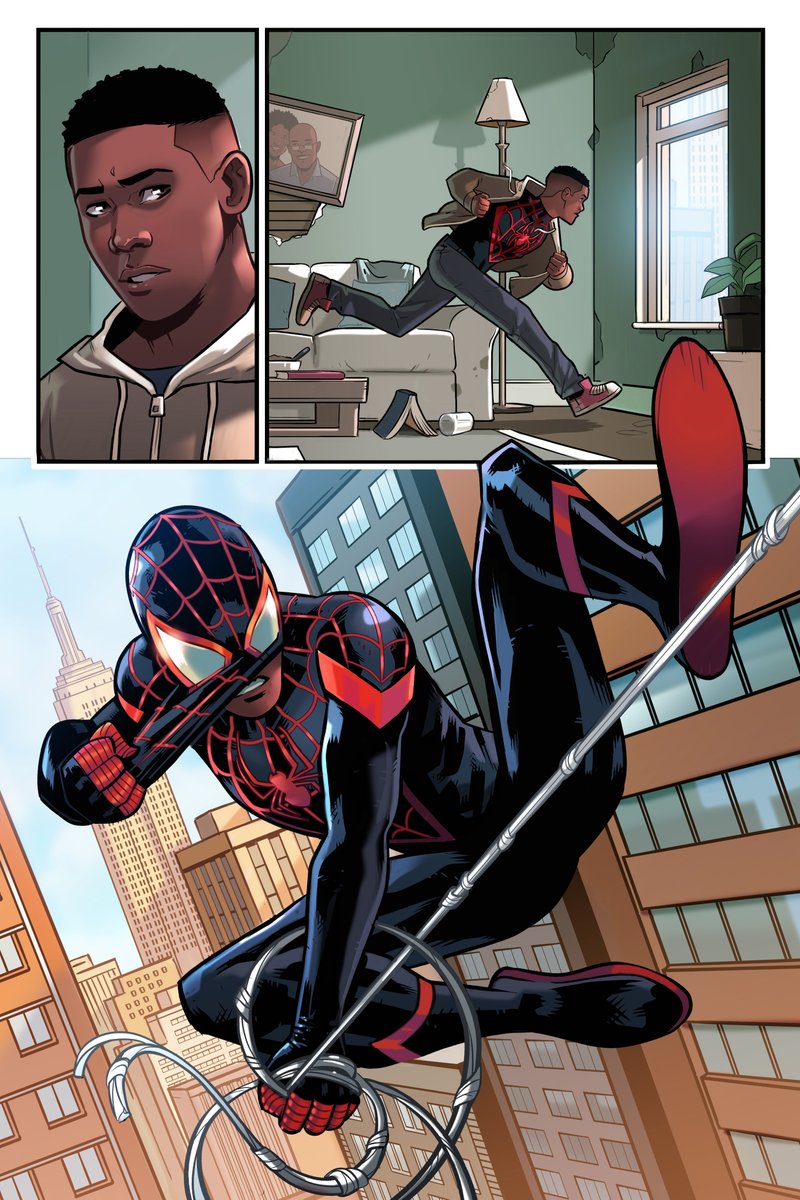 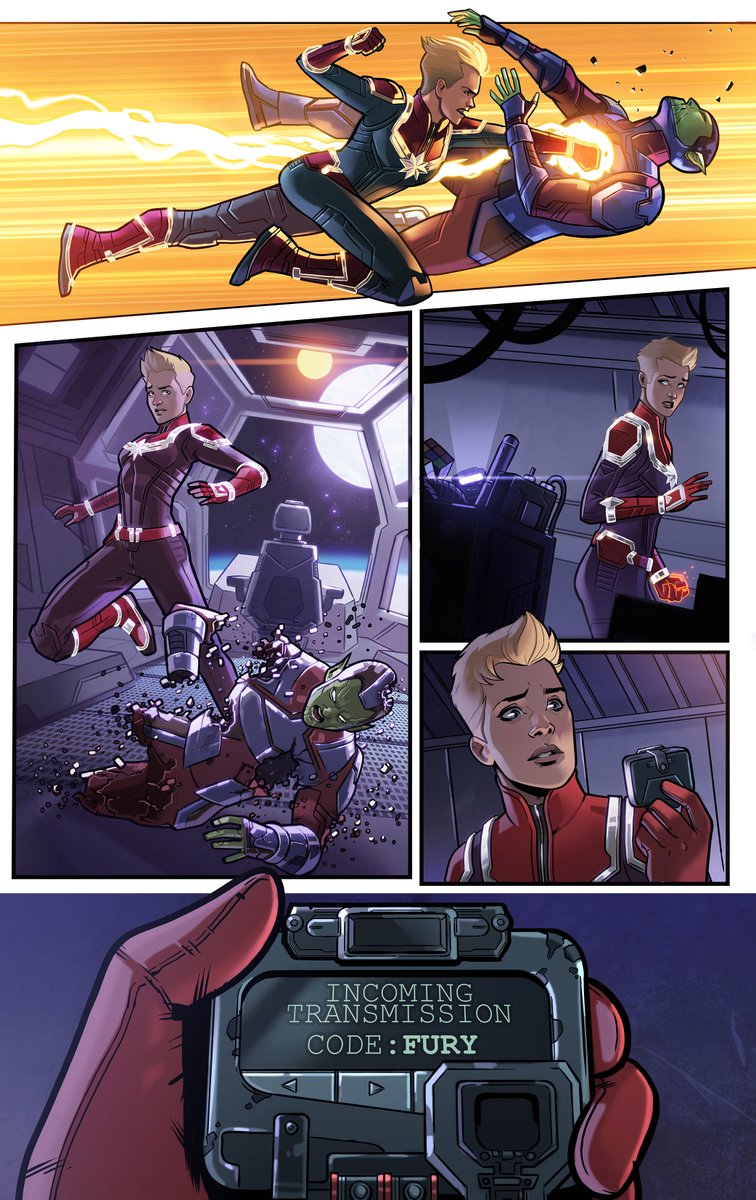 Carol Danvers, our very own Captain Marvel, is fighting in space when her Skrull foe vanishes before her eyes. Then a confused Carol notices an alert, and she picks up a matching cosmic beeper to the one Nick Fury used to send for her help in the post-credits scene of Infinity War. Carol receives the S.O.S. from Earth. 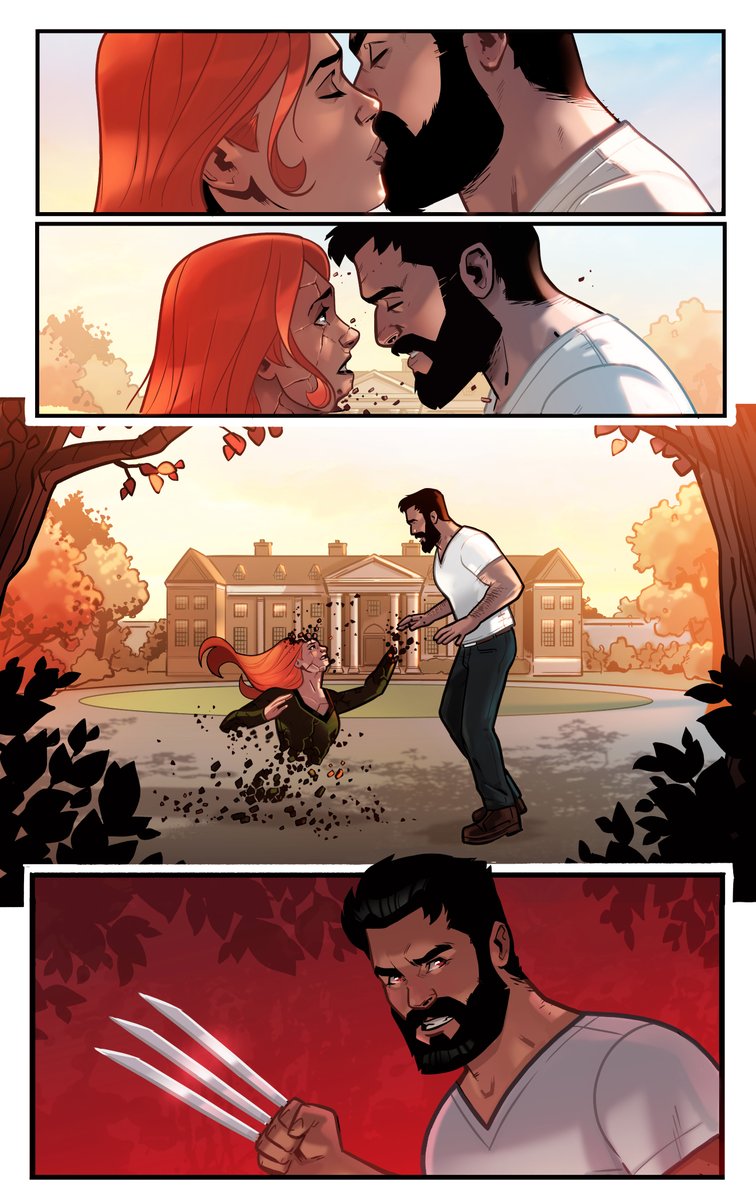 Traveling into other pockets of the Marvel realm, Byrne shows us Wolverine and Jean Grey finally enjoying a moment of romantic peace—that is until Jean disappears into nothingness as she reaches desperately for Logan. The last panel shows Logan, tears in his eyes and claws out, ready to face whatever has taken her from him.

I got sad chills just writing out the text to go with Byrne’s incredible creations. It’s one thing for us to speculate on the Infinity War aftermath—it’s another to see it rendered in such a beautiful, realistic fashion.

A Twitter user on Byrne’s original thread summed up my emotions nicely:

Which image knocked you over the most? I think for me it’s Shuri, eyes full of tears and hands over her mouth in shock.