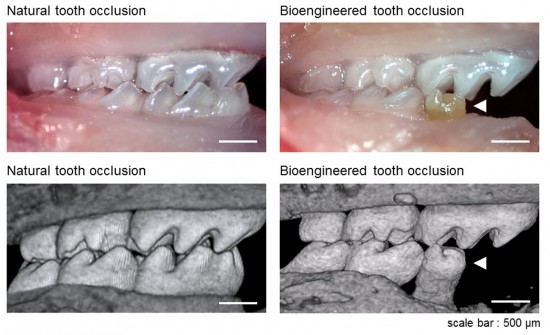 Chow down on this: scientists in Japan have used the stem cells of mice to grow replacement teeth that are fully functional when implanted into the mouse’s mouth. The “bioengineered tooth unit,” otherwise known as the tooth grown from the stem cells, was created by a team of researchers led by Takashi Tsuji at Tokyo University of Science.

This is exciting research, because even though only done in mice, it helps researchers understand the processes needed to grow and nurture stem cells outside of the body. Developing laboratory grown 3D tissues for human use is a major goal in biomedical research right now. However, the caveat with this study is that it was performed using stem cells that were already differentiated into tooth cells. This means that the cells can grow continuously, but they can only grow into teeth. This is different from pluripotent stem cells, which are stem cells that can grow into any type of tissue.

According to Tsuji, the fact that the “seed” cells, the stem cells that were used to grow the teeth, came from the molars of mice was a critical component of the research. The cells did not have to be coaxed to develop into the enamel and bone found in teeth because they were already programmed to do so.

If research of this kind could be translated and reproduced using human teeth, it could provide another alternative for people who have lost their teeth due to decay or injury. The paper describing this research was published in PLoS One.