What Ended Worse: Game of Thrones or the Skywalker Saga? | The Mary Sue

What Ended Worse: Game of Thrones or the Skywalker Saga? 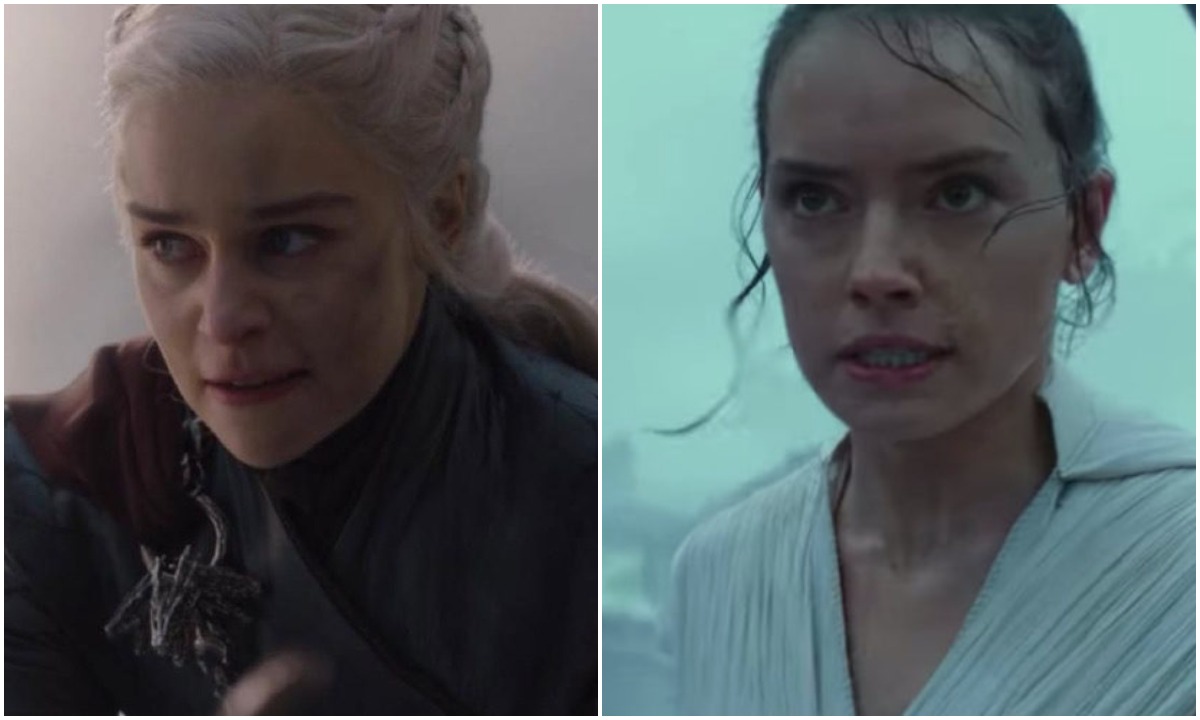 We saw a lot of ends in 2019, and we’ll see more in 2020. Ending a massive franchise with a rabid fanbase is hard, there’s no doubt about it. Two of the biggest sagas to take their “final” bow (because we know more content from those worlds is coming) were Game of Thrones and the newly-minted Skywalker saga. And both were pretty disappointing to a lot of folks.

Now, I know we’re literally comparing apples and oranges here with television and films, but the two properties are fantasies about cyclical tyrannical power, the threat of an ill-defined darkness encroaching from afar and Gwendoline Christie in armor. They also boasted what seemed to be empowered women who sometimes ended up short-changed by the narrative.

In terms of both properties, I will say that the flaws in both their endings came from rushing things and packing too much story into cramped spaces. This is especially true when it comes to the ultimate villain reveal of Daenerys and Emperor Palpatine. In this case, I need to give the edge to Game of Thrones. At least some track was laid for Dany’s big turn – though it wasn’t enough – whereas Palps came back from the dead OFF SCREEN! Point: GoT.

How did the two compare in terms of character in general? Game of Thrones had a far bigger cast than Star Wars, by its nature, but it also had more time and thus it was also able to give more characters more screentime to theoretically make their final endings more meaningful than some of the rushed resolutions of Star Wars, but … were they?

We can’t do one-to-one comparisons but I would say I found Leia’s truncated ending reaching out to her son marginally more satisfying that Cersei doing literally nothing but stare our windows for an entire season before dying. We can also compare Finn and Jaime, who both seemed to be on a certain course going into the end but ended up backtracking. At least Finn lived and he had the Force while Jaime Lannister died with a rock to the head.

Comparing beard guys we love, did Tyrion really end up better off than Luke? He got everything he wanted … after murdering his family and girlfriend and a few other bad things. Shouldn’t he have gotten the Kylo treatment? Or is John Snow our Ben Solo? In terms of acting, Adam Driver beats Kit Harrington by a country parsec and Ben’s (earned) tragic end was far more emotional to me than Snow’s.

So. .. I think the second round goes to Star Wars.

Tied going into the final and I guess we have to talk about the final thematic statements of two. Which were—um. Well. Hm. Game of Thrones seems to be on the side of “power corrupts, your bloodline can make you crazy and you can’t break from the past without burning it all down and killing a lot of people?” I think? Bitches be crazy? Women get stronger through suffering and rape and some of them still die?

The Rise of Skywalker, despite the fact that fans didn’t like the Rey is Palpatine reveal was very much about how you can always choose to be good, and how compassion and forgiveness do matter when it comes to finding the light. There’s not a lot of compassion in Game of Thrones, and so much character “growth” came from suffering – often female suffering – and racist violence.

I … have to give this one to Rise. Despite the flaws, it does end on a far more hopeful, and moderately thematically satisfying, note than Game of Thrones did. People of color survive, no women get sexually assaulted, and the break from the cycle of the past isn’t achieved via the destruction of a character we admired for eight seasons.

So, there we have it. I guess the answer is that Rise of Skywalker was at least fun and hopeful so it has the edge. Also you could actually see the big action scenes, so that was nice too.

Game of ThronesStar Wars: The Rise of Skywalker