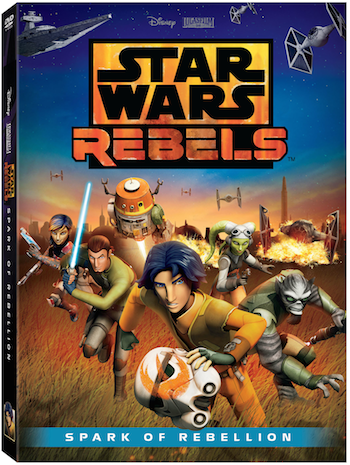 Whither my Star Wars nerds, my Jedi-in-training, my happy denizens of the Galaxy Far Far Away? We have a giveaway for you—the hour-long movie Star Wars Rebels: Spark of Rebellion. It serves as sort of an amuse-bouche for the full Star Wars Rebels series, which debuted on Disney XD last night.

Spark of Rebellion is out on DVD today, but for all you lovelies who like free stuff (so all of you), we have five copies to send out into the United States and Canada. You’ll get not only the movie itself, but also a Ghost 3D model ship, four Star Wars Rebels shorts, and “a never-before-seen piece that takes you deeper into the world of Star Wars Rebels and the upcoming season.”

by Thursday, October 16th at noon EST. You must be following us on Twitter, otherwise we won’t be able to DM you if you’re one of our randomly selected winners. This contest is open to Star Warriors in the US and Canada only, but if you’re elsewhere and have a friend or family member to whom we can ship the DVD on your behalf… well, it’s not like we’d ever know the difference.

Via the official press release, here’s what Spark of Rebellion is all about:

The television movie garnered rave reviews at last month’s San Diego Comic-Con fan event for its story (set between the events of Star Wars Episodes III and IV) and its look — akin to the classic Star Wars trilogy. The series designs are influenced by the work of original Star Wars concept artist Ralph McQuarrie.

The story unfolds during a dark time when the evil Galactic Empire is tightening its grip of power on the galaxy. Imperial forces have occupied a remote planet and are ruining the lives of its people. The motley but clever crew of the starship Ghost — cowboy Jedi Kanan, ace pilot Hera, street-smart teenager Ezra, the “muscle” Zeb, warrior firebrand Sabine, and cantankerous old astromech droid Chopper — is among a select few who are brave enough to stand against the Empire. Together, they will face threatening new villains, encounter colorful adversaries, embark on thrilling adventures and become heroes with the power to ignite a rebellion.