Why the "Star Wars" Score Is So Memorable | The Mary Sue 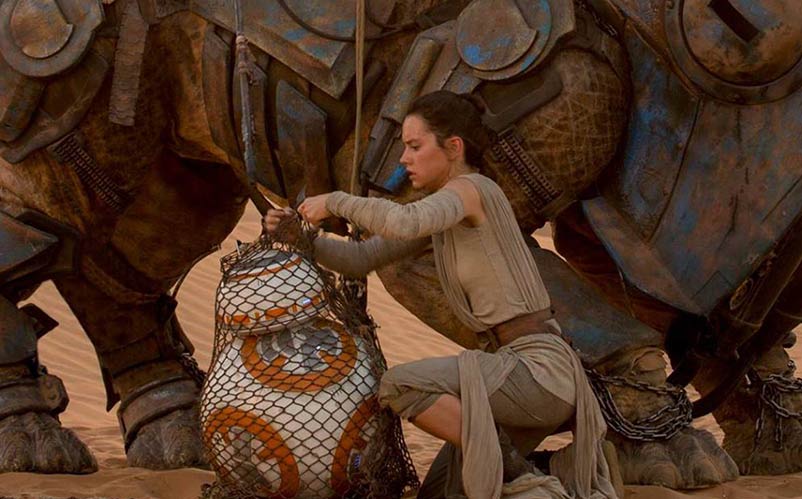 Tufts University recently interviewed Frank Lehman, one of their assistant professors of music, to ask why so many of John Williams’ scores are so memorable—and why the Star Wars themes, in particular, are so darn earworm-y. Lehman talked about how Williams’ approach emphasizes character motifs in a way that many modern composers have moved away from, and he also revealed how some fans are using those motifs to try and figure out Rey’s backstory and fate.

Lehman explained, “[John Williams] focuses a lot of his energy on creating memorable melodies and themes, going through a lot of different combinations until he has exactly the right sort of phrase structure and melodic contour so that it really becomes an earworm … That’s not common anymore, though. Film compositions over the past ten to twenty years have moved away from very memorable themes in favor of more ambient and more mood-setting music.”

In Star Wars, in particular, Williams also uses character themes that reoccur and interact throughout the movies. This technique, known as a leitmotif, goes all the way back to nineteenth-century opera. “In Star Wars, character is important—perhaps more than narrative coherency. There are very striking archetypal characters, and Williams writes striking archetypal themes for them,” Lehman said, “Both the original movies and the sequel trilogy have a character-theme approach. In the prequel trilogy, the music was a little less character-theme defined— maybe because the characters themselves were poorly defined, along with a lot of other things.”

Of course, you can’t discuss the music of Star Wars without discussing the Imperial March. Why is that so darn memorable? “It has this characteristic progression between G minor and E flat minor,” explained Lehman, “and various transpositions of that—with qualities of evil, power, magic, and mystery that can be traced back to Wagner’s Das Rheingold … It’s an example of a chromatic progression. Most music that people listen to is generally constrained to what’s called the diatonic scale—what you would think of as the normal major or minor succession of pitches. The diatonic scale is perfectly capable of suggesting any kind of emotion. But when you start adding notes that are outside that seven-pitch scale, you get a lot more capability for suggesting the strange, the other, or the marked.”

“Another example of the Vader progression can be found in Gollum’s theme from the Lord of the Rings series by Howard Shore. The way the notes move in a very smooth and snakelike fashion between those two chords can map onto evil characters. To the extent there could be said to be evil in music, it’s probably the Darth Vader progression.”

Of course, Lehman emphasized that other factors have contributed to the popularity of Williams’ work. It certainly helps that Star Wars is such a popular franchise, and the 40-year arc between the first film and Episode IX gives Williams a lot of space to play and develop the music. “I don’t know of any creative endeavor in mainstream filmmaking where there has this been this consistent through-line of music by a single person,” Lehman said, “It is an unprecedented opportunity to develop themes, to invent new things, or to bring back things that were only briefly heard twenty-five years ago.”

Williams did just that with one particular scene from The Last Jedi. In the original trilogy, Williams initially composed Princess Leia’s theme as “a love theme … this very romantic and erotic kind of musical theme. That doesn’t necessarily fit Carrie Fisher’s performance all that well.” Once he found out (along with the rest of us) that Leia and Luke were actually brother and sister, he debuted the Luke and Leia theme as the “major new thematic centerpiece” of the Return of the Jedi score. But he only used it sparingly in the film itself: “just two renditions, neither of them given time to breathe.”

Then, for The Last Jedi, Williams brought it back. “It is used in the very affecting and beautifully scored moment when Luke and Leia meet on the salt planet,” said Lehman. “I felt extremely gratified to hear the theme then. And it’s like saying goodbye, in a way, because I doubt we’ll have another opportunity to hear it.”

So what else can we find in Williams’ music? Some fans, apparently, are trying to figure out Rey’s backstory and eventual fate by analyzing her theme. Since Williams uses so many character themes, often twining them together or having them call back to each other, they’ve been listening to hear whose music Rey’s theme maps onto. “People have located in her melody allusions to the Star Wars main theme, to Darth Vader’s theme, the Force theme, the emperor’s leitmotif, Kylo Ren’s theme—that’s just the beginning. If you wanted to connect it to the Ewok March or Jabba the Hut or Jar Jar, I’m sure there is a way. I really find it interesting that this has been the tactic that so many have taken in predicting what will happen with her character on a narrative level.”

But when has that ever stopped a fandom? I, for one, am now repeatedly listening to Rey’s theme to see if I notice anything.