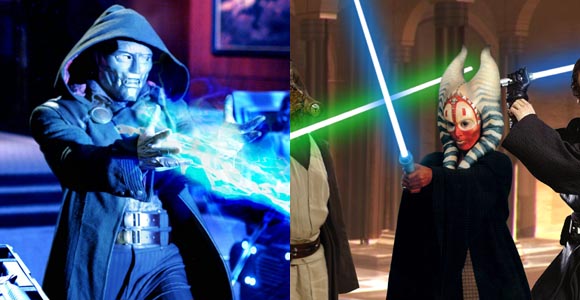 Two upcoming blockbusters look like they’re close to choosing some major roles. But don’t get your hopes up by any rumors that have been floating around, we have nine male actors to name.

We’re still a bit in the dark as to what direction J.J. Abrams is planning to take Star Wars: Episode VII but according to Variety, four actors are being looked at for what appears to be a major Jedi role. They write:

After meeting with several young actors this past year, sources tell Variety that “Downton Abbey” thesp Ed Speleers, “Attack the Block” star John Boyega, Jesse Plemons and theater actors Matthew James Thomas, and Ray Fisher are among the men J.J. Abrams is eyeing for the lead role. Though some insiders warn the search is still ongoing, multiple sources confirm to Variety these actors have moved to the top of the list in recent weeks.

Plemons has been mentioned before for a major role in the film but the other names are new. It’s worth noting both Boyega and Fisher are people of color, so if all the actors are up for the same role, the casting process is pretty open (at least compared with what we’re used to). We previously heard Abrams was looking for a female actress who is either of mixed race or black to possibly play Obi-Wan Kenobi’s daughter or granddaughter as well so let’s hope some of this diversity actually winds up in the film. Variety writes about this latest casting round, “Exact details of the character are vague but the part is believed to be a Jedi apprentice.”

All I will say here is, save Bill Weasley for something better.