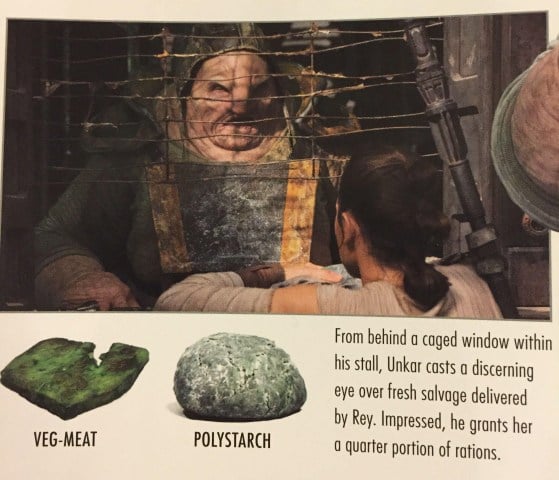 Remember the part in The Force Awakens when Rey prepares to eat her ration packs, courtesy of a trade with Unkar? She mixes some powder with some liquid, and all of a sudden, the concoction rises to form a small loaf of green bread. According to the Star Wars visual dictionary, Rey’s quick-rising roll is called “polystarch,” and it’s actually a salvaged military ration. Here’s the most interesting part, though: that quick-rising technique was done entirely with practical effects.

You wouldn’t believe how long it took to actually perfect that one, that little tiny gag in the film. It started off with the mechanics of getting the bread to rise and the liquid to disappear, but then there was the ongoing problem of what color should the bread be? What consistency should it be? Should it have cracks in it? Should it not have cracks in it?

It took about three months. The actual mechanics of it was fairly simple, but the actual cosmetic side took a lot longer.

This has to be a point of pride for Corbould — he spent a lot of time perfecting a prop for just one brief moment, but it paid off. A simple search for “Rey bread” on Twitter proves how many people noticed. That’s a testament to the value of practical effects!

Anyway, when will Rey’s ration pack be available on the market, along with all the other Star Wars merch out there? I guess the recipe needs some tweaking — according to MTV, the bread “tasted terrible and probably had next to no real nutritional value.” Oh, well.

(via MTV, image via Imgur)