Where's an absurdly well-informed astromech droid when you need one? 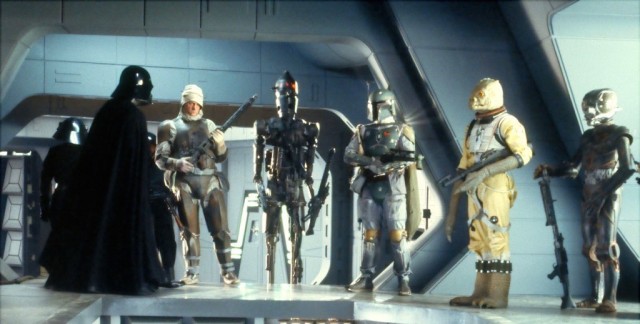 Can’t get far without seeing some speculation on Star Wars these days, right down to what theaters will be showing the super special first teaser for Star Wars: The Force Awakens. What follows is squarely in the speculation realm, but also in the very important realm of “fun to think about,” which we value very highly over here. So let’s talk about crazy Star Wars movie spinoffs and the future of the universe in animated television.

With the demise of Clone Wars, Star Wars has returned to the small screen in animated form with Star Wars Rebels. But since Rebels is set somewhere between the prequel trilogy and original trilogy of the series, there’s always been something of a capped limit on how far the show can progress, and, naturally, there’s an even harder limit on its ability to make any references to the new additions to the setting that will come with the new movies set after the original trilogy. According to the unnamed sources of /Film, Lucasfilm is planning to keep Rebels around for a couple more seasons… just in time to start up a new animated series set in the same time period as Force Awakens.

While that’s not exactly what fans of the series might like to hear, nor is it confirmed by Lucasfilm, it makes a lot of sense. Once Disney and Lucasfilm get us all cosy with their post-trilogy characters, they’re going to want to leverage those connections to get folks to watch a cartoon series.

But television isn’t the only place that Disney is pushing Star Wars these days. There are also the upcoming spinoff films; movies set in the Star Wars universe that are not a part of any core trilogy. While we know they’re coming, and we know that Gareth Edwards (Godzilla) and Gary Whitta (The Walking Dead: The Game) are directing and writing one, there’s been precious little other info to go on. Once again, /Film feels like they have a source with a possibility that makes sense.

What the group is trying to steal is one of the most important linchpins in Star Wars history — they are out to steal the plans for the first Death Star.

/Film has a whole rundown of other rumors that this story jives with, but even they admit that they couldn’t get confirmation from Lucasfilm on this one, so there’s no guarantee that this is what’s actually going on behind the scenes.

Still, I can say this much: I would watch that movie.