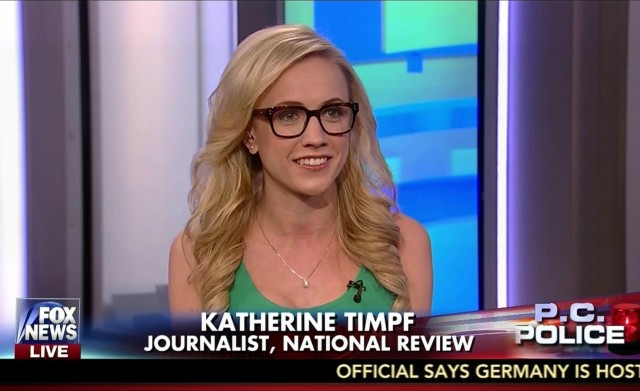 A Fox News contributor found herself on the receiving end of death threats earlier this week—from Star Wars fans—when she appeared on an early-morning talk show on the network and began talking about some of the trolls that had come out of the woodwork to make fun of her for not having seen the films.

In a segment that aired last month, Katherine Timpf mentioned that she had no interest in watching Star Wars: “Yesterday, I tweeted something, and all I said was that I wasn’t familiar with Star Wars because I’ve been too busy liking cool things and being attractive. People threatened my life.”

The Internet’s response? Well, one doesn’t have to look very far to find both death threats and YouTube videos lashing out against Timpf, but the ironic part is that the show she was on is self-labeled as a satirical news program—so one would think that it would have been easy to discern that her remarks may have not been entirely serious, and to not take them personally at all?

As for Timpf, she says that she is entirely aware that the reaction of a few Star Wars fans isn’t representative of the fandom as a whole, and she won’t be apologizing for her words that were clearly made in jest.

“Obviously, the totally insane whackjobs who have been attacking me don’t represent most Star Wars fans,” she wrote in a post for National Review Online (which also details some of the abusive comments—just as a warning for those who click through). “But the fact that so many adults have responded with so much unhinged emotion astounds me.”

Most fandoms have a pretty decent sense of humor when it comes to making fun of themselves, and it’s also good that Timpf isn’t losing sleep over her harassers. At the end of the day, we should remember that Star Wars fandom will always be a lot stronger than a few satirical remarks—for better or for worse.

(via Vulture, image via Fox News)