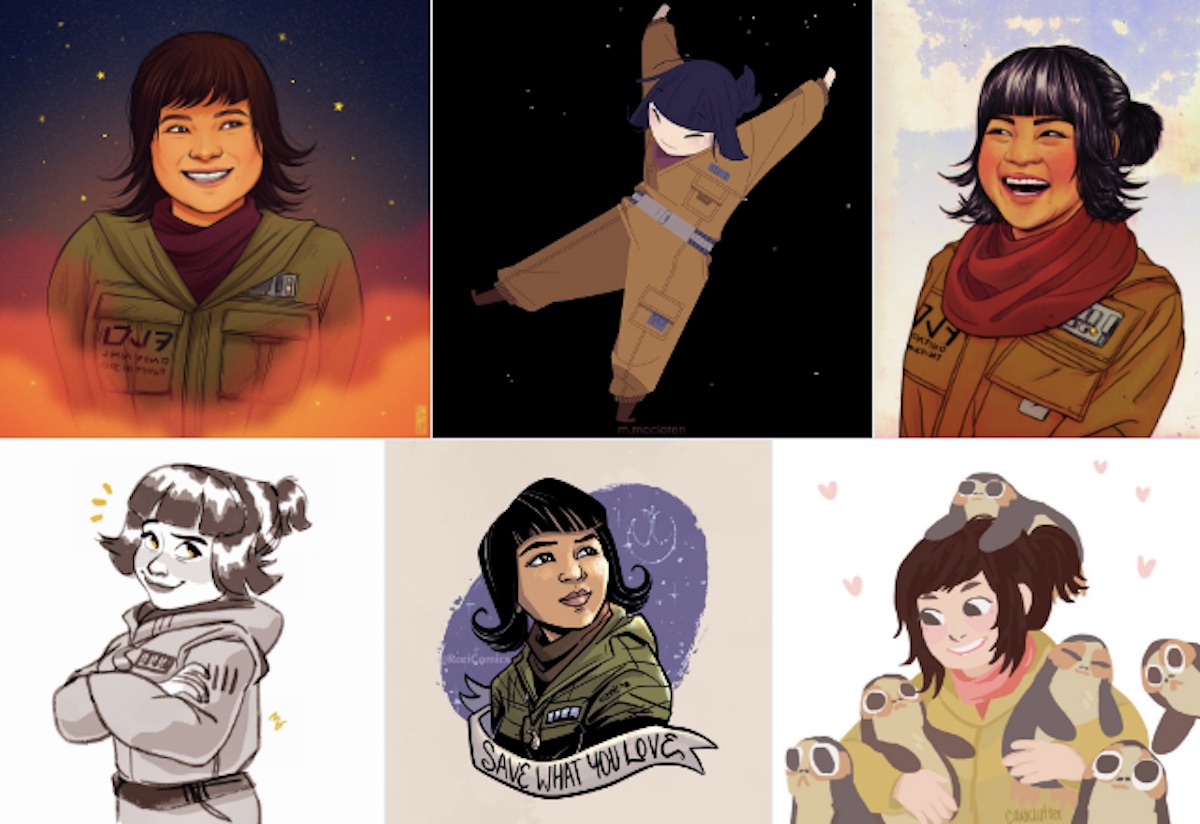 The Internet can be a terrible place, as we saw with the racist and sexist harassment of Tran and her character, but it also has some redeeming factors. Many people have spoken out against what happened to Tran, including prominent Star Wars figures like director Rian Johnson and Luke Skywalker himself, Mark Hamill. Fans have begun to show their admiration for Tran and Rose through the communal magic of creativity.

A picture can speak a thousand words and make a big impact, and that’s why the hashtag #FanArtforRose, in which many artists have drawn art of Rose Tico in support of Tran, is so heartwarming and encouraging to see.

Johnson currently has one of the artworks as his Twitter banner:

There’s an abundance of goodness on the Twitter tag. Let’s take a look.

If you have a single ray of sunshine in your soul, get #FanArtforRose trending. pic.twitter.com/bYliSJTqo1

#KellyMarieTran deserves better, I hope she gets a bigger part on the next SW movie and keeps showing all the love and enthusiasm she had when she made TLJ #fanartforRose pic.twitter.com/E03IPeviTl

That’s how we will win this. Not destroying what we hate. #FanArtforRose pic.twitter.com/2dN2TUquwI

#FanArtforRose #KellyMarieTran If you watch a movie ( or read a comic book or anything) and you feel a strong compulsion about going to social media and being toxic with the creators, please go to see a therapist, help yourself. pic.twitter.com/gXT7IvBAgQ

The online treatment of @kellymarietran is deplorable, and yet in the face of hatred and disproportionate negativity she does what other trolls can never do and that is move on. She is truly a hero of the resistance and an inspiration. #FanartForRose pic.twitter.com/OaQmLrxs4l

And one last time today because I didn’t realize there was a hashtag for it.. #FanArtforRose pic.twitter.com/DyAHE1CPDW

Didn’t have a lot of time to do much but here’s my little piece of ❤ for Kelly Marie Tran and our beautiful Rose. #fanartforRose pic.twitter.com/TnFwBL4b5d

it’s perfectly ok to step away from something that hurts, i hope you won’t have to in the future though ♥️ #fanartforrose pic.twitter.com/gquEpDg4Ir

Not an artist but I did this a while ago bc it’s an amazing moment even if it was cut and I think about it often. Wish I’d had a hero like Rose growing up. #fanartforrose #KellyMarieTran #smashfascism pic.twitter.com/wG9ehl0B72

Rose Tico is a wonderful, inspirational character. I love her compassion, her loyalty, and her commitment to doing what’s right. Kelly Marie Tran is a talented actor and such a sweet, positive force. Sending lots of love her way. ❤️🌹#rosetico #KellyMarieTran #FanArtforRose pic.twitter.com/nQ9nFW6kJL

“That’s how we are going to win. Not fighting what we hate, but saving what we love.” #fanartforrose #Rosetico #kellymarietran pic.twitter.com/a1i0Tltmqx

There’s art of Tran as well—and it’s not hard to find an appropriate reference to draw from, considering the public generosity and enthusiasm she’s shown toward fans.

There are so many lovely and heartfelt creations for #FanArtforRose that I regret not being able to post them all. Check out the ever-growing tag throughout the day to support Kelly Marie Tran, Rose Tico, inclusivity in Star Wars, and have some of your faith in humanity restored.

#FanArtforRose now this is the Star Wars fandom I remember and love.

Whenever crappy stuff happens, I often think about the old Mr. Rodgers quote (who was in fact quoting his own mother) when said: “always look for the helpers.” Turns out the last 24 hours online has been pretty special if you click this: #fanartforrose https://t.co/rea3JaOxlH

Now if you’ll excuse me, it’s dusty in here all of a sudden.