“Leave any bigotry in your quarters; there’s no room for it on the bridge.” – Captain Kirk, “The Balance of Terror”

But while bigotry may not have a place on the Enterprise’s bridge in the 23rd century, here in the 21st it apparently has a place on the official Star Trek Facebook page, where a small number of very loud fans have decided to repeatedly share sexist, racist, and homophobic comments.

The page, which is run by StarTrek.com under the auspices of CBS Interactive, has over 3.4 million fans and is an important site for Trek fans like me to gather, discuss their favorite shows and characters, and get information from CBS about upcoming promotions and events.

(Trigger Warning for screencaps of sexist, racist, and homophobic comments, including rape jokes)

But all too often comment threads turn into something like what happened on August 13, when the page asked fans to “Describe Sulu in one word.” The top responses were “gay” and “Asian,” and many responses went further than that into outright homophobic and racial slurs. I am going to share a few examples because I think they’re necessary to illustrate the severity of the problem. 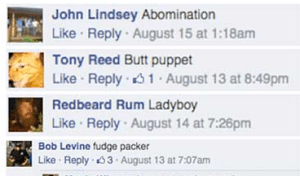 After seeing this I got together with another Trek fan I met through Tumblr, and we started documenting. We collected and categorized examples of more homophobic and racist comments, as well as sexist comments, particularly rape jokes, like this one about Star Trek VI‘s Valeris, played by Kim Cattrall:

If you want to feel horribly depressed you can find our full package of examples here—all are taken from a single two-week period. They range from horrible comments about Jennifer Lien’s (Kes from Voyager) weight, to jokes about Yar growing up running away from “rape gangs,” to comments about how Kira (DS9) is probably cranky because her tampons are made out of “Ferengi fur.”

The more I documented and shared with other Trek fans, the more I heard from others who felt just as concerned. Overwhelmingly people kept saying that there was such a big disconnect between the sexism, racism, and homophobia on the page and the vision of Star Trek, which values “infinite diversity in infinite combinations.”

I’ve also sent the request and examples of page comments and good existing comments policies (tons of other sites have them!) in a letter offering to answer any questions and provide any other support I can for these changes to be made. The response has been overwhelmingly positive, and the petition has prompted many people to share their feelings about the unwelcoming environment on the page.

“As a young woman, it is disheartening to see many fans having backward views of the many female characters. Female characters who are assertive are slammed as being b*tchy and annoying; some even go so far as to state that these characters should die—how can future Kathryn Janeways or Kira Neryses be born if such character traits are demonized?” one 20-year-old fan from Singapore wrote.

And here’s another testimonial I received:

“I’m an eighteen year old girl, and I Liked the page on Facebook to get updates on the Star Trek franchise (which is one of my favorite things). I do feel alienated pretty consistently by offensive comments, especially the rampant misogyny that pervades comments on posts like the one that went up today.

“I’m pretty pissed that the moderators of the page haven’t cracked down more on this sort of behavior, and also it’s pretty ironic that it is happening on posts about Star Trek, which is all about… well… not this. It takes too much energy to engage in these discussions, and the awful community on that page is really off-putting to me.”

Although the overwhelming response to the campaign has been positive, a couple of concerns have been raised. I want to take a minute to address them and hopefully preempt them being raised again in response to this article.

Concern 1: Why can’t the users who are offended just explain to people why they’re upset and try to talk it out?

Two reasons. First, it shouldn’t be the  job of, for example, a person of color to wade through racist comments and spend time trying to educate the people making them. Women, people of color, and LGBT people shouldn’t have to brace for attacks just to get a chance to talk about Star Trek. Second, when we went through the page we found several examples (included at the end of our collection) where fans had tried to call out sexist, racist, or homophobic remarks and were subjected to harsh backlash and even threats. Expecting fans to moderate the page themselves without backup from an official page presence places unfair expectations on them and is just plain unrealistic.

Concern 2: These comments are awful, but things like this happen. We can’t take away freedom of speech.

As a feminist blogger and media commentator, I rely on freedom of speech. I take it very seriously. However, freedom of speech only applies to our right to say what we want in our own spaces without fear of government suppression; it does not give anyone the right to say anything they want in spaces (including online platforms) owned by someone else.

Just say, for the sake of argument, I believe and want to spread the following message: “Jonathan Archer is the best Trek captain ever, and if you disagree you’re an idiot!” (Don’t worry; I don’t actually believe that).

I have every right to say that in my house or on my own website. I can get a banner with a giant picture of Scott Bakula printed up and wave it at cars from the side of the road. I can hand out pro-Archer pamphlets. But I can’t make passers-by stop to listen if they don’t want to. I can’t grab a megaphone and stand on a box in the middle of a Starbucks and shout it at people. And if I barged into a Captain Janeway fan club meeting and started calling everyone there an idiot, they’d be totally in their rights to kick me out of their space.

Likewise, CBS and StarTrek.com (as well as Facebook) have the right to protect their brands and set terms of use for their online spaces.

What we have on the Star Trek Facebook page is not free speech; it is free reign for a small but loud group of users to spew sexist, racist, and homophobic comments and to troll and intimidate those who object. And that means many women, people of colour, and LGBT fans feel less free to speak up in that space.

It’s time to bring a little bit of  Star Trek‘s vision and values into our fan spaces. Please take a minute to sign the petition and help make the official Star Trek Facebook page a more welcoming place for all fans. As Star Trek creator Gene Roddenberry once said:

Jarrah Hodge is a feminist blogger from Vancouver, B.C. She runs the feminist blog gender-focus.com and analyzes Star Trek from a feminist perspective at trekkiefeminist.tumblr.com. You can also find her on Twitter @jarrahpenguin.