"The One With the Droids You're Not Looking For" 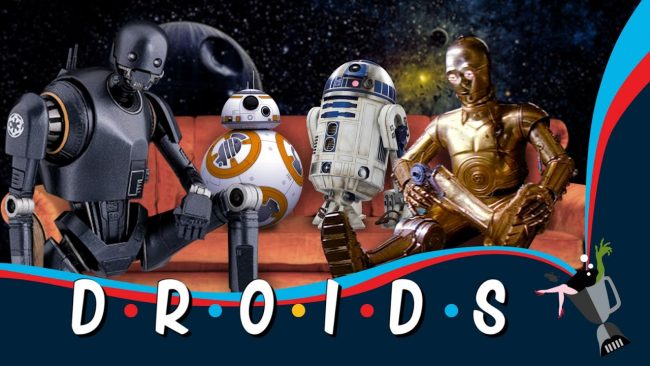 Listen, I know I say this a lot, but… this is exactly what you didn’t know you needed this morning: a mashup between Star Wars droids and the Friends theme song.

The fine folks over at Darth Blender cut together some really nice clips of our favorite droid babies and just played the theme song to Friends over it. Watching the video, I got to thinking about what kind of zany sitcom-esque hijinks might ensue if these sweet babies were put together in an apartment on Coruscant or something.

That last one’s especially good because it ends with a really stunning cliffhanger. R2’s at the altar with his droid-partner-to-be, and they go, “Beep boop,” to which R2 replies, “Beedeeleedeeboop.” I know, right?! It’s the faux pas heard ’round the galaxy, I tell ya. Folks were talking about that one around the caffeine synthesizer at work for months (or whatever galactic standard unit of time is equivalent to multiple lunar cycles on your planet).

Anyway. If we do end up getting a Star Wars television series, I move that this be the one. You can call the pilot episode “The One With the Pilot” and have it be about BB-8 and Poe Dameron and there you go, your pilot episode guest star is already lined up, it’ll be wonderful. We can retcon K-2SO back into being, it’s fine.