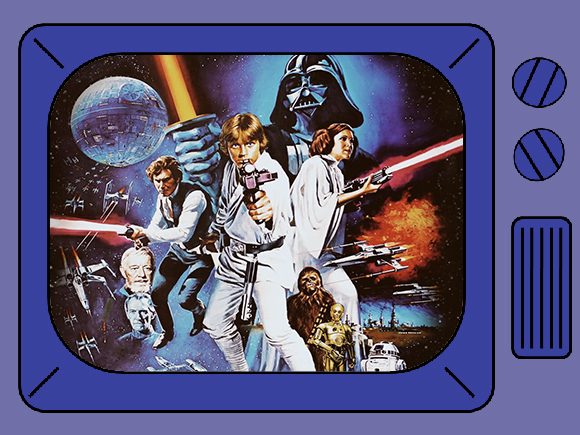 ABC entertainment president Paul Lee has caused everyone on the Internet to freak out (well, everyone in the geek corners, anyway—I’m not all too familiar with the rest of it) by saying that there might be a Star Wars show on ABC now that their parent company Disney has bought LucasFilm. Lee! You’d better mean it. You can’t just say things like that and then flake out.

What Lee said is that they’d “love to do something with Lucasfilm, we’re not sure what yet” and that they’re going to look at the live-action series that Lucasfilm producer Rick McCallum was trying to get going a few years back.

According to EW.com, McCallum’s series was written in part by Battlestar Galactica‘s Ron Moore and

centers on the story of rival families struggling over the control of the seedy underside of the Star Wars universe and the people who live within the subterranean level and air shafts of the metropolis planet Coruscant (the Empire’s urban-sprawl-covered home planet). A bounty hunter may be the main character. Set between the original Star Wars film trilogy and the prequels, the time period allows for all sorts of potential appearances from classic figures from the Star Wars universe.

McCallum once called the scripts the most “provocative, bold and daring material that we’ve ever done,” which, as Tor.com points out, doesn’t mean a heck of a lot from the guy who produced the prequels. (They know what’s up over at Tor.) Lee says they’re looking at other LucasFilm-related options, too, so if a Howard the Duck show gets greenlit, remember, he never said it’d definitely be Star Wars.

Any live-action Star Wars series has always been prohibitively expensive to make, which is why it’s more feasible now that Disney’s purchased LucasFilm; ABC won’t have to pay to license the property, plus Papa Disney will be paying for the whole thing. Sound familiar? Lee breaks down the connection between the possible Star Wars show and S.H.I.E.L.D., saying:

“It’s going to be very much up to the Lucasfilm brands how they want to play it. We got to a point here with Marvel, a very special point, where we’re in the Marvel universe, and very relevantly so, but we’re not doing The Avengers. But S.H.I.E.L.D. is part of The Avengers. So maybe something oblique is the way to [approach the Star Wars universe] rather than going straight head-on at it.”

I’m not super-excited about this news, if only because I have my doubts that it’s going to happen anytime soon. Remember that Disney has said they want to do multiple trilogies and spin-off films, too. It reminds me of Steve Carell‘s character in Anchorman saying “I love carpet. I love desk. I love lamp.” Disney, are you just looking at things and saying you want to make them?

That said, if you said you wanted to make a Rogue Squadron movie… well, that’d be OK… I guess. *shuffles feet*