Star Trek’s Secret to Success: The Works of William Shakespeare | The Mary Sue

Star Trek’s Secret to Success: The Works of William Shakespeare 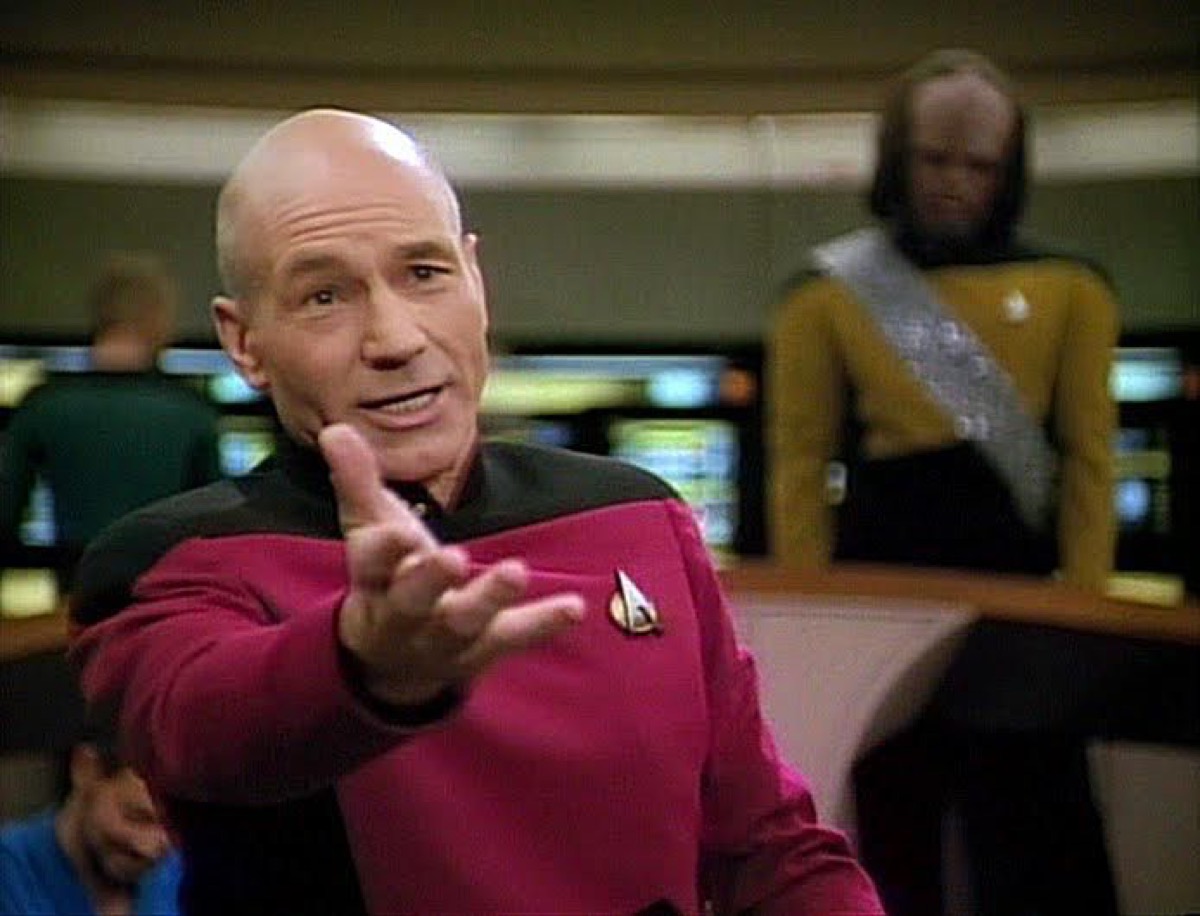 You have not experienced Shakespeare until you have read him in the original Klingon.

Star Trek celebrated its 50th birthday back in 2016, and with two new series airing this year—Star Trek: Picard and Discovery season 2—it shows no sign of slowing down any time soon. As the franchise boldly goes into its 3rd quarter century, I feel compelled to explore a thread I have recently spotted deeply woven into the fabric of Star Trek’s very existence, there from the very beginning, possibly the ultimate secret behind its continued success …

The works of William Shakespeare.

The relationship between Shakespeare and Star Trek is as old as Star Trek itself. From the first season of the original series, Shakespeare has appeared, providing a plethora episode titles (“Dagger of the Mind,” “The Conscience of the King,” “All Our Yesterdays,” and “By Any Other Name,” to name but a smattering), inspiring some gentle plot ripoffs, and as a figure the characters themselves revered and loved to quote whenever the opportunity arose.

Spock, in particular, has an affinity for busting out an apostate Shakespeare line, a character trait that features not only in Leonard Nimoy’s iconic incarnation, but in Zachary Quinto’s AOS and Ethan Peck’s Disco turns in the pointy ears.

There is the theory that Macbeth is said to be a cursed, unlucky play partly because, as a famous crowd-attracting but licensing-fee-free show, it is often put on by theatres already on the verge of disaster. This might explain why it’s one of the plays that escaped genocidal dictator Kodos’s broke-ass, janky theatre troupe is seen performing on their cross-galaxy tour in the original series’ “The Conscience of the King,” before they go on to perform the episode title-providing Hamlet, to predictably macabre ends.

Things may have reached their peak with Star Trek VI: The Undiscovered Country, a film named after a line from Hamlet, in which the discussion of Shakespeare forms a major part of the thematic development of the plot. Not only that, but one of the main villains is a Shakespeare-obsessed Klingon, whose possibly facetious claim that Shakespeare is a Klingon invention has led to the real-life translation of several Shakespeare plays into the working conlang Klingon language by beautiful industrious nerds, including Hamlet and Much Ado About Nothing.

Then, Shakespearian veteran and dream boy Patrick Stewart was cast as Captain Jean-Luc Picard in The Next Generation, and things really hopped off from there. This partnership stayed strong and visible throughout Voyager, Deep Space Nine, Enterprise, and Discovery. Ironically enough, the series to show the most restraint on utilizing Shakespeare is Stewart’s current encore in Picard, though one can only hope they are simply biding their time for maximum drama. 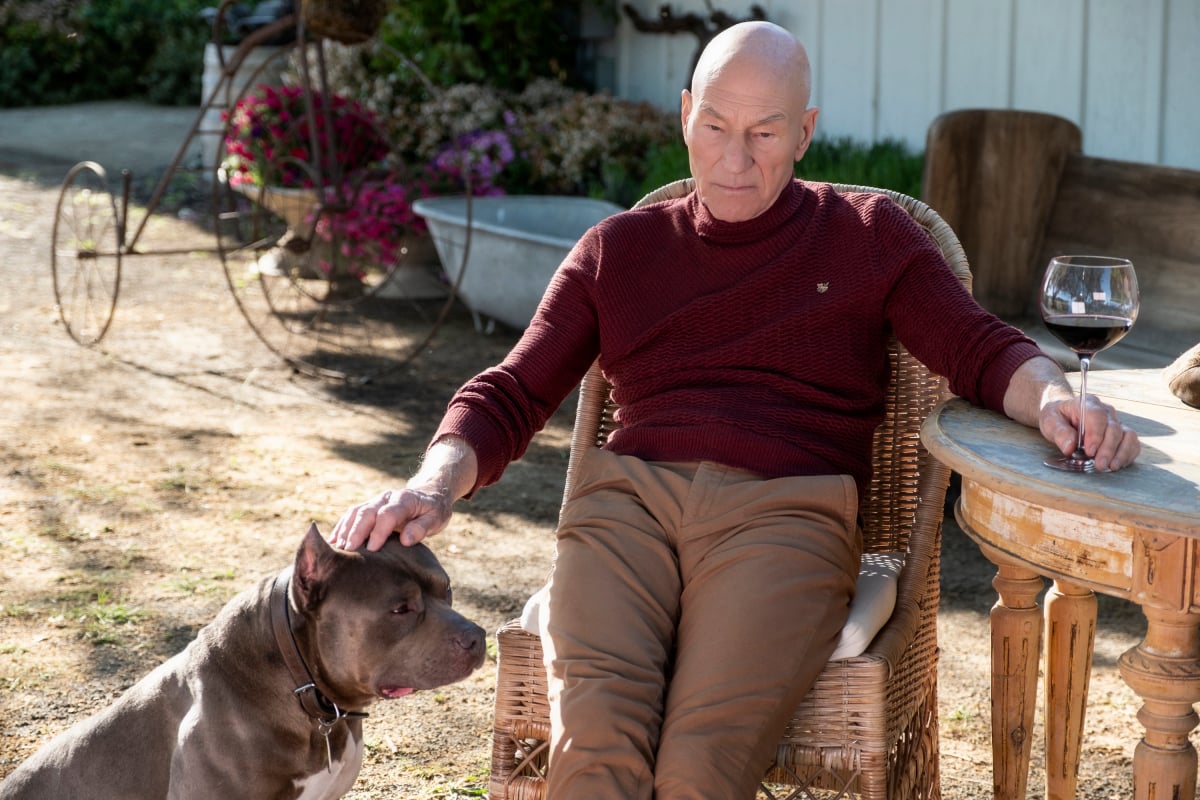 So why? That is the question. Why has Star Trek returned again and again to the Shakespeare well, and why does it work so damn well for them? What is it about these two properties that, on the surface, may seem so very disparate, that instead go together like peaches and cream, fish and chips, or an emotional human and stoic Vulcan command team?

Let us be crass first. Star Trek is a show set in a utopian post-scarcity, post-capitalist society, but it continues to be made in a near-dystopian capitalist society where creators have to contend with such things as copyright, royalties, and fair use. One of Shakespeare’s enduring, endearing qualities for other artists is not (just) his genius, but the fact that he lived and died long before copyright creep was even a gleam in Walt Disney’s eyes.

Shakespeare’s works can and have been quoted, referenced, reworked, and straight-up ripped off by everyone because they can be used freely by anyone. The ease of interactivity with Shakespeare’s work is to the advantage, not the detriment, of his position. People can appreciate him all the more for finding him in so many new places and seeing him in so many different ways.

Shakespeare has proven he can go the distance. A man still popular 400 years after his demise, it seems fairly unlikely his hot streak is going to break any time soon, making him a safe touchstone for characters who live in the far future to be a fan of. For some reason, it’s so much less jarring when people in the future like things that are old now, rather than things that are contemporary to us.

The Enterprise-D crew’s love for Shakespeare and Sherlock Holmes has aged a lot better since the ’90s than Tom Paris’s appreciation for 3D glasses (though Paris functions as grim but accurate prediction that no matter how far into the future humanity strives, there will always be mediocre white boys obsessed with WWII history.)

Our most Shakespearian Captain, Patrick Stewart, who has joked his many decades as a star of the Royal Shakespeare Company was merely the training ground for the final acting frontier, has his own theories on the subject of these two great cultural tastes that taste great together.

When asked in an interview (with Ian McKellan!) how his Shakespearian training helped him in his outer space adventures, he had two quick and clear answers.

The other advantage came in the well reported bane of many a sci-fi actor’s life: delivering incomprehensible technobabble: “Star Trek dialogue is somewhat heightened dialogue and Shakespeare’s dialogue and language was heightened too. Some of it in verse, some not.”

When delivering heightened language, be it archaic poetry or astromech shield capacity, understanding exactly what your lines actually mean matters less than how you say it—what emotion is behind the line, what rhythm and stress is suggested by the syllables and meters of the lines.

Stewart may have the most notable Shakespearian bona fides, but many of the actors who have played Captains and crew across the franchise’s many iterations have theatre backgrounds and did their time treading the boards with the Bard, including William Shatner and Avery Brooks.

From the 1990 production. Andre Braugher as Iago and Avery Brooks as Othello. Photo by Joan Marcus. #STClunch pic.twitter.com/8nWJwGxvwj

With those practical answers out of the way, we can move on to those more esoteric and abstract ideas. That’s one of the many commonalities that Shakespeare and Star Trek share —an appreciation for the melding of the sacred and mundane. There is always time for a comedic bit—be it a romp through a fairy forest or a holodeck adventure gone wrong—and there’s always space to explore some weird sex stuff, but in between those two tent poles, we’re looking at the big questions: What makes a man? What makes a good leader or a good king? How do we justify our actions in politics and war? How should one act? How should one live? Should one live at all?

Shakespeare and Star Trek not only ask similar questions, but they explore similar answers. Both bodies of work invest in powerful themes of humanism. Humanism can mean many things, but in the literary context it describes a fascination with, and a desire to explore the limits of, humanity and human nature. There also tends to be, in humanist works,  the comforting undercurrent that humans are essentially, deep down, ok.

Neither Star Trek nor Shakespeare shy away from people’s ability to do great harm and evil, but insist that the complexity of humans, our infinite capability as individuals and collectives to do good things or bad things at the behest only of our own choices, is what makes the good things we choose to do so remarkable and sublime.

Oh, I know Hamlet. And what he might say with irony, I say with conviction: “What a piece of work is man! How noble in reason! How infinite in faculty! In form, in moving, how express and admirable! In action, how like an angel! In apprehension, how like a god!”

If that all evil requires is for good men to do nothing, then when good men do good, evil can never triumph.

Shakespeare wrote many tragedies, but there is no play of his where evil wins outright. Even when our heroes die, their heroic actions, or the heroic actions of those around them, ensure that evil does not go unpunished, and there is hope for a better tomorrow.

Likewise, no matter how dark and gritty new incarnations of Star Trek get, as long as our heroes commit to living up to the ideals of the Federation there is no genocidal time traveling robot they can’t defeat.

Of course, in Star Trek, any discussion of humanism is complicated by the fact that some characters are not humans at all but aliens, androids, or sentient space clouds with god-like capabilities. However, as Kirk discovers in The Undiscovered Country;

Kirk : Spock, you want to know something? Everybody’s human.

Spock: I find that remark … insulting.

The realization that Kirk is trying to convey (in typical human-centric language, which Spock objects too) is that the traits we associate with “humanity”—compassion, curiosity, imagination, a rich and unknowable inner life—can be found in every being in the universe. That is one of the central tenets of Star Trek: anything you meet in the long expanse of the galaxy, be it a humanoid that is greener or pointier than average, or a shapeshifting bucket of goo, or a pile of rocks that are alive, has far more commonalities with you than differences, if you’d care to find them.

Shakespeare, too, wrote about the similarities tying us to those we may view as the other. It is Shakespeare that Data, a character who often had to fight to prove his autonomy and humanity, paraphrases when he asks, “If you prick me, do I not leak?”

The themes that humanism explores are very compelling. We are generally all in favor of equality between individuals, just and fair leadership, compassion and empathy between cultures and planets. Art that not only advocates in favor of these ideals, that argues that they are not only necessary but achievable—if only one person, one choice at a time—is art that tends to build its home in our hearts, art that people return to again and again, with great passion and more than a little mania.

Shakespeare and Star Trek both have very devoted fans—lifelong fans who return again and again to these works finding reward in the complexity, the warmth, the dick jokes, and the shoddy special effects.

Whatever the explanation, the relationship between Shakespeare and Star Trek is a fruitful partnership that has successfully  gone on for many decades. May it live long and prosper for many more. 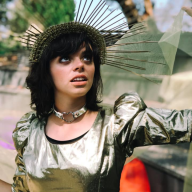 Bonnie is a writer and journalist who lives in Tasmania, a tiny island at the bottom of the world. She has a BA in Ancient History, History, and Linguistics, a Master’s in Journalism, Media, and Communications, and a life long obsession with whales that can be traced back to <em.StarTrek IV: The Voyage Home.