A New Star Trek Spin-Off Will Follow Spock, Captain Pike, and Number One 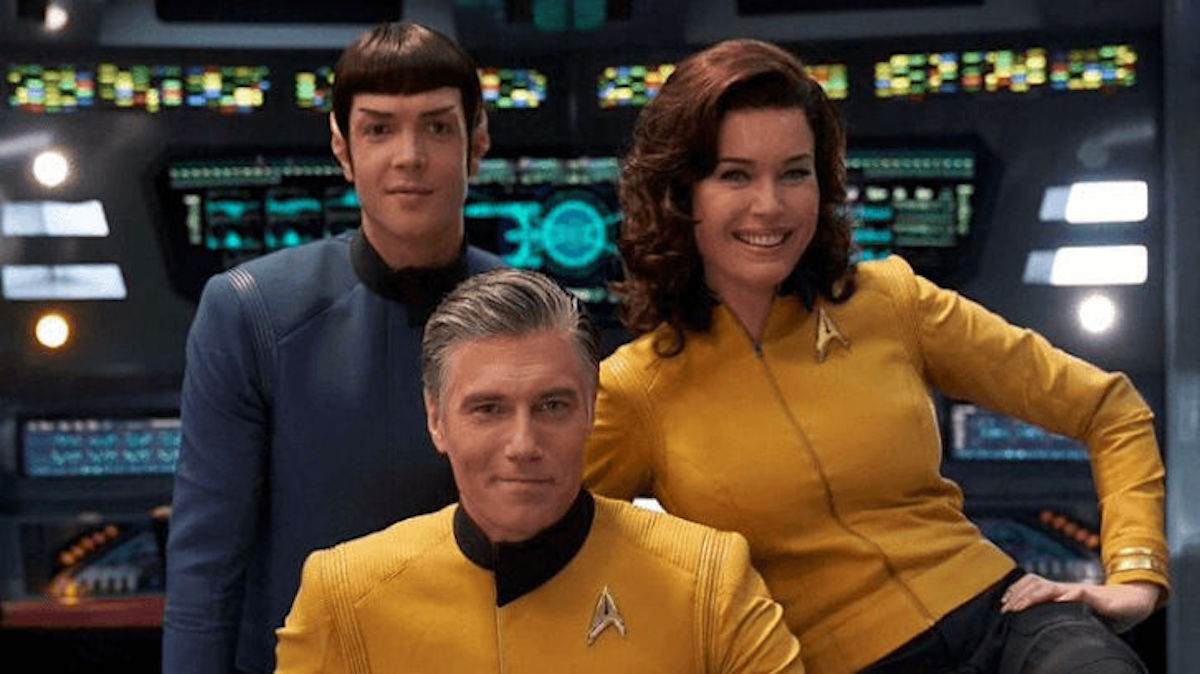 As io9 points out, the announcement came via a cute, upbeat video that features Mount, Peck, and Romijn joint sharing the news about Strange New Worlds from quarantine. “You asked, we listened, it’s happening,” Peck says. “So glad I finally get to share this news with you guys,” says Romijn. “Speaking just for myself, I have never received more love from a fanbase than I have from the Star Trek family,” says Mount. “Without you,” Peck continues, “this wouldn’t be happening.”

It’s true that fans’ enthusiasm for these classic Trek characters, who played a large part in Discovery’s second season, is both historical and carried over into their modern incarnations. Some of us (myself included) were dubious about them joining up when first announced, but both Peck and Mount did an admirable job filling some pretty big canonical shoes (Romijn’s still-unnamed character got more time to shine by the end). In retrospect, much of Discovery’s season 2 finale was acting as a bit of a backdoor pilot for Strange New Worlds, or at least a testing-ground.

While I was not impressed by the messy, over-the-top finale of Discovery, at the time, I wrote:

The last scenes, a nostalgia-fest in which we see a fresh-shaven Spock in that iconic blue uniform taking his place at the science station on board the Enterprise, were pretty great if we were watching a rebooted show about Pike’s Enterprise. But the total shift in focus away from what had become of Discovery felt disorienting. I’d be totally down to watch this series with Captain Pike and Spock and maybe the hotshot young James Kirk they pick up along the way. As for Discovery, I have no idea where we’re going, or when, or why.

Well, it seems we really will be getting that rebooted show about Pike’s Enterprise. Notably, in the announcement video, Peck says, “The ethos of Star Trek is so curious, and welcoming, and unifying,” and Mount follows that up with, “And we’re gonna get to work on a classic Star Trek show that deals with optimism and the future.”

This feels like, not quite a dig, but perhaps a response to some fans’ consternation that the tones of both Discovery and Picard are much darker than creator Gene Roddenberry’s stated intent for a more utopian future, where many of our Earthly concerns and divisions have been overcome. I think there’s space (sorry) for all kinds of themes within a Star Trek show, as many of the past series have demonstrated, but if Strange New Worlds really will be more “classic Trek,” I’m cautiously excited.

The title refers, of course, to William Shatner’s famous voice-over as James T. Kirk on the original series: “Space: the final frontier. These are the voyages of the starship Enterprise. Its five-year mission: to explore strange new worlds. To seek out new life and new civilizations. To boldly go where no man has gone before!”

Exploring strange new worlds, and a constant sense of encountering the new sights, was something I wanted for Discovery, but that show got bogged down by massive war in the first season and a time-travel tangle in the second. Picard had an arc it wanted to tell and didn’t get to explore very much, though the fun scenes in an episode like “Star Dust Rag City” prove that we still really love to see characters beaming down into the unknown.

So I’ll say I’m optimistic about the concept of Strange New Worlds, and I like their base cast thus far a lot. It’ll be interesting to see who they add to fill out the crew, and how much of the storylines, characters, and “new life” will be based on classic canon, or if they’ll go their own way. Will we be hearing from other Discovery folks left behind, like head of Section 31 Ash Tyler? (And what happened to that Section 31 spin-off, which was to feature Michelle Yeoh?) I’m also intrigued to see how technology will be represented in this old/new universe, with 1960s inspiration and 2020s special effects.

My caution remains because I haven’t been thrilled with the writing and creative decisions made on both Discovery and Picard, and Strange New Worlds, no matter its mission, is likely to have some of the same guiding hands behind the scenes. Even so, this is fun news to receive in quarantine, and it’s nice to share in this crew’s enthusiasm. We’ll take our distractions where we can get ’em.