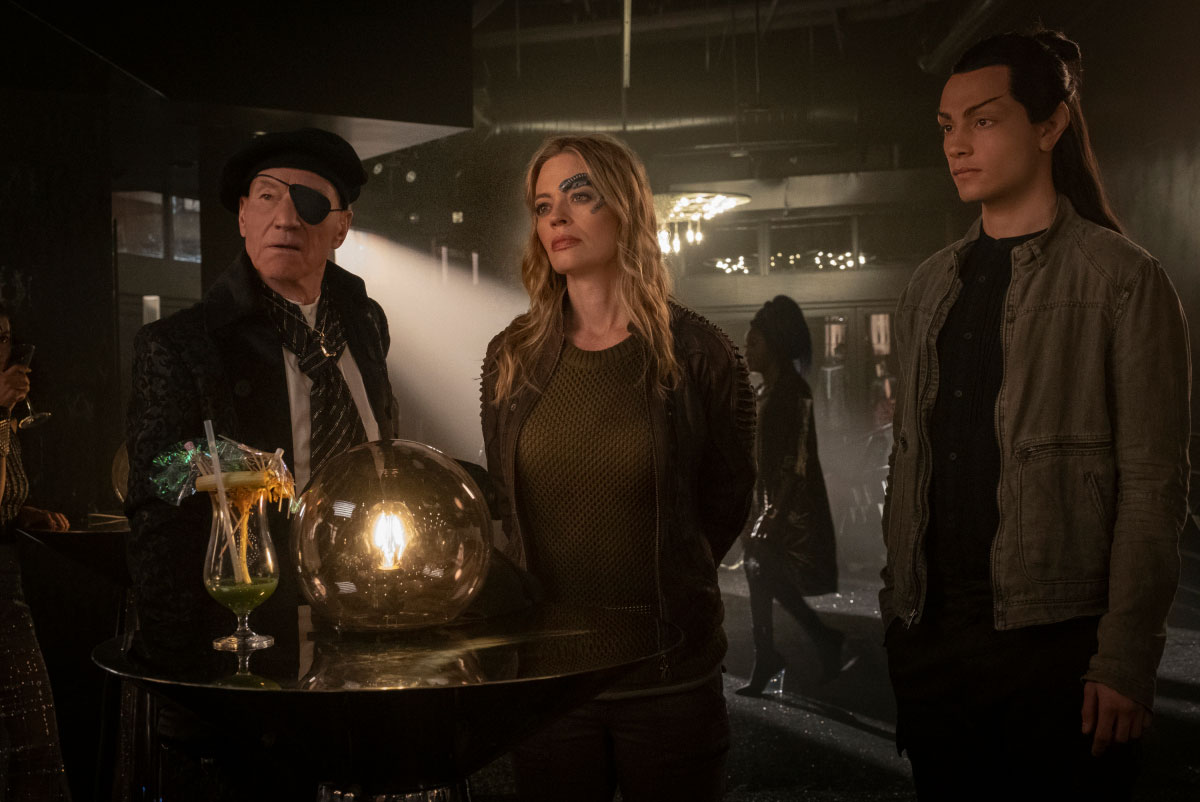 At the end of Star Trek: Picard’s season finale, “Et in Arcadia Ego, Part 2,” the crew is regrouping after the events of the episode when we get our first real Picardian “queer moment.” I thought the episode was pretty good, all things considered, with a weird, cerebral, and sad end that made me wish the show had gone more in that direction in the first place. Much of the finale felt like a big-budget action movie, and much of it felt more like Star Wars, and much of it was predictable, but in the end, I had stronger Star Trek feelings than I felt all season.

And as the camera panned across Picard’s new crew at the close, there was a blink-and-you-might-miss-it set up that suggested Seven of Nine (Jeri Ryan) and Raffi (Michelle Hurd) will be romantically attached in season two. As they gazed into each other’s eyes across a table, the two characters held hands. This is important on a number of levels.

It’s become exhausting to write about “queer moments” that can be easily missed by audiences that aren’t primed to look for them, or can be easily cut for certain markets. Vaguely “queer moments” rather than overt assertions of queerness are a trend we’re seeing in big movies these days—even as studios promise to do better in terms of representation.

But TV has more latitude, and the new realm of CBS Star Treks finally gave us the long-desired queer Trek major character in Anthony Rapp’s Stamets on Discovery (even if they handled this poorly at points). I’m more confident that if Seven of Nine’s queerness is a part of season 2, the show will let her have more than passing moments. That Seven is a legacy Trek character who has a history with fans makes this representation all the more poignant.

Seven of Nine is a popular, iconic Star Trek character who was a game-changing addition at the end of Voyager’s third season. She’s also been included in fanmade queer narratives and speculation for decades—many shipped her with Captain Kathryn Janeway, for example, with whom she had a complex relationship.

Voyager producer Jeri Taylor wanted Seven to be a lesbian back in the ’90s Voyager years, but that idea was nixed due to “opposition.” So it feels doubly satisfying to find Seven represented as queer in 2020. As Digital Spy wrote of the matter, Picard “finally fixed an old Star Trek mistake.” They declared that the character “who was denied her identity for years finally got the ending she deserved.” That remains to be seen, but I think that it’s at least a start.

Queerty spoke with Picard showrunner Michael Chabon before the season’s final episode aired, in an interview that touched upon characters’ sexuality and Chabon’s desire to portray the fluidity he believes would be more standard in the future. Chabon acknowledged the hints throughout the season that Seven and Raffi were fluid in their sexuality, and explained his thought process:

You know, when we talked about our characters and their sexualities I think the assumption was that if we’re talking about the Star Trek vision of the future, which is rooted in diversity and tolerance and openness and freedom, inevitably that would lead to total freedom to be who you are. One of the things I see looking around at people who are in their teens and 20s, is people exploring their identities and trying to figure out who they are in terms of their gender and sexual identity.

As for Seven, Chabon observes that she’s “having to catch up after such a long absence from the human race. If you think about that, it almost seems unnatural that she wouldn’t have had partners of other genders. It seems clear she would have. So even if we didn’t see that on Voyager, years have passed. In that time, she’s continued to explore the spectrum of human relationships in a broader way. So in our show, there are echos and implications of that.”

For Raffi, “With a character like Raffi, to the extent we imagined her history in a fair amount of detail, her history included all kinds of sexual partners. There’s a father of her child, but that was far from her only sexual or life partner. She’s had relationships with all kinds of people. If it was ever to come up, it was always going to be organic.”

The interview with Chabon is fascinating and well worth the read, as he seems to grasp the importance of representation and worries that his own privilege got in the way of making certain topics unambiguous this season on Picard. He’s trying to walk a line between showing us a futuristic culture where elements like sexuality and race do not play out as they do in our own world, and the need to show our own world a more clearly spelled out vision of this utopia.

Just because queerness may not be a thing that’s commented upon or significant in Picard’s time doesn’t mean it shouldn’t be elucidated for ours. And it’s as exhausting as “queer moments” to have sexuality be treated as a sort of spoiler—teased and winked at rather given the same forthrightness that the show’s heterosexual pairings receive.

I would have far preferred if Picard had better laid the groundwork for this. Fans picked up on the tension between Seven and “criminal businesswoman” Bijazyl in the episode “Stardust City Rag,” with subtext suggesting they had once been involved. Raffi calls an old lady friend at Starfleet with whom she seems to have a deeply felt history. Why not simply say out loud that these relationships were romantic rather than dance around it?

“Representation is important to me as a principle that I support, but not as one of life and death,” Chabon told Queerty, acknowledging his privilege. “Because of that I need to make more of an effort to make it as if it were life and death to me.”

Chabon’s apparent awareness makes me hopeful that we’ll see far more explicitly stated and demonstrated queer relationships in season 2. Picard, on the whole, hasn’t been a show with much time for romance: there’s the gross way Narek manipulates Soji, and the not exactly convincing pairing of Rios and Dr. Jurati. It would be nice if in season 2 we see a lot more emphasis on character-building overall, and with it the development of multi-layered romantic plotlines. The truth is we still know little about both the current-day Seven and Raffi and their lives post-serving on Federation starships.

If I have one real quibble with the Seven/Raffi moment, it’s that these characters have hardly interacted onscreen. I think this would have been much more satisfying had there been more rapport, or, erm, significant words exchanged between them. But to give Picard the benefit of the doubt, what we saw was briefly drawing back the curtain on a private moment. Maybe we’ll learn a lot more about how they came to be behind the scenes and how they’re facing the future together in season 2. We should learn that.

And as for Seven of Nine herself? She’s showing solidarity.