There have been Star Trek fan films for decades without any trouble. So, why is CBS/Paramount suddenly issuing really strict guidelines for fan films now? Because one entitled fan effort ruined it for everyone. That effort is called Axanar.

First things first, fan art of all kinds is awesome. Regardless of its quality, stuff like fan fiction, cosplay, geek music (‘sup Chameleon Circuit!), and fan films are amazing, because they allow fans to express their deep love of a story or character while also exercising their creativity muscles. Win-win. You don’t have to be a lawyer to understand that, as a fan, the property that you’re using to create new art does not belong to you. Which is generally fine, unless you’re trying to profit from it in some way. Otherwise, most studios don’t care about, and even encourage fan art, because it’s basically free marketing.

The crowdfunded Star Trek feature-length fan film Axanar started life as a short called Prelude to Axanar, which looks freaking incredible and managed to wrangle a top-notch cast including folks like Richard Hatch, Gary Graham, and BSG’s . They then used that short to raise money for a feature-length Axanar film. So far, so good. You’re allowed to raise money for the thing you’re creating, as long as you’re not profiting from it financially in any way. The team behind Axanar seemed to understand this during their second crowdfund at IndieGoGo:

You may have heard about CBS/Paramount subsequently suing the Axanar team, led by Executive Producer Alec Peters, over the film. As fans, you may have started to feel righteous outrage over it. However, there are some things to think about. According to Chris Murray at The Ego Factor, “rather than, “hey bud. Sorry about that. My bad,” Peters countersued CBS trying to allege that among other things, they didn’t own the copyright to Vulcan ears. This lawsuit by the way, was also paid for using funds from the original crowdsourcing.”

What’s more, “Fans who had paid for a new Star Trek film, were instead paying for a new studio, Peters wages (some $30-40k per annum if I recall, but don’t quote me), and the frivolous lawsuit he winged at CBS to divert attention from the fact that he’d [allegedly] broken the law.”

Here’s the thing, paying oneself as part of a production is standard. If you’re working on a film or show, you should be paid for your work, and that’s built into the budget. Getting a producer fee, a director fee, or a crew/actor fee is totally within the realm of appropriate. But a yearly salary? For a fan film that you’re supposedly doing “on the side” while you live the rest of your life because you’re not an actual employee of Star Trek, CBS, or Paramount so clearly you must have another job?

You may notice in the IndieGoGo video above, when talking about the sound stage that they built for Axanar, that Peters says they’ve “been retrofitting this facility so that it can be a soundstage that we use for years to come.” Years to come? That’s not Axanar, then. So, this crowdfunded money is also supporting future projects? Which ones? Will you be making money on those? Are you using a slick Star Trek film as a lure to get people to fund your production company? Why didn’t you just, I don’t know, crowdfund your production company? People totally do that and are, you know, honest about it! Meanwhile, their crowdfunding campaigns claim to be “all about transparency.”

Instead, the Axanar team has relied on a teesny-weensy fans vs the Big Bad Corporation narrative to deflect from the fact that they may have, I don’t know, fucked up, and they’ve managed to convince J.J. Abrams and Justin Lin of that narrative, too. Though honestly, I’m sure that Abrams and Lin are more interested in heading-off possible fan resentment of the franchise with Star Trek Beyond on the horizon than they are in protecting a questionable fan effort. 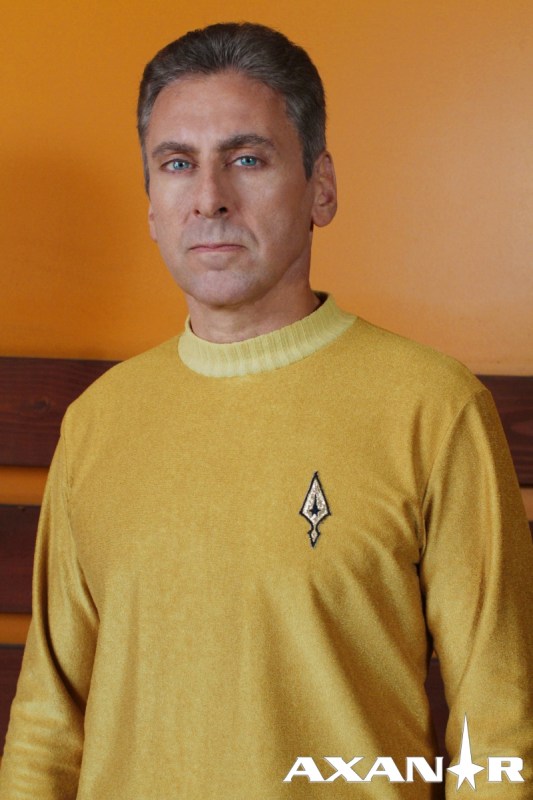 But this isn’t a case of “David and Goliath,” it’s a case of “Goliath and Goliath,” except one of the Goliaths is pissed off that they can’t get paid. Peters and Co. have yet to address the specifics of why a lawsuit was brought against them in the first place, and have made no move to explain their use of the crowdfunded money in detail except where it concerns “the production.” Another reason I’m not crying for them, Argentina? They’re making this film with not only professional, established actors, but professional, established crew, many of whom have experience working on Star Trek. If you want me to buy that you’re this widdle-biddy fan effort, perhaps I shouldn’t be seeing the fact that you apparently have access to a certain level of talent in Hollywood somehow. At a certain point, that’s not showing off “fan creativity,” that’s a fan hiring professionals to create the illusion of creativity. I’m sure the script Peters wrote is great, but a script alone does not a “fan film” make, and if you’re using ringers to make your film…what’s the cut-off for an actual fan effort?

Now, the lawsuit may indeed be coming to an end, but in order to teach the Anaxar team a lesson, as well as to remind fans that just because they love a thing doesn’t mean they’re entitled to use it however they want if they didn’t make it, CBS/Paramount released a series of guidelines for Star Trek fan films intended to, according to their official release, “support this innovation and encourage celebrations of this beloved cultural phenomenon” while also protecting Star Trek as an intellectual property. They are:

The fan production must be less than 15 minutes for a single self-contained story, or no more than 2 segments, episodes or parts, not to exceed 30 minutes total, with no additional seasons, episodes, parts, sequels or remakes.

The title of the fan production or any parts cannot include the name Star Trek. However, the title must contain a subtitle with the phrase: “A STAR TREK FAN PRODUCTION” in plain typeface. The fan production cannot use the term “official” in either its title or subtitle or in any marketing, promotions or social media for the fan production.

If the fan production uses commercially-available Star Trek uniforms, accessories, toys and props, these items must be official merchandise and not bootleg items or imitations of such commercially available products.

The fan production must be a real “fan” production, i.e., creators, actors and all other participants must be amateurs, cannot be compensated for their services, and cannot be currently or previously employed on any Star Trek series, films, production of DVDs or with any of CBS or Paramount Pictures’ licensees.

The fan production must be non-commercial:

The fan production must be family friendly and suitable for public presentation. Videos must not include profanity, nudity, obscenity, pornography, depictions of drugs, alcohol, tobacco, or any harmful or illegal activity, or any material that is offensive, fraudulent, defamatory, libelous, disparaging, sexually explicit, threatening, hateful, or any other inappropriate content. The content of the fan production cannot violate any individual’s right of privacy.

“Star Trek and all related marks, logos and characters are solely owned by CBS Studios Inc. This fan production is not endorsed by, sponsored by, nor affiliated with CBS, Paramount Pictures, or any other Star Trek franchise, and is a non-commercial fan-made film intended for recreational use. No commercial exhibition or distribution is permitted. No alleged independent rights will be asserted against CBS or Paramount Pictures.”

Creators of fan productions must not seek to register their works, nor any elements of the works, under copyright or trademark law.

Fan productions cannot create or imply any association or endorsement by CBS or Paramount Pictures.

Simple, easy-to-understand fan guidelines like this are long overdue, and it won’t be long before other studios follow suit, I’m sure. Of all the guidelines here, the one that hurts the most is that no professionals can be involved. While I raise the point above that, if you’re using a significant number of professionals in your production it ceases to be a “fan” effort, there’s also something to be said for the fact that professionals can also be fans, and it can be cool for someone like Gary Graham or Richard Hatch to play in an independent sandbox every now and again. To deny them that opportunity seems cruel. Perhaps they should rethink this to something like “no more than three roles/positions can be taken up by a professional,” or something.

The time limit is also a bummer. Then again, if you can only raise $50,000 to make the project (which isn’t exactly chump change), that’s about as far as that amount will take you if you don’t want it to look like total garbage. And this also doesn’t stop people from creating different Star Trek fan fictions. It just means that one story can’t be longer than half an hour. So stories have to be more self-contained? So what? Anthology series are all the rage these days anyway!

All the other guidelines, I get, despite Team Axanar calling them “draconian.” No, you can’t make your own merch to sell. That’s profiting off someone else’s property, even if the merch you’re selling has an originally designed logo on it. No, you can’t make your own version of a thing that’s already commercially available. These things make sense, because Star Trek, and everything associated with it, belongs to someone (in this case, a company of someones). You don’t show something how much you “love” it by stealing from it. That’s like showing your neighbors you love them by robbing their house and selling the stuff they bought at the mall on your lawn in a garage sale. Then getting mad at your neighbor for pressing charges, because that’s how you show love.

I’m a fan, and I’m a creator. And as a fan who wants to someday create something worthy of fan love, I understand that these guidelines are important. And as a future creator who’s also a fan, I understand that true fan creativity has nothing to do with “screen accuracy” or being able to use a logo. The best creativity comes from finding the workarounds and coming up with less expensive alternatives, not throwing money at the screen and demanding the use of certain things.

To draw a parallel to another major franchise, the reason why Star Wars was so good was that George Lucas, as a relatively new filmmaker, was constantly being told no. He had a smaller budget than he would’ve liked. He had to come up with alternatives. And it started a decades-old franchise!

(via The Daily Dot, images via CBS/Paramount and the Anaxar website)