'Star Trek Discovery' Is Stuck in the Mud | The Mary Sue 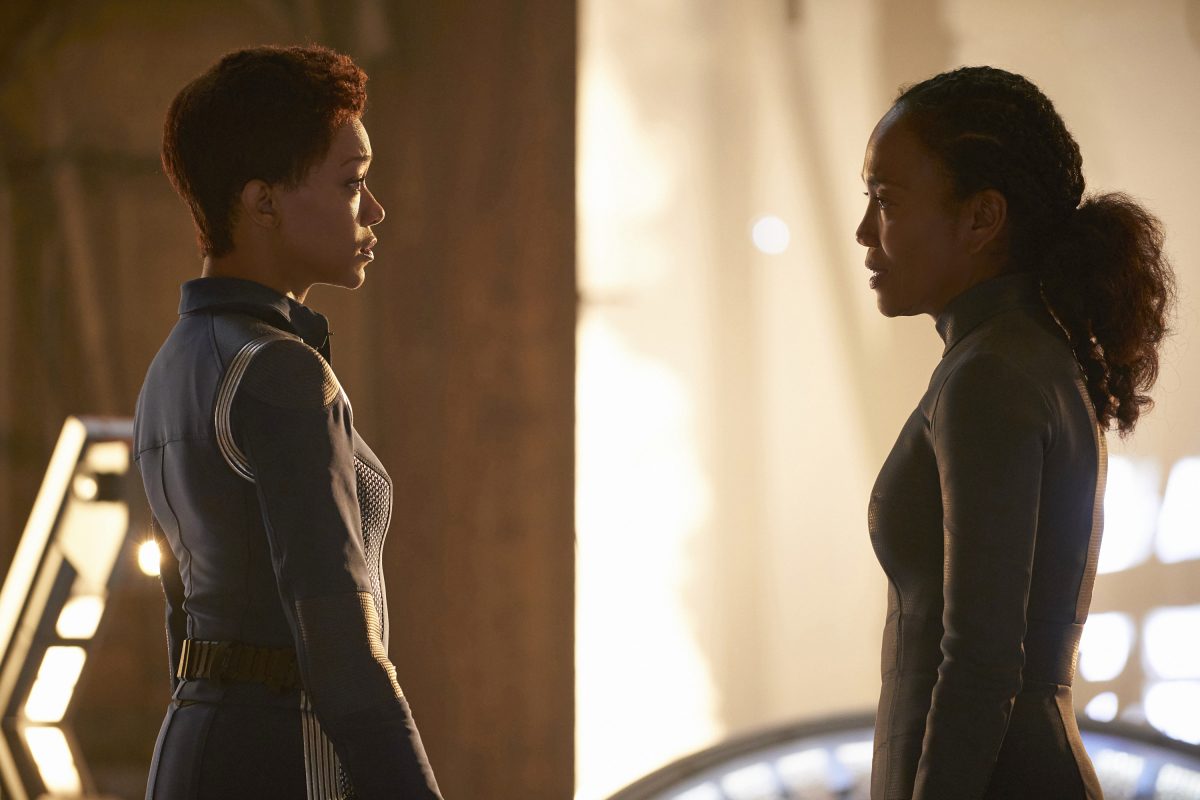 After promising us a new season that felt more “Trekian,” Star Trek: Discovery seems to be falling into its old habits, getting bogged down by a tangled bombastic narrative arc that is profoundly less interesting than its characters.

There have been some good, even great, episodes of Star Trek: Discovery this season. When “Point of Light” arrived at episode three, I wrote that the show was finally hitting its stride, becoming the kind of Star Trek I love to watch. But we’re now past episode eleven, “Perpetual Infinity,” and I’m feeling the same fatigue from the season’s driving plotline that the tiresome Federation/Klingon war invoked in season one.

Discovery’s continued problem is its relentless focus on a big looming Bad Guy or conflict rather than just letting our crew explore the universe on the Federation’s flagship science vessel and get to know each other. The Red Angel stuff was head-tilting enough, but now we’re focused on Control, a malign Artificial Intelligence who plans to do no less than destroy all sentient life in the galaxy for, I don’t know, reasons. Even Thanos had a better and more convincing plan here.

There doesn’t seem to be any real heft to the Control plot because a) the stakes are so ridiculously inflated b) we know it won’t succeed because life goes on and Spock will one day meet Kirk and fall in love. This week, when Control infected Leland with its definitely-not-the-Borg nanotech (somehow binding him to a chair first without a corporeal form—neat trick!), I started laughing. “This is some dated supervillain BS,” I told the cat, as Leland’s eyes turned black and veins bulged. The cat didn’t care about Control either.

The events of “Perpetual Infinity,” with its choreographed hand-to-hand combat and “percentage of data upload” countdown clock felt better suited to the over-the-top theatrics of a movie, not a thing to be squeezed into one 40 minute episode. Especially since—as always is the case on Discovery, though its creatives never seem to learn—the best moments are in heartfelt face-to-face interactions and character development.

Quiet speech, nothing exploding, no one spouting technobabble at breakneck, incomprehensible speed. Give us more of this. Guest star Sonja Sohn was terrific as Michael’s tragically lost-to-time-travel mother Dr. Gabrielle Burnham, and every time Sohn was onscreen, with any character, the episode was electric. But of course Sohn was packed up—erm, sucked up—by episode’s end, because nothing good is allowed to last on this show.

Here’s what else worked for me this week. Sonequa Martin-Green is compelling to watch, and Michael’s distress over discovering that her mother is alive, in a manner of speaking, and has spent twenty years trapped in time, was moving. This is Michael’s least-Vulcan episode, as she’s wonderfully emotional, stubborn, and vulnerable. The parts where Michael reviewed her mother’s logs through time were quite effective.

I’m also pleasantly surprised by the evolution of Spock and the touching new equilibrium of his relationship with Michael. I can close my eyes sometimes on Ethan Peck’s performance and hear echoes of Leonard Nimoy, and that’s the most profound compliment I’m capable of bestowing. And Michelle Yeoh is so delicious in every moment that she embodies the ambiguously motivated Philipa Georgiou that I wish we would just skip to her spin-off already and have done. 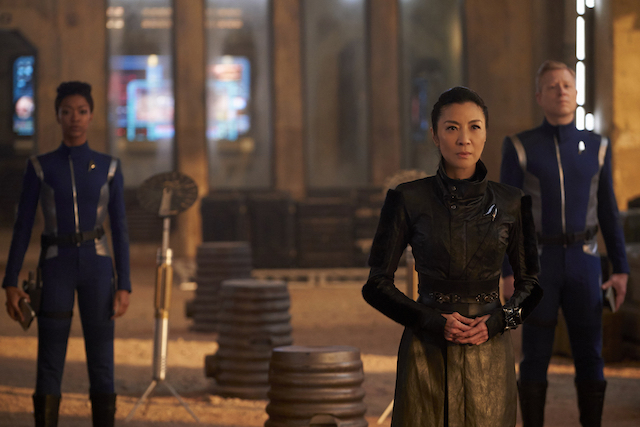 Here’s what did not work for me this week. Star Trek, as a franchise, has always had its fair share of technobabble, and some characters who can deliver it flawlessly, like LeVar Burton’s Geordi LaForge. But Discovery throws out huge, life-altering babble-laden concepts and “scientific” expository solutions in lightning rounds, leaving us trailing along wondering what the hell is even happening. The number of times as of late I have not understood what is occurring onscreen or why it is occurring is … not a fun thing to write home about. Slow it down, guys. This isn’t a race.

Further, Discovery wants to be perceived as deep without doing the legwork to get there. It trots out myriad lines from authors, physicists, and philosophers, as though we’re supposed to be impressed that they have a Bartlett’s Quotations in the writers’ room. Interestingly, these primarily alien people living centuries in the future only seem to spout the wisdom of Earth’s most famous names. If there’s another reference to Alice in Wonderland I will knock someone’s head off with a croquet mallet. Perhaps the worst exchange in “Perpetual Infinity” or in any Star Trek ever was Spock quoting Shakespeare’s Hamlet to Michael as … motivation? And Michael’s cringe-inducing response as she beams away: “Hamlet. Hell, yeah.”

Unfortunately, this attempted cribbing from others for emotional depth extends in the show’s frequent throwbacks to great moments of Star Trek past. While sometimes this can work well—the Airiam-is-infected episode was pretty good, all things told, and her later formal sendoff in a space coffin while Spock looked on, not knowing he was glimpsing his own future, got the desired effect.

But Michael and her mother pressing their hands against the forcefield that separated them, trying to borrow gravitas from the most famous moment in Star Trek history, was unearned and unnecessary. It was bad enough when the Star Trek reboot movies tried it. We care about Michael and Dr. Burnham, but we’ve only known about their relationship for half an hour. They do not get to Kirk and dying Spock this thing.

I’m not sure why Discovery feels the need to be guided almost entirely by a giant mystery or villain, to the exclusion of the character-building and other worlds-building it is still in desperate need of. We don’t think about Voyager and say, “Wow, you know, my big takeaway from this is that they fought the Borg” or look at Deep Space Nine and say, “What this show needed was more arcs about the war with the Dominion.” Star Trek is only ever as strong as its strongest characters, not their greater conflicts.

On Discovery, we now know more about Airiam, a minor bridge crew member heavily featured in one episode and now dead, than we do about the backgrounds of Stamets, Tilly, Tyler, Culber, Pike et al. Discovery needs to stop leaning so heavily on overly complicated, cinematic nonsense and let us discover who’s really piloting this ship.