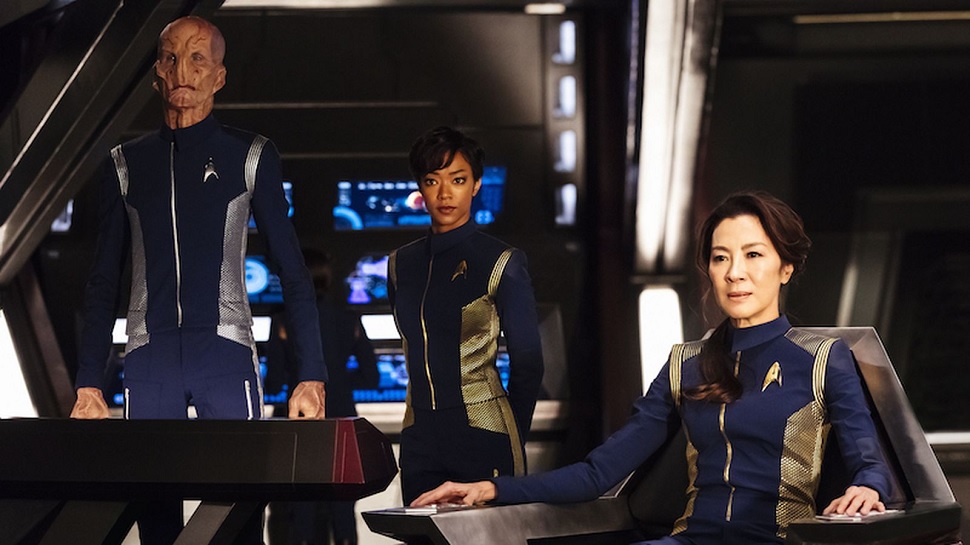 The Daily Dot recently spoke to Gersha Phillips, the lead costume designer on Star Trek: Discovery, about her inspirations for the show’s costumes. Phillips took over the post from Suttira Larlarb, who’d worked on earlier iterations of the show’s costumes with former showrunner Bryan Fuller.

“When I took over,” Phillips said, “our mandate was to do something that felt real. There was a lot of talk of looking at Ripley from Alien. This idea of grounding something in reality, and still honest to the Starfleet look and feel.”

As a result of this emphasis on practicality, the Starfleet officers have tactical breastplates. “The idea was it had some lifesaving capacity,” Phillips explained. “It would be bulletproof, blade-proof—depending on what the blade was made of, obviously. They would have smart technology. So the compression panels, which are the lines on the shoulders and that go down the body, have body-monitoring components. It would also have some sort of life-protection qualities. What that was, we never really figured out, but that was the idea behind adding those elements to the costumes.”

While Discovery is obviously set in the future, sometimes Phillips has to turn to contemporary designers to capture that “futuristic” look. “We have 10 days to prep an episode, and we may know about something a little bit in advance, but it’s not always enough time to develop a whole new set of costumes,” Phillips said. “So for that, there’s some really interesting designers that are designing things that are a little more advanced and have a bit of a futuristic take on them.”

And who are those designers? Oftentimes, they’re sportswear companies like Lululemon or Nike. “There’s a certain kind of seaming and construction technique that I look for, that I feel signifies the future,” she said. “The fabric choices, things like that. I feel like a lot of sportswear brands like Adidas, Nike, Y-3, Lululemon, these brands are all doing really interesting things with construction … And I actually stole building techniques from them, for building other things. It’s really interesting, you know, the bonding, which is my favorite thing about Lululemon, where they’re bonding everything as opposed to sewing.”

For the Klingons, on the other hand, Phillips wanted to emphasize their alien-ness. “I think the main thing is to create a species that doesn’t have so many human components,” she said, “as opposed to how they were in other iterations of Star Trek. Trying to camouflage as much of the human body as possible.”

“The other thing we were trying to do in the beginning was: What does a klingon body look like?” she continued. “The idea that they have double organs. So we sort of expanded the body and extended the breastbone, so it looked like there was two of everything there. Just to make it less human-like, that was the mandate for the whole aesthetic on this one.”

The Vulcans, meanwhile, were inspired by designer Alexander McQueen. “Bryan’s mandate for that, he just wanted them to be really beautiful and elegant. He loves Alexander McQueen, so that’s where I started, with the shoulders and the collars.”

Lastly, The Daily Dot asked Phillips about some of her favorite costumes from previous series in the Star Trek franchise.

“There’s such a wealth of costumes to choose from,” she said. “I think Jeri Ryan’s Seven of Nine costume is fabulous, I was looking at that the other day and thinking how cool that was. Actually, the picture we have up in our office … we used it as ‘What not to do,’ but I actually really love it. I think they’re from The Wrath of Khan or the original movie. Like the mauve-colored, two-piece … it’s quite a funny picture, but I kind of love it, just in terms of fashion I think it’s great.”

“When you think of TOS [the original series] … I still think they’re great costumes, I just don’t think they resonate anymore, and they don’t resonate in 2259. But definitely they were great in 1960, if you know what I mean? I also love the Enterprise jumpsuit. I know a lot of people don’t like it, but I just find them really real and grounded in reality. You know, the idea that the Enterprise and Starfleet is an exploratory business, I like the idea that they wear almost like a naval uniform or a NASA uniform.”

“It’s tricky,” she said, “because it’s always trying to blend the futuristic with the practical, so that it feels real.”