Welcome to the 21st century, Doctor. 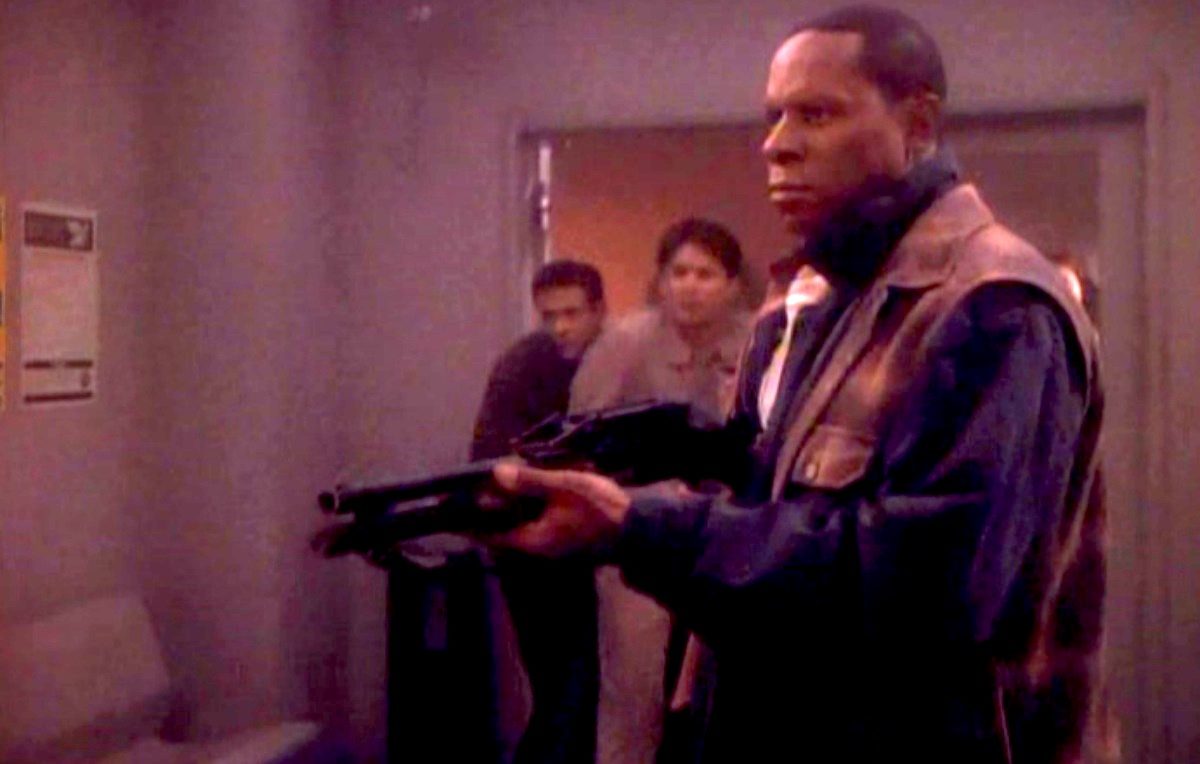 Almost every morning, I look at the news, and it becomes clear we are living in the darkest timeline. One of the few good things that have come into my life this summer (besides Craig of the Creek) is my slow adventure through Star Trek: Deep Space Nine. Not only is the show as amazing as everyone has told me, but it has so much heart, compassion, and hope for humanity that it makes me feel safe. However, there are also episodes like seasons three’s two-part “Past Tense” that are too eerily on the nose as to what we are going through at the moment in the real world.

At the beginning of the episode, Benjamin Sisko, Doctor Bashir, Lieutenant Dax, Major Kira, and O’Brien are in Earth’s orbit enjoying the sight of their 24th century utopia. Dax, Sisko, and Bashir go to beam down to San Franciso, but because it’s Star Trek, something goes wrong. Instead of landing in their time, they find themselves in 2024 San Francisco Sanctuary District, and it’s a mess.

In the 21st Century, Europe is falling apart, with student protestors in France and other places, and people all across America in Sanctuary Districts that are filled with murder, illness, and corruption. Sisko explains to Bashir, and the audience, that in the early 2020s (Jesus, that’s literally next year) Sanctuary Districts are every major city throughout the United States of America. The people in these Districts are not criminals, since people with criminal records are not allowed in the sanctuaries; they’re simply people without jobs or places to live, who end up turning to crime because of a lack of resources.

Sisko explains that the date they have arrived in is right on time for the Bell Riots, one of the most violent civil uprisings in American history, that resulted in the deaths of hundreds of Sanctuary District residents. There is a ray of light in this situation, because of one man, a Black man named Gabriel Bell, who risks his life to protect innocent people. His altruism and bravery become key in the future development of human history, so much so that when he is accidentally killed helping Sisko and Bashir (who got separated from Dax), Starfleet and the Federation get erased from the timeline. As a result, Sisko takes on the name of Gabriel Bell in order to make sure history comes to pass as it should.

Now, I’m not going to just review the entire two-part episode; it’s over ten years old (it aired in 1995), and I’m late to the party, but as I sat there watching it, I found it just chilling how our current sociopolitical climate has made things like this episode seem more … possible. 1995 wasn’t a utopia, but even when this episode aired, it was before the Oklahoma City bombing, our economy was doing well, and this was pre-Bill Clinton taking sexual advantage of a young woman. Something like this seemed out of the scope of modern-day reality.

But we live in the timeline where there are children in cages, and that has become a political issue. We live in an increasingly apathetic society, and the fact that 2020 is right around the corner makes it all that much more clear that America isn’t too far away from what’s in the episode.

At one point, Bashir says, “Causing people to suffer because you hate them … is terrible, but causing people to suffer because you have forgotten how to care … that’s really hard to understand.” It is, but it’s more and more common. We’ve allowed society and collective empathy to suffer because everyone is kind of an enemy. We don’t try to trust one another, and I don’t even mean from across the political spectrum; I mean from people we consider to be on our own side. All criticism is taken as scorched Earth, and frustrations about repeat offenders and those who have let us down are taken as cannibalism.

Plus, the rich and the elite will continue to thrive anyway. In the episode, Dax is also beamed down and gets separated from Sisko and Bashir. While she’s the only actual alien of the three, being a beautiful white woman, she gets rescued while the men of color get harassed and instantly criminalized. Dax meets a man named Chris Brynner, who runs a broadcasting company, and he lives a life totally detached from the realities of the people living in Districts. One of the great characters in this two-parter is Biddle Coleridge, or B.C.

When the story begins, B.C. comes off as just a typical over-the-top antagonist, almost Mad Max-ian in his violence, but when you remember that people who are criminals aren’t allowed in these districts, it becomes clear that this happened because of society. Society turned him into this mean, petty, violent person and then told him that’s what he was always going to be. He gets more moments of depth in the second episode, but the entire thing asks you to consider how the world forces people into violence.

Ira Behr, showrunner and executive producer of DS9, said that he was inspired to write this episode because of seeing the homelessness in Santa Monica. He says in Star Trek – Where No One Has Gone Before, “The future we extrapolated [in the episode] is very, very likely to happen in some form or another […] It was intended as a wake-up call.”

But the issue is … do people listen, or do they see humanity and America as so far beyond that kind of thing that they write it off as impossible? Bashir gets to be the voice of the writers asking the question, “It makes you wonder, doesn’t it? Are Humans really any different than Cardassians or… Romulans? If push comes to shove, if something disastrous happens to the Federation, if we are frightened enough, or desperate enough, how would we react? Would we stay true to our ideals or … would we just … stay here, right back where we started?”

We’d like to believe the answer is no, and that our trajectory is towards Starfleet, towards that utopia that is Earth in the 22nd Century when Star Trek began. That’s the goal we’re all supposed to be working towards, but that means working every day to fight for what we believe in and to not just admire those ideals in the future, but to live them now in the present.

The episode ends with Bashir and Sisko talking about the 21st century, our time, and Bashir: “How could they have let things get so bad?”

Sisko forlornly answers, “That’s a good question. I wish I had an answer.”

The reaction to this episode from some was that it was “too liberal” and “too preachy” (Greg, this is Star Trek). Behr spoke about this reaction from people, saying, “People are still even writing that we only presented ‘one side’ in ‘Past Tense’ and that we should have presented ‘both sides’ and not just the ‘liberal’ point of view—and I’m still trying to think what that means. In other words, we should have showed the positive aspects of putting the homeless into concentration camps? And I do admit we probably failed in that—we really did not show the many, many wonderful aspects of life without money and living in over-crowded camps.”

And the sad thing is … now that we live in a world where these conflicts are taking place in the mainstream, we know that is exactly what some people want—something to tell them that not caring is a good thing and fascism is the way to go.

*Sigh.* We’re never getting to Starfleet.