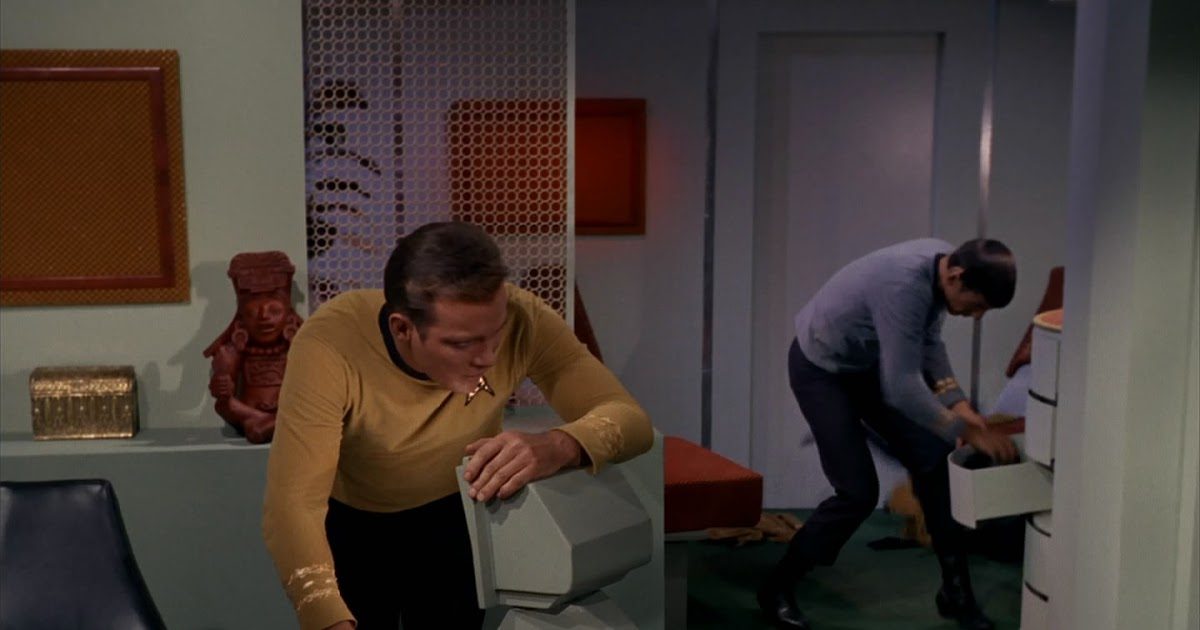 We’ve had several beloved Starfleet Captains, but how are they sleeping at night? Journey with me into the final frontier of Star Trek Captains’ quarters, and let’s see who had the sweetest floor plan.

Courtesy of a post by home services site Angie’s List, we now have detailed layouts to pore over. They created floor plans of our Captains’ quarters, starting with Kirk’s in The Original Series to Archer’s on Enterprise. Discovery is a bit trickier Captain-wise, since we only have the late unlamented Lorca’s rooms for reference—but maybe Pike will show us where he lays his head in the future. 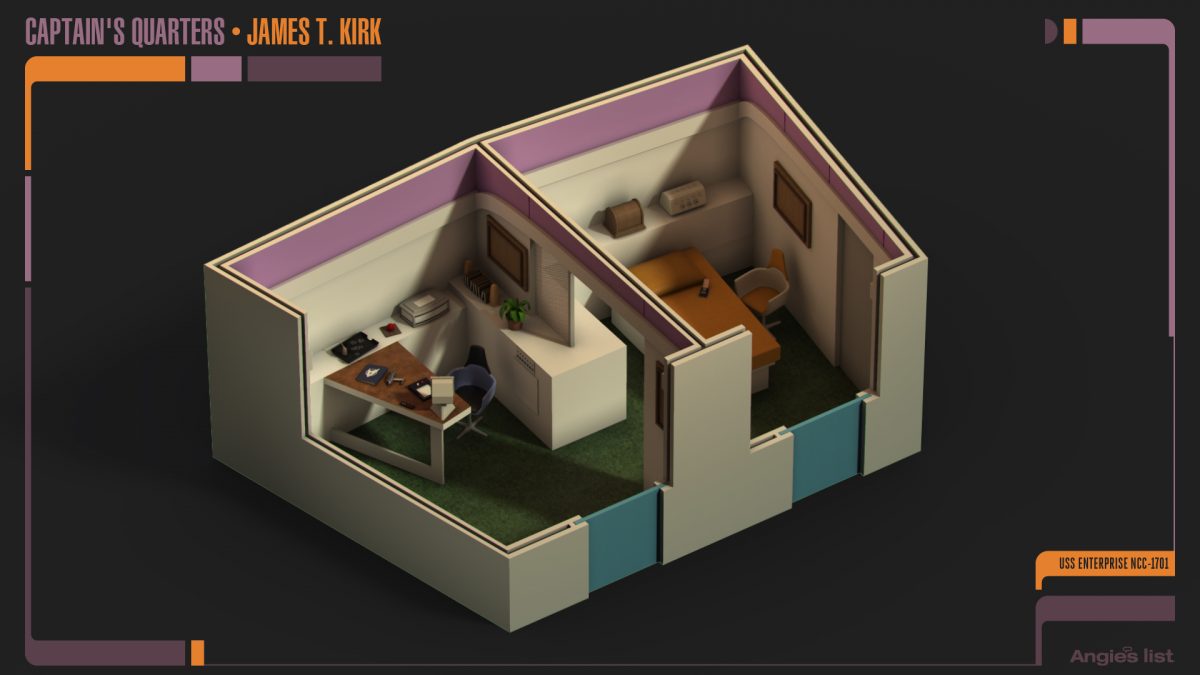 The original (and, ahem, the best) Captain James T. Kirk had a small, spare combined living space and bedroom. It has a ’60s-dreaming-of-the-future flair, with some collected artifacts you can see in the picture up top. It’s hard to imagine our energetic Captain penned up in here for long (except, perhaps, in that bedroom). No wonder he was always roaming the halls and spoiling for a fight (or a game of three-dimensional chess with Spock).

Angie’s List notes: Along with a bed, Kirk’s only other furniture were a desk and chair for working on his personal computer, without even a window to see the stars flying past. He had minimal decorations and personal effects, and were as one alien queen described them: “Your quarters are quite like you, Captain: austere and efficient, and in their own way, handsome.” 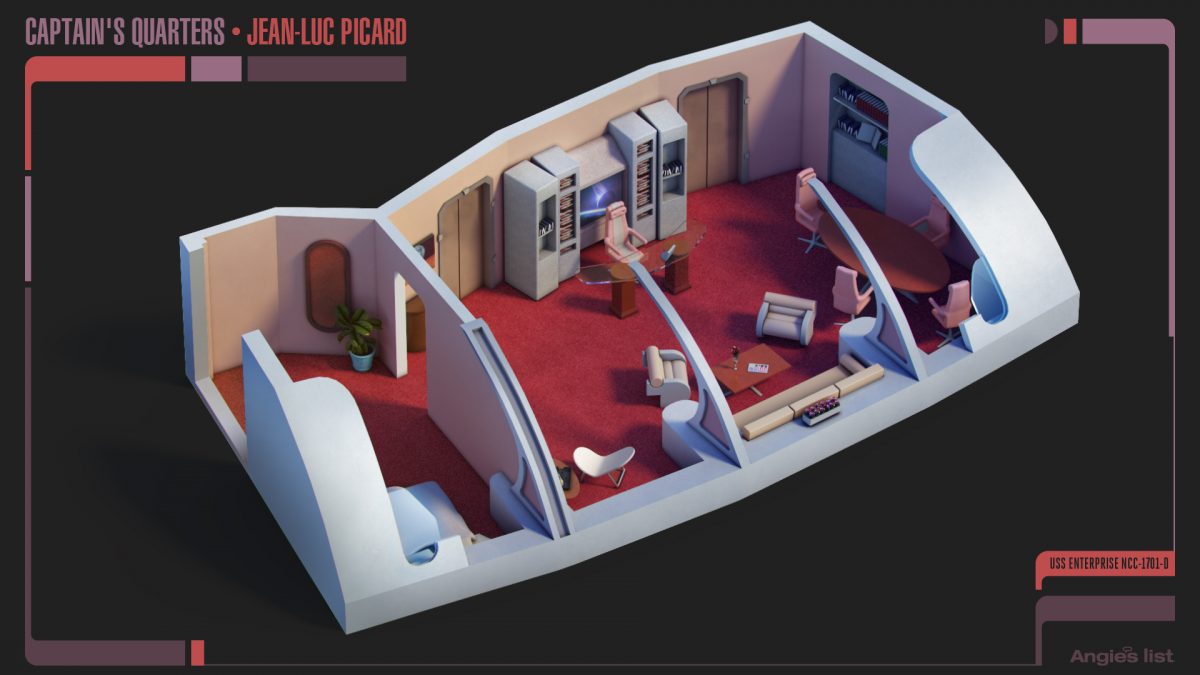 Fittingly, our worldly Captain Jean-Luc Picard has a more sophisticated setup onboard his Enterprise. Of course Picard seems to have two rooms designed entirely for the purposes of reading, plus his own in-house conference table for meetings on the fly and/or gourmet dinner parties. Sleek and yet still inviting relaxation with a good book in hand, I think I could pick these quarters out as Picard’s even without a label. 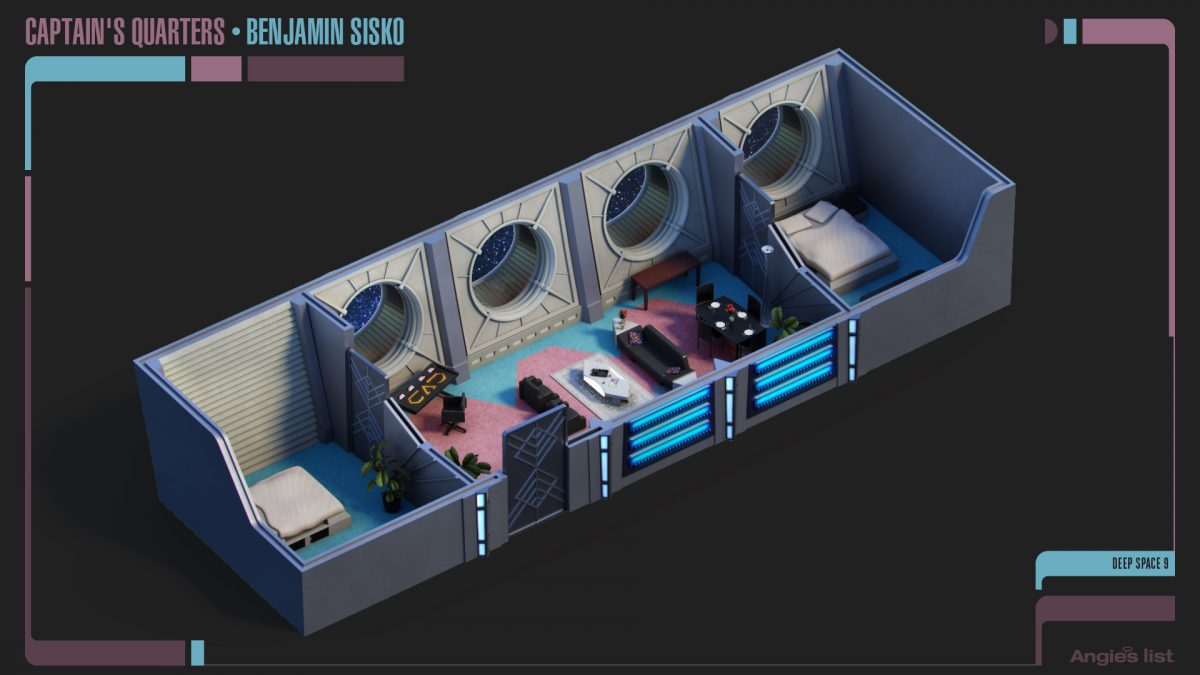 My personal fave Ben Sisko had more permanent-feeling quarters on Deep Space Nine, though the station’s conversion from its origin as a Cardassian mining station and its use in wartime gives his rooms a different foundation than those aboard a Starfleet vessel. Sisko was our only Captain to have a child on TV, and Jake’s room is incorporated as well (the literary Jake needs a writing desk, though).

I love the big round windows that let in all that space and stars, and a lookout point for trouble coming from the wormhole. Sisko’s living space seems lived-in and reflects his sociable personality. 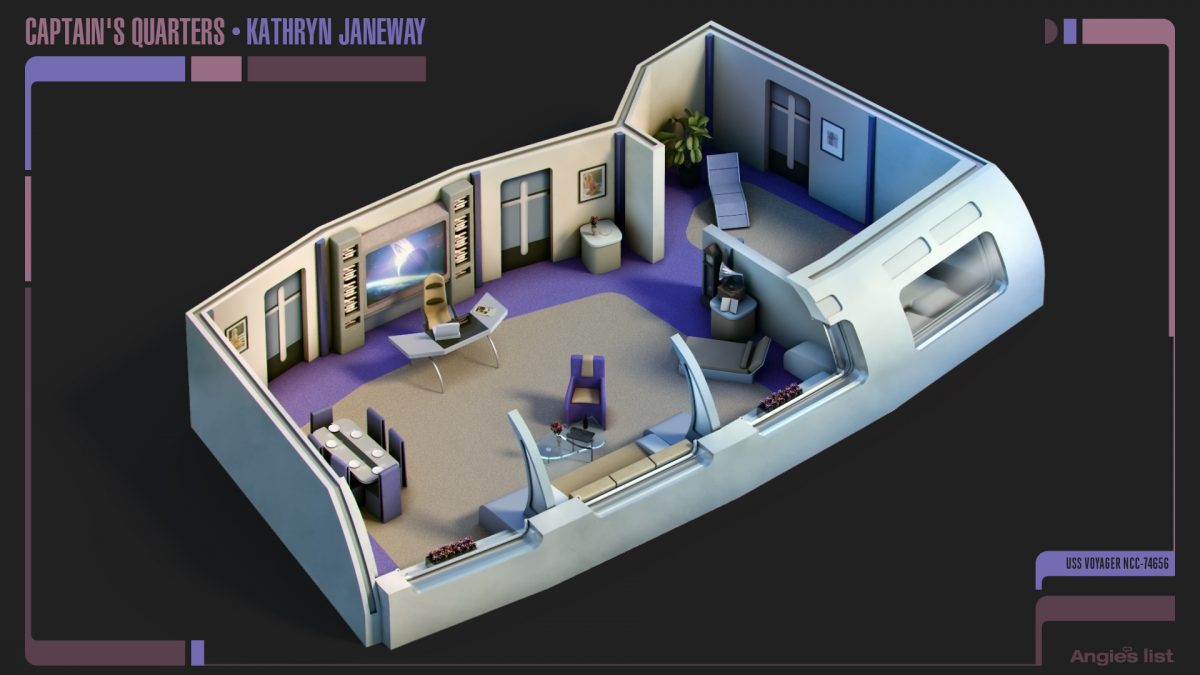 Our first lady Captain’s quarters on Voyager look light and airy and modern (and I love the purple). Captain Kathryn Janeway was ready for action with a central administrative desk and a large screen, but like Picard and Sisko, she also has some cozy nooks. She’s embellished her quarters with personal touches like artwork on the walls, a prominent plant, and old Earth tech like the gramophone. Her dining room setup is less conference room like Picard’s and more ready for the dinner party. 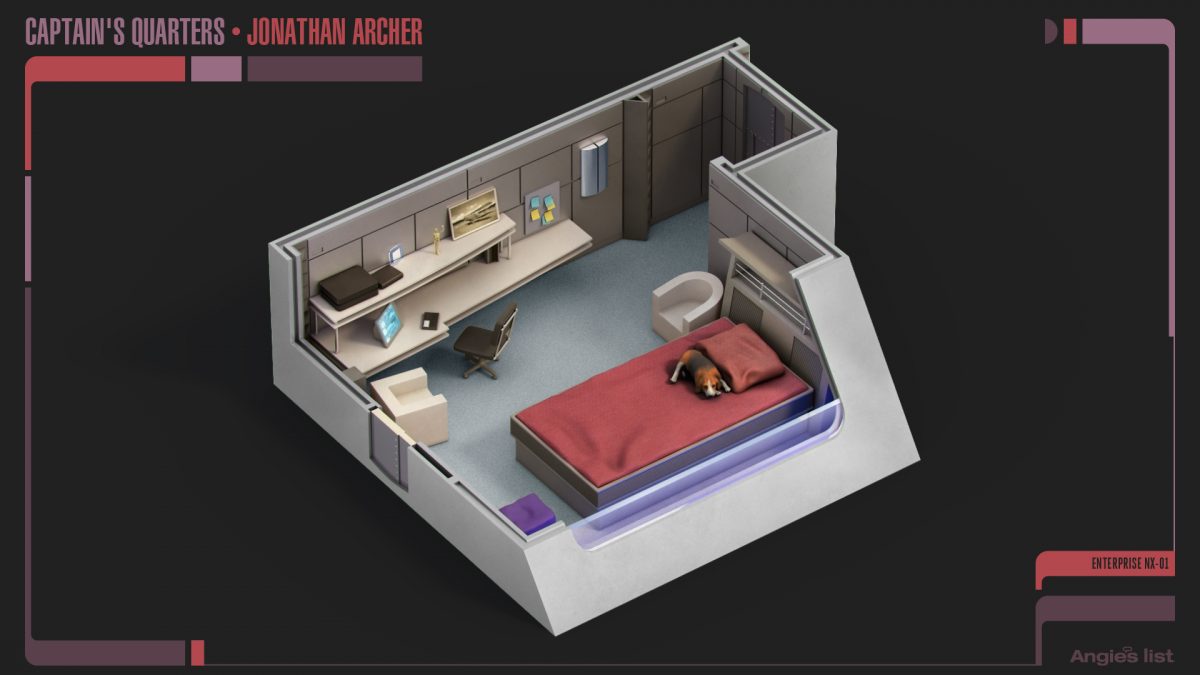 As Angie’s List points out, “Star Trek went back in time for its next series, so Captain Jonathan Archer’s quarters on board the early version of the Enterprise were much more basic than the rest of the captains who have been featured.”

We’re back to spare design with Captain Jonathan Archer’s Enterprise quarters, a reminder that this is a Starfleet ship and not a pleasure vessel. Of course, most prominently featured here is Archer’s beloved pet Beagle Porthos, who is notably not residing on his own bed. 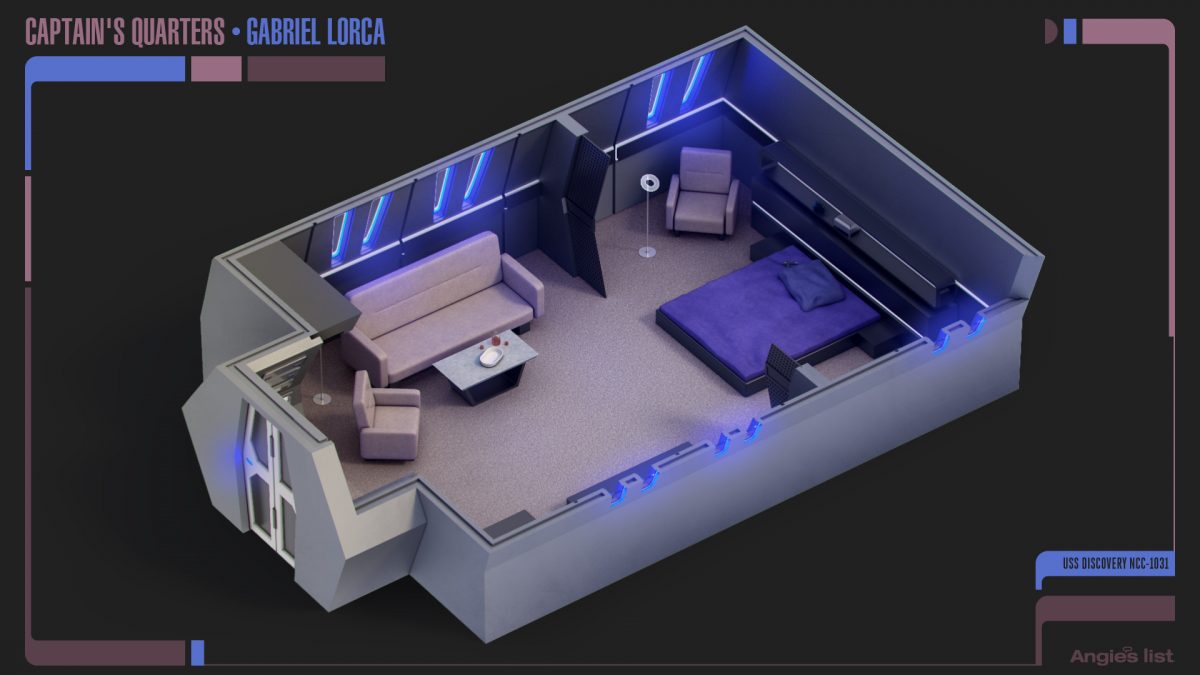 Since Discovery takes place before The Next Generation, the production team couldn’t suddenly go wild with a lavish Captain’s quarters for Gabriel Lorca. But they’ve incorporated some of that evocative Janeway purple as well as the relaxation areas favored by Picard and Sisko.

Angie’s List notes that, tellingly, “There was little in the way of personal items in his quarters, though most of his possessions seemed to be kept in his creepy ‘menagerie’ elsewhere on Discovery.” Maybe it was difficult for Lorca to populate his quarters with a real personal touch, considering that he was an imposter.

I love getting to see this detailed slice of interior starship life. Which Captain’s quarters are calling to you? If I could move in anywhere right this moment, I’d go for Janeway’s.