How Many Star Trek Episodes Pass the Bechdel Test? | The Mary Sue

How Does Your Favorite Star Trek Series Fare on the Bechdel Test? 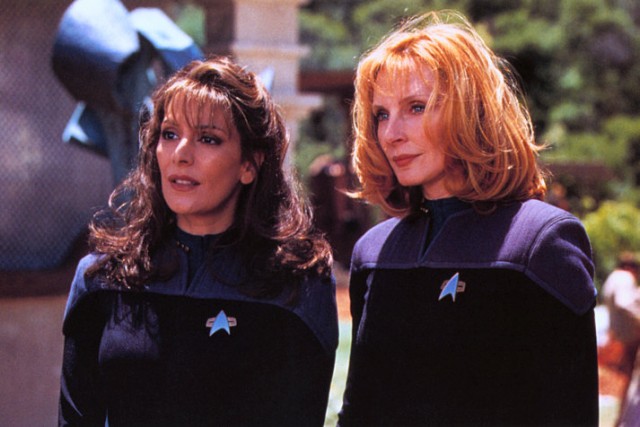 A little over a year ago, with the help of a few other Trekkies I met through Tumblr, I took on a huge but super-fun project: running each and every live-action Star Trek episode—from The Original Series through Enterprise—through the Bechdel Test. In case you’re not quite up to speed, the Bechdel Test started as a tongue-in-cheek commentary by Alison Bechdel on the state of mainstream media in her comic strip Dykes to Watch Out For. In order for a movie to pass:

It’s not a test of whether or not a movie is feminist (Star Trek [2009] only passes because Uhura and her roommate Gaila talk about a science project while Kirk is hiding under their bed secretly watching Uhura change). But if a show or movie can’t even meet this extremely basic standard, it can indicate a lack of women characters and/or that the ones who are there might be tokenized, stereotyped, or one-dimensional.

I knew the Trek movies didn’t stack up very well, but no one had tested the episodes. Trek still has a huge place in our culture, impressive fan series are coming out all the time, we’re expecting another movie in 2016, and the rumors that we might one day get another series persist. So it’s important to figure out what worked and what could’ve been improved in terms of representations of women and other underrepresented groups. The future society portrayed in Star Trek was supposed to show greater equality for women (as well as people of color, although it seriously overlooked LGBT characters). But inequality behind the scenes, as well as trying to market a show based on conventional wisdom about what modern audiences want (more catsuits, maybe?), created tensions with that egalitarian vision.

Here are the results for the series overall. The percentages represent the percentage of episodes of that series that passed the Bechdel Test. 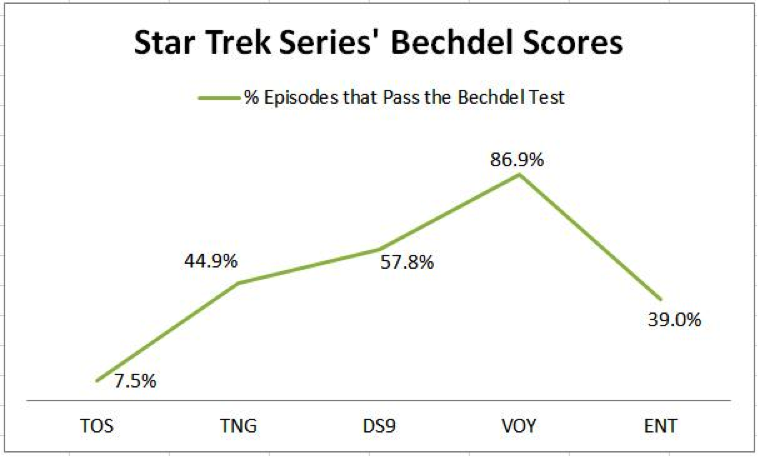 I think the only thing that surprised me was how well The Next Generation did. I expected to see the numbers reversed, with Enterprise doing a bit better, but it turns out I’d forgotten how many awesome female one-off characters and recurring guest stars there were in TNG, including a wealth of named female ensigns, bad-ass admirals, well-respected diplomats, and controversial scientists. And of course, Guinan. 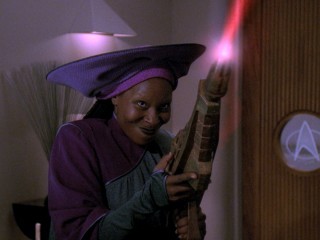 Guinan’s got it under control

Even Troi and Crusher interacted more and more meaningfully than Hoshi and T’Pol on Enterprise. Enterprise not only did pretty poorly considering it ran in the twenty-first century, but many of the episodes that passed just barely made it, thanks to Hoshi and T’Pol exchanging two or three lines about something on the ship. Where were the high points? You can get a clearer idea by looking at the breakdown by season: 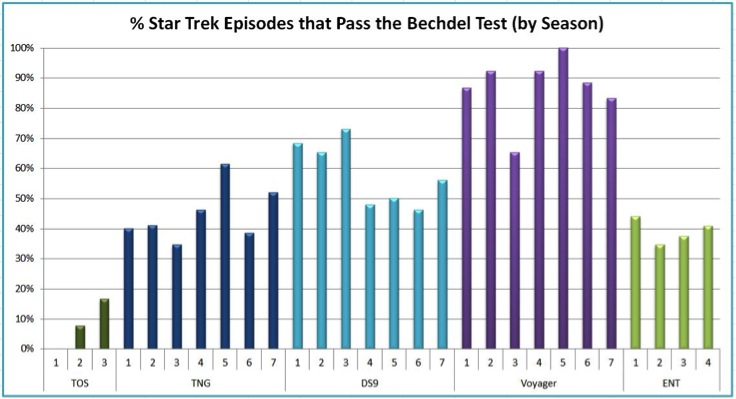 Behold the awesome power of the Janeway. Voyager  had the only Trek season (five) where every single episode passed the test! Even many of the episodes that failed were Janeway-centric but just showed her interacting with men. Having a female captain made a huge difference, but I think having two other main female characters, including B’Elanna Torres as chief engineer, was almost as important a factor. Very few episodes went by where we didn’t get Janeway and B’Elanna discussing the transporters, the warp drive, the impulse engines, or other issues around the ship’s mechanics.

Deep Space Nine comes in pretty much in the middle of the pack. There were actually a lot of women characters in diverse roles, but it felt like we got to see more of their working and personal relationships with men (e.g. Kira and Odo, Dax and Sisko, Dax and Worf, Keiko and Miles, Kai Winn and Sisko and Dukat, the Female Shapeshifter and Odo) than with other women.

The Bechdel Test has its limits, as I mentioned at the beginning. And issues did arise during this process. One thing was figuring out how to test pesky group scenes. For example, the senior staff are all in Ops and Dax and Kira each say something one after each other, but not clearly to each other. In the end I created two sets of results, one that interpreted the test a little more loosely by including scenarios like that. In retrospect, I don’t think that was necessary and I didn’t use those higher numbers in the results above.

Another question I considered was whether to pass women talking about a man in a work-related (as opposed to romantic) context. There were times when it seemed like it would make sense with the spirit of the test—like passing Dr. Crusher and Nurse Ogawa talking about a collapsed male patient’s medical condition—but it seemed to open the door too much. Ideally, an episode would have more than one scene of women talking, so it wouldn’t be the determining factor.

Part of why the Bechdel Test is so useful is that it’s such a low standard that it’s surprising that so many things fail, and it’s hard to argue there’s not room for improvement. I found it impossible to think of a single episode that would fail a reverse version of the test. Even the TNG episode “Angel One,” which is set on a matriarchal planet, has two men talking with each other about something other than a woman right away in the first three lines, and then 13 more times in the rest of the episode!

I want the next Trek movie and/or show not to continue the downward trend we saw with Enterprise but to take on the challenge of outdoing Voyager on the Bechdel Test. And the test can’t get at this, so I have to also mention I want more characters of color and LGBT characters (seriously overdue!). It shouldn’t actually be all that difficult, and it might actually help your bottom line! Just take this handy-dandy reminder from Worf (in “Suddenly Human”): “You are human, and among humans, females can achieve anything the males can.” 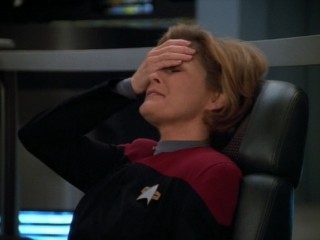 Every time a Star Trek episode fails the Bechdel Test, Captain Janeway does a facepalm

[Correction: In my initial calculations for this post I counted the Voyager pilot, “Caretaker,” as a fail when it in fact passes the test, because Janeway and Kes talk about getting down to the Ocampan settlement through the tunnels. That means Season 1 of Voyager is actually at 93.8%, and the series overall gets bumped up slightly to 87.5%.]

Jarrah Hodge is a feminist blogger from Vancouver, B.C. She runs the feminist blog gender-focus.com, and analyzes Star Trek from a feminist perspective at trekkiefeminist.tumblr.com. You can also find her on Twitter @jarrahpenguin.