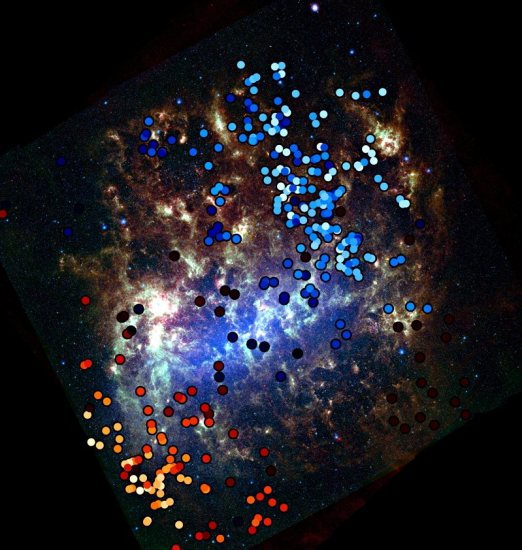 Astronomer’s at the National Optical Astronomy Observatory were casting their roving eyes around the sky when they noticed something odd going on in the Large Magellanic Cloud (LMC), one of our neighboring galaxies. It seems that the LMC has made a habit of stealing stars from the nearby Small Magellanic Cloud (SMC) and claiming them for itself.

You might be wondering how anyone could determine the origin of a star, let alone figure it out from Earth. It all has to do with spin and composition. It’s believed that most stars in the LMC were formed out of a spinning disc of dust, which would give the stars the same spin. But when the astronomers observed the spectra of some 5,600 stars in the LMC, they found that about 5% of them had a different spin from the rest of the stars in the galaxy.

This was a tantilizing hint that something was going on in the LMC, and led the astronomers to investigate the chemical composition of the stars. The researchers found that these odd-spining stars lacked the hallmark heavy elements — such as iron and calcium — that most LMC stars have. However, the nearby SMC was rife with stars which lacked such metals, suggesting that it was the original home of these wayward stars.

What does this mean for us on Earth? Not much, but it does demonstrate the amazing events happening far above our sky, and that we’re starting to get clever enough to notice.