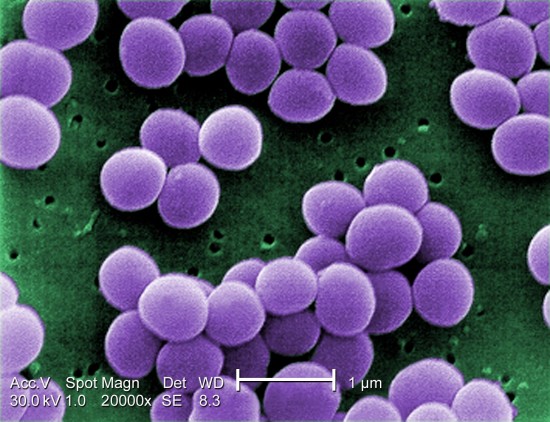 Most people probably don’t think twice about the safety of the meat they pick up from the grocery store or are presented with in a restuarant, but a new study just published in Clinical Infectious Diseases could change that and turn your stomach in the process. The study, lead by Lance B. Price, Ph.D. from the Translational Genomics Research Institute, found that most meat in the American food supply is infected with staph bacteria. Moreover, many of these bacterial strains were found to be resistant to one or more antibiotic treatments.

A quick note: since most of the bacteria were not entirely resistant to beta-lactams (oxacillin, for instance) they don’t qualify for the monicker of MRSA. They also don’t seem to causes food poisoning. Instead, these bacteria tend to live in human skin, and generally don’t immediately cause illness. That doesn’t mean they aren’t scary, though.

The study, which covered 26 supermarkets in five cities across the country, looked at various cuts of pork, turkey, chicken, and beef. The researchers then did multiple rounds of testing to determine the presence of Staph, the strain, and the bacteria’s drug resistance. They found that 47% of the meat sampled contained Staphylococcus aureus, that 96% of that was resistant to antibiotics, and that 52% of the infected samples were resistant to three or more treatments. Wired has the full break down of the drug resistance, with a shocker at the end:

The antibiotics to which the staph was resistant included: penicillin and ampicillin; erythromycin; tetracycline; oxacillin, the more modern form of the drug methicillin; the drug combination quinupristin/dalfopristin, known as Synercid; the fluoroquinolones levofloxacin (Levaquin) and ciprofloxacin (Cipro); and the last-resort drugs for very serious staph infections vancomycin and daptomycin. One staph isolate was resistant to nine different antibiotics.

Interestingly, the distribution of antibiotic-resistant staph was not consistant across the different meats. Turkey topped the study with 77% of the samples having resistant bacteria, with pork at 42%, chicken at 41%, and beef with 37%. The strain of staph was different between meats as well. Speaking with Wired, Price said:

“We found that each of the meat and poultry types had their own distinctive staph on them. That provides strong evidence that food animals were the primary source of the resistant staph. The source wasn’t human contamination of the meat at slaughter, or when it was packaged for retail sale.”

This is likely to raise alarm with those already concerned about the use of antibiotics in the factory farms. The research does seem to support the claim that widespread antibiotic use is creating drug resistant diseases. Moreover, the U.S. does not test for MSRAs in meat, and since these are not MSRAs they would continue to go undetected.

As stated earlier, these varieties of staph don’t seem to pose an imminent threat to human health. Obviously these bacteria have been in our food supply for some time and not caused a great stir. But that does not mean there is no danger here. The Wired article points out that the drug resistant properties of these Staph bacteria could cross contaminate with other, nastier bugs that would be extremely hard to treat.

Though these bacteria seem relatively benign for the moment, their resiliance and the fact that they have gone unnoticed for so long certainly gives pause. It’s probably a good thing that this research has arrived now, before these strains are connected to truly dangerous outbreaks.

(via Wired, image via Wikipedia)