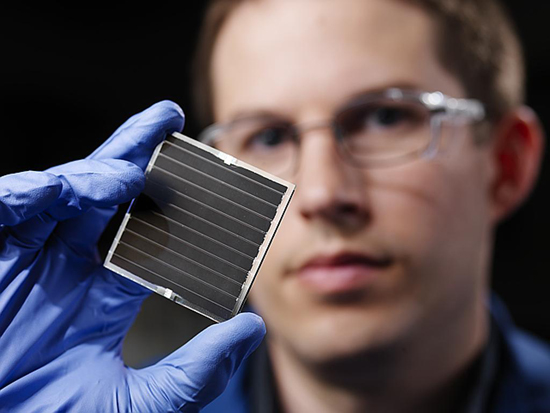 Generic solar cells are made with a significant amount of silicon. Unfortunately, silicon can be pretty scarce, expensive and toxic. So a variation was made by replacing the silicon with the semiconductor titanium oxide in a dye-sensitized solar cell. This is referred to as a Grätzel solar cell. Even more unfortunately, these can leak and tend to have a short shelf life. But a team at Northwestern University may have solved all that by developing a stable version of the Grätzel cell.

The traditional Grätzel design includes an electrolyte made from an organic liquid that can leak and corrode the cell. In order to prevent leaks, the group at Northwestern simply limited the liquid aspect of the design. A combination of cesium, tin, and iodine is added to the dye-coated particles in liquid form but then solidifies.

Traditional silicon-based solar cells have a conversion rate around 20 percent of the light they take in while the regular Grätzel design converts near 11 or 12 percent. Improvements on the Grätzel have been slow to development due to the leaking problem. Northwestern’s version was shown to convert at 10.2 percent but leaves open the possibility of major improvements now that the solid won’t spoil the cell over time.

Even if the efficiency fails to be significantly improved, the lower costs and increased durability provided by the new design might win the day and see commercialization. If so, it could mean an increase in cheap, sustainable energy.