Your toast can now get you drunk! 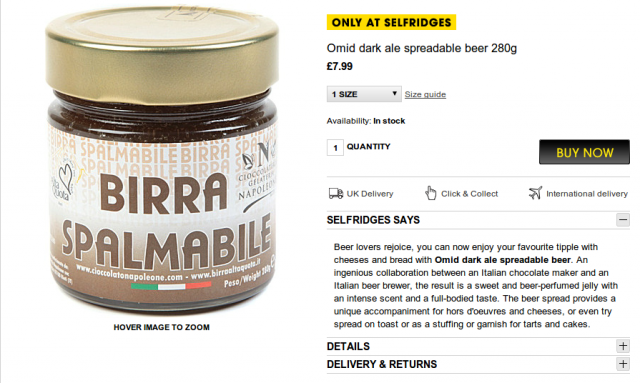 An Italian brewery and an Italian chocolatier came together to invent beer you can spread like Nutella, so let’s all take some time this long weekend to write them a thank you note, because now that’s a thing that exists. This is groundbreaking because now sandwiches can get you drunk.

The spreadable beer was a collaboration between brewer Emanuela Laurenzi and chocolatier Pietro Napoleone. Laurenzi said at first he thought Napoleone was making fun of him suggesting that people could eat his beer, but he wasn’t kidding.

Using chemistry, Napoleone and Laurenzi worked out a way to thicken the beer into a creamy, smooth consistency. The result is basically beer Nutella, and that sounds amazing. It comes in two flavors, one made with a light beer, and one with a dark.

It looks like the spread was actually invented last year, but it seems to be catching on now, and news of the amazing creation has made it out of Italy and into my dreams. Sadly, the spreadable beer is not available through any U.S. distributors because none of them want me to be happy.

Selfridges & Co. sells a 280g jar of the spread for the perfectly reasonable sounding £7.99, which sadly does not include international shipping. To ship internationally it will cost £25.00 extra, but right now Selfridges does not ship to the U.S.

But according to their website, they will begin shipping to more countries including the U.S. in the next few months.

Sure, even when they do start shipping here one jar will end up costing more than $50, but for the experience of spreading beer on a piece of toast and then eating that beer? Seems worth getting some friends together to chip in, no?

(via Consumerist and CCTV, image via Selfridges & Co)