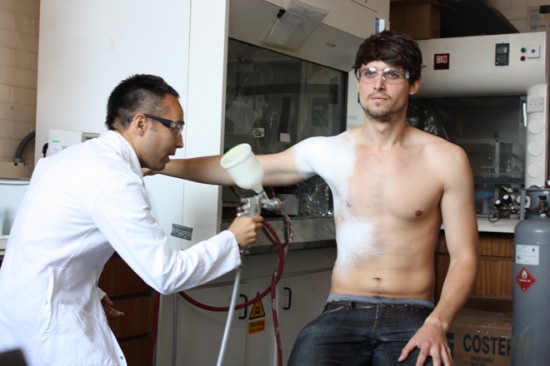 When in life has anything with integrity ever come out of a spray bottle?  We’ve already got spray cheese, non-dairy whipped “cream,” pungent odors, and global warming; now we can add this prototype of spray on clothing.  But hey, it’s the future now, right?  Maybe the stuff isn’t all bad.

After the spray dries, it creates a thin layer of fabric that can be peeled off, washed and reworn.
“In my quest to produce this kind of fabric, I ended up returning to the principles of the earliest textiles such as felt, which were also produced by taking fibers and finding a way of binding them together without having to weave or stitch them,” says [fashion designer Manel] Torres.

So… it’s like dryer lint?  Actually, after watching the video, we think it looks much more like silly string.

The one pressing question that the article doesn’t answer is what happens when you spray this stuff over other fabrics.  I think I speak for a lot of women when I say that I don’t have much use for a form fitting shirt if it only fits my form when I’m not wearing a bra.

To be fair, this stuff is just a prototype.  And it can already be manufactured in different colors and in different substances, natural and synthetic.  One particularly intriguing use for it wouldn’t be clothing but bandages that could be layered on a wound without disturbing it. (And, yes, we’ll be filing this away in our “graphic novel sources” for later.)

On the other hand, the stuff smells powerfully of the solvent that’s used to keep it a liquid until sprayed on.  Wired says it will be “at least a few years” before the stuff will be ready for retail.

The video below shows how to make a sort of scarf out of the stuff.